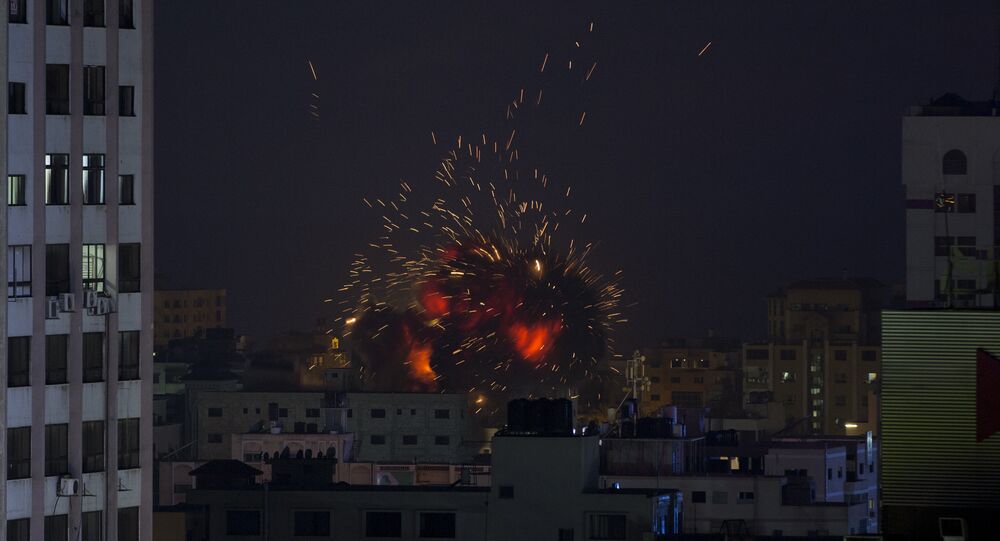 TEL AVIV (Sputnik) – The Israel Defence Forces (IDF) have attacked over a dozen targets in the Gaza Strip, including a weapons manufacturing site, following the Tuesday launch of two rockets, fired from Gaza, the IDF said in a statement.

"Our fighter jets struck 15 terror targets in #Gaza in response to the rockets fired at #Israel earlier tonight," the Israel Defence Forces said in a statement on Twitter, adding that the targets included "a weapons manufacturing site" and a "Hamas terror tunnel".

Our fighter jets struck 15 terror targets in #Gaza in response to the rockets fired at #Israel earlier tonight.

On Tuesday, Israel’s defence system intercepted two rockets fired from Gaza toward the Israeli port cities of Ashkelon and Ashdod.

Israeli Prime Minister Benjamin Netanyahu was evacuated from Ashdod where he was holding a pre-election meeting.

Hamas, a Palestinian Sunni militant organization in control of the Gaza Strip, has been locked in a protracted on-and-off conflict with Israel, which refuses to recognize Palestine Autonomy as an independent political and diplomatic entity.

Last week, the IDF struck Hamas positions after a drone launched from the Gaza Strip attacked an IDF vehicle.

Tensions between the Israelis and the Palestinians near the Gaza border have been mounting for months. The Israeli authorities have been blaming Hamas for Gaza residents’ aggressive actions toward Israel. At the same time, Palestinians are protesting against the Israeli reluctance to recognize Palestine Authority as a separate political entity.

IDF Says Rockets Were Fired From Syrian Territory Near Damascus, But Failed to Hit Israel