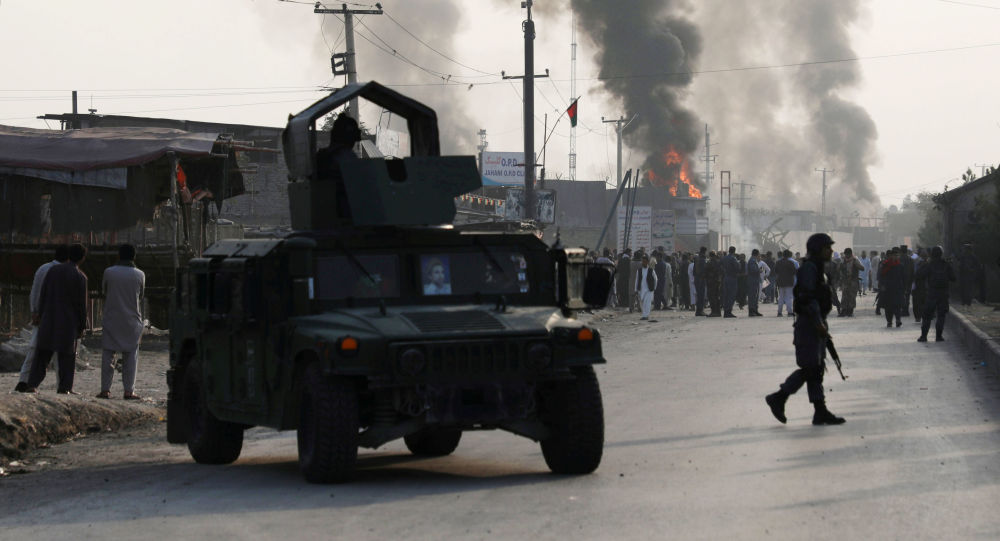 Photos: Rocket Explodes Near US Embassy in Kabul

A rocket reportedly exploded near the US embassy in the Afghan capital city shortly after midnight on the anniversary of the 9/11 terror attacks, AP said.

#Breaking: Just in - Huge explosion being reported in #Kabul, near the #US embassy building in the exclusion zone of #Afghanistan. pic.twitter.com/3WXRlIUqiF

According to AP, citing embassy officials, a projectile exploded just minutes into Wednesday. Inside the embassy, the staffers reportedly heard that the blast had been caused by a rocket that hit the compound.

Officials at the compound declared an all-clear about an hour later and reported no injuries, according to the media report. The nearby NATO mission also said that no personnel had been injured, AP reported.

According to AFP, citing Afghan's interior ministry spokesman, Nosrat Rahimi, "a rocket hit a wall at the defence ministry, with no casualties reported".

No one has claimed responsibility for the attack.

Violence in Afghanistan has escalated amid talks between the United States and the Taliban movement, which has in recent days conducted a number of terrorist attacks that have killed dozens of people in the war-torn country.

On Monday, US President Donald Trump said that US peace talks with the Taliban were 'dead' after the group claimed responsibility for an attack that killed a US service member in Kabul on 5 September.

Afghan President Ashraf Ghani reiterated, however, his commitment to the people-owned peace process amid the breakup of the US-Taliban peace talks. In turn, the Taliban vowed to continue fighting against American forces in Afghanistan after the US president withdrew from peace talks.

The US and the Taliban have for nearly a year been attempting to negotiate a peace deal that would ensure the withdrawal of foreign troops in exchange for the movement's guarantee that the country will not become a safe haven for terrorists. The talks, however, excluded the Afghan government, as the Taliban considers it a US puppet.

Afghanistan has long suffered with unstable security. The government has been fighting the Taliban, which has been waging a war against Kabul for almost two decades.

The United States and its allies launched a military operation in Afghanistan in 2001 after the 9/11 attacks, organized by the al-Qaeda terrorist group, which was at the time backed by a Taliban-led government of Afghanistan.

*The Taliban, al-Qaeda are terrorist groups banned in Russia and many other countries.