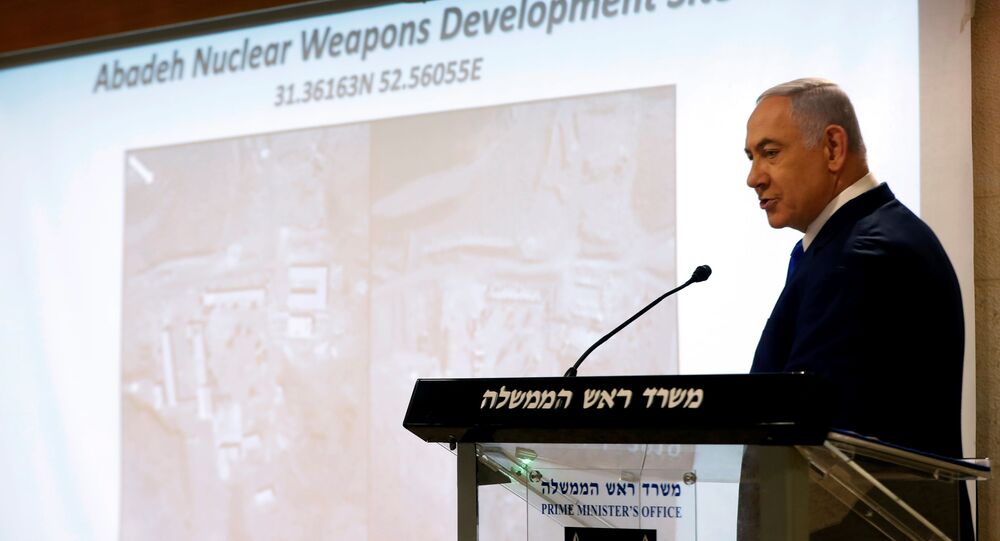 Previously, in April and September of 2018, the Israeli prime minister reported 'Mossad intelligence information' which he said exposed an alleged clandestine Iranian nuclear programme operating in contravention of Tehran's commitments to the 2015 nuclear deal. Iran has dismissed all the claims.

"The possessor of REAL nukes cries wolf - on an ALLEGED 'demolished' site in Iran," Zarif tweeted on Monday, commenting on a presentation given by Israeli Prime Minister Benjamin Netanyahu earlier Monday about a new 'secret Iranian nuclear facility'.

"[Netanyahu] and the #B_Team just want a war, no matter [the] innocent blood and another $7 TRILLION," Zarif added, the 'B Team' comment a reference to Netanyahu, hawkish senior Trump advisor John Bolton, Saudi Crown Prince Mohammed bin Salman and UAE Crown Prince Mohamed bin Zayed, each of whose names have the letter 'b' in them. The "$7 trillion" was presumably a reference to President Trump's criticism of his predecessors, whom he accused of spending $7 trillion on "endless wars" in the Middle East.

Zarif accompanied the tweet with a 2002 video clip featuring Netanyahu's testimony to US lawmakers in the runup to the Iraq War, with Netanyahu promising "enormous positive reverberations" for the entire Middle East if Saddam Hussein's government was toppled. "This time, he assuredly won't be on the sidelines watching," Zarif warned.

Speaking at a press conference in Jerusalem on Monday evening, Netanyahu said that a facility in the city of Abadeh, central Iran had been engaged in the development of nuclear weapons, but was dismantled after Iranian authorities discovered that its existence had been uncovered by Israeli intelligence.

This site was said to have featured in the tens of thousands of pages of 'nuclear archives' allegedly discovered by Israeli intelligence operatives in 2017, the Israeli prime minister added. He did not go into detail as to what sorts of experiments were carried out at the site.

"A year and a half ago, we exposed Iran's secret nuclear archive which revealed that Iran was developing five nuclear warheads as early as 2003," Netanyahu recalled.

"Even before that, Iran knew we were on to them, and so they cleared the [Abadeh] site. They cleared it...and then they actually covered up the site. This is an actual cover-up. They put gravel on it to try to hide their traces, but they didn't," the Israeli prime minister said, showing alleged satellite photos of the demolished alleged nuclear facility.

According to Netanyahu, the International Atomic Energy Agency (IAEA) had "found traces of uranium that Iran hid in these sites. That's a direct violation of the Non-Proliferation Treaty," he said.

The UN's nuclear watchdog has yet to comment on Netanyahu's presentation. Earlier in the day, IAEA acting director-general Cornel Feruta told reporters that he had had "very substantial discussions with Iranian senior officials," and that he had been "pleased with the tone and the input that we received in those conversations."

Netanyahu called on the international community to "wake up" and to join the US and its allies in putting "pressure, pressure and more pressure" on Iran.

Netanyahu has repeatedly accused Iran of "lying" about its nuclear-related activities. In April 2018, he gave a presentation on an alleged Iranian "Atomic Archive," containing some 55,000 pages of documents allegedly seized by Israeli commandos during a 2017 raid on an Iranian nuclear facility outside Tehran, which he said proved that Iran had lied to the world about its commitments to the 2015 Joint Comprehensive Plan of Action nuclear deal. Soon after the presentation, in May 2018, the Trump administration announced its unilateral withdrawal from the nuclear deal.

Several months later, in September 2018, in a speech to the UN General Assembly, Netanyahu gave another speech, alleging that Mossad had uncovered a second 'secret atomic warehouse' where Iran allegedly hid nuclear materials from UN inspectors.

Israeli claims about the threat of an Iranian nuclear weapons programme go back over a decade.

© AFP 2020 / Don Emmert
Benjamin Netanyahu, Prime Minister of Israel, uses a diagram of a bomb to describe Iran's nuclear program while delivering his address to the 67th United Nations General Assembly meeting September 27, 2012 at the United Nations in New York.

Iranian officials have repeatedly dismissed Netanyahu's claims in the past, calling them "ridiculous," and accusing Tel Aviv of "trying to see what outlandish claims they can get a Western audience to believe." Iranian Foreign Minister Mohammad Javad Zarif has also criticised Israel for its alleged 'double standards', saying following the September 2018 UN presentation that amid speculation over Iran's nuclear activities, Israel was the "only regime in our region with a secret and undeclared nuclear weapons programme - including an actual atomic arsenal."

Following Netanyahu's presentation Monday, Yair Lapid, co-leader of the opposition Blue and White Party, accused the prime minister of engaging in pre-election "propaganda" at the expense of Israel's national security. "The Iranian nuclear programme cannot be used for campaign Shenanigans," he tweeted. Israel is set to hold snap legislative elections later this month after Netanyahu's Likud Party and its allies failed to form a coalition government after elections in April.