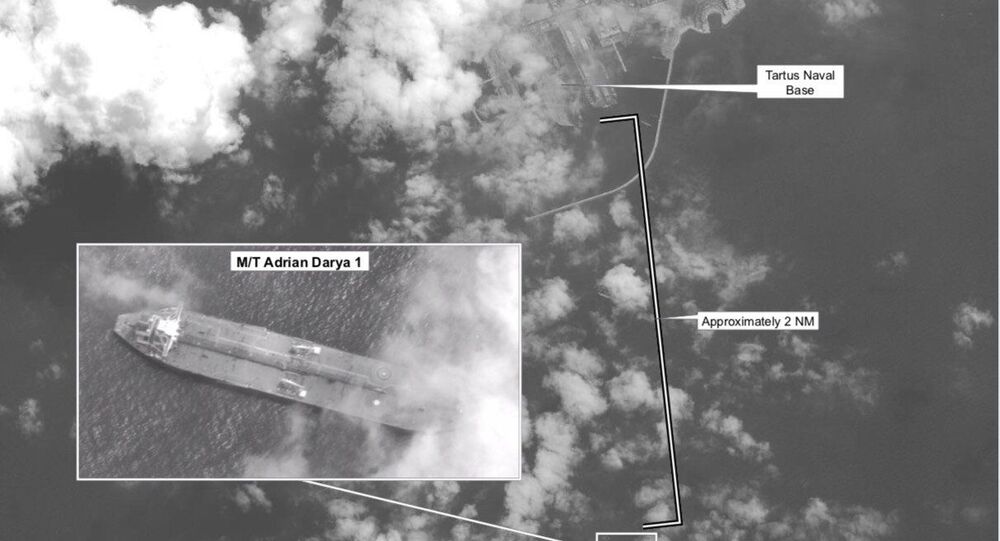 The US Treasury recently updated its advisory on Iran sanctions related to the Adrian Darya 1 tanker, while the State Department reportedly attempted to bribe the ship’s captain, an Indian national, while threatening him with personal sanctions if he didn’t surrender his ship over to the US.

US President Donald Trump's National Security Advisor John Bolton has tweeted what appears to be a satellite image of the Adrian Darya 1 tanker, with the image showing the ship loitering approximately two nautical miles off the coast of the Tartus naval facility in the Mediterranean Sea in western Syria.

Anyone who said the Adrian Darya-1 wasn’t headed to #Syria is in denial. Tehran thinks it’s more important to fund the murderous Assad regime than provide for its own people. We can talk, but #Iran’s not getting any sanctions relief until it stops lying and spreading terror! pic.twitter.com/saar05T8wt

In the tweet, Bolton accused those who believed the tanker wasn’t going to Syria of being “in denial,” and claimed that Iran “thinks it’s more important to fund the murderous Assad regime than provide for its own people.”

“We can talk, but #Iran’s not getting any sanctions relief until it stops lying and spreading terror!” Bolton added.

Bolton’s remarks followed reports earlier this week that the Adrian Darya 1 had been travelling somewhere between Cyprus and Syria, with its transponder turned off and its exact location unknown, amid US threats to sanction any regional country where the ship docked.

The US has repeatedly accused Iran of planning to ‘go back on’ its alleged commitment not to allow the tanker, previously known as the Grace 1, to sail to Syria following its release from detention in Gibraltar last month. However, Iranian authorities have insisted that Tehran never gave any guarantees that its tanker would not head to the war-torn country.

Last week, Iranian Foreign Minister Mohammad Javad Zarif took a shot at John Bolton and other hawks in the Trump administration, accusing Washington of resorting “to outright blackmail” following reports that the US had offered the Indian national captain of the Adrian Darya 1 and the captains of other Iranian vessels substantial amounts of cash in exchange for the ‘surrender’ of their ships to US custody, on penalty of personal sanctions against them.

Also last week, the US Treasury updated its advisory on Iran sanctions, threatening to blacklist any country, company or individual providing refuelling services to vessels “transporting petroleum or petroleum products from Iran.”

The Pentagon, meanwhile, insisted Thursday that it has “no plan right now” to seize the Iranian tanker.

Iran has insisted that it will continue to export its oil to “any and all buyers,” whether Washington likes it or not, and warned the US that all its efforts to bring Iranian oil exports down “to zero” will fail, just as its efforts to block Iran’s missile and peaceful nuclear programmes have failed.

Bolton’s tweet was met with criticism from some of his followers, who pointed to the US’s own funding of “extremist regimes,” and accused the Trump advisor himself of “lying.”

Of course, John Bolton knows all of these facts. He was instrumental in the rise of PNAC and the funding of militants around the globe (including but not limited to the Taliban and al Qaida). But he continues to lie to the public.

Killer of a million Iraqis wouldn't mind 19 million #Syrians living in #Syria to suffer cold during the winter or not be able to bake their bread and cook their food. Collateral punishment like a blockade is a War Crime by all definitions. :https://t.co/GczVcvcNhm