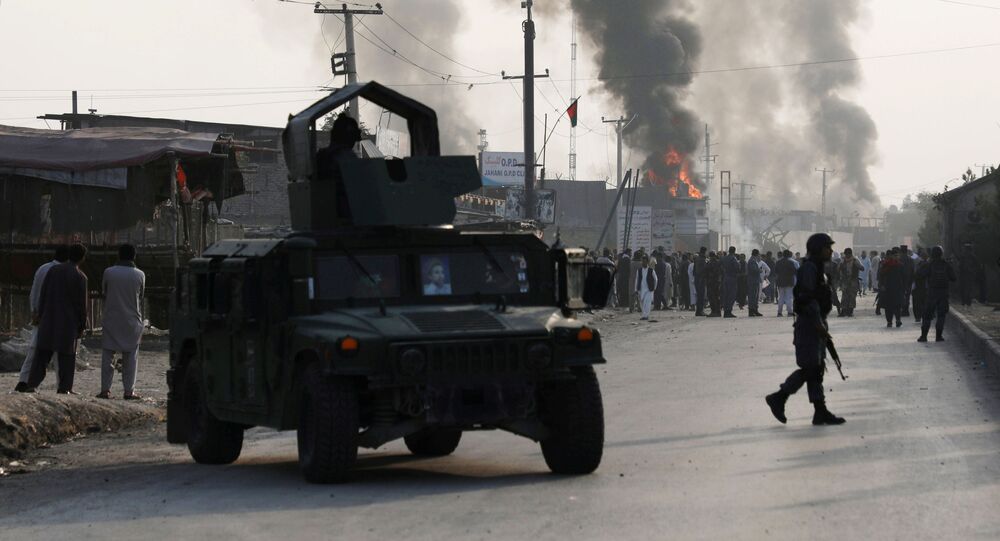 KABUL (Sputnik) - The residents of the Afghan capital's PD9 district took to the streets on Tuesday following a deadly Taliban attack to protest against the presence of foreign troops in the area, a Sputnik correspondent reported.

"There have been frequent bombings of this camp [of troops], which destroyed our homes, severely injuring the people living in this area. People have lost their lives and many more have been injured because of this. The camp is set up in a residential area and should be evacuated from the district. If the camp is not evacuated, people will continue their protests, as well," local resident Mohammad Kamal Afghan said.

Meanwhile, Afghan President Ashraf Ghani has condemned the Taliban's deadly attack and called it an act of terrorism.

"This is not the first time that the Taliban use such tactics, but the security forces cannot prevent them. Since the intelligence activities are weak, the Taliban easily perform their operations and reach their goals. On the other hand, the Taliban do not pay attention to the lives of civilians. Carrying out such heavy attacks in the city is a massacre," a former chief of the Afghan Air Force, Atiqullah Amarkhail, said.

On Tuesday morning, residents of the district took to the streets and blocked the highway east of Kabul, demanding that foreign troops be removed from the area.

The day before, a huge explosion hit the PD9 district just hours after US Special Representative for Afghanistan Reconciliation Zalmay Khalilzad‏ shared with the nation's leadership the details of a peace deal drafted by the Taliban and the United States.

The attack, which the Taliban have claimed responsibility for, killed at least 16 people and injured 119 more. The group said it was targeting the Green Village, which is a large area that houses foreign troops, aid agencies and international organizations.

The ninth round of peace talks between the United States and the Taliban in the Qatari capital of Doha finished on Sunday. The parties were negotiating a deal that would entail the withdrawal of foreign troops from Afghanistan in exchange for the Taliban's promise to cut ties to terrorist organisations and a guarantee that the country would not be used as a safe haven for terrorists. These negotiations have excluded the Afghan government since the Taliban consider it a US puppet.

The attack came amid the country's preparations for the September 28 presidential election. The Taliban oppose the election and have threatened to disrupt the process, while Kabul has meanwhile said it will ensure security during the voting.