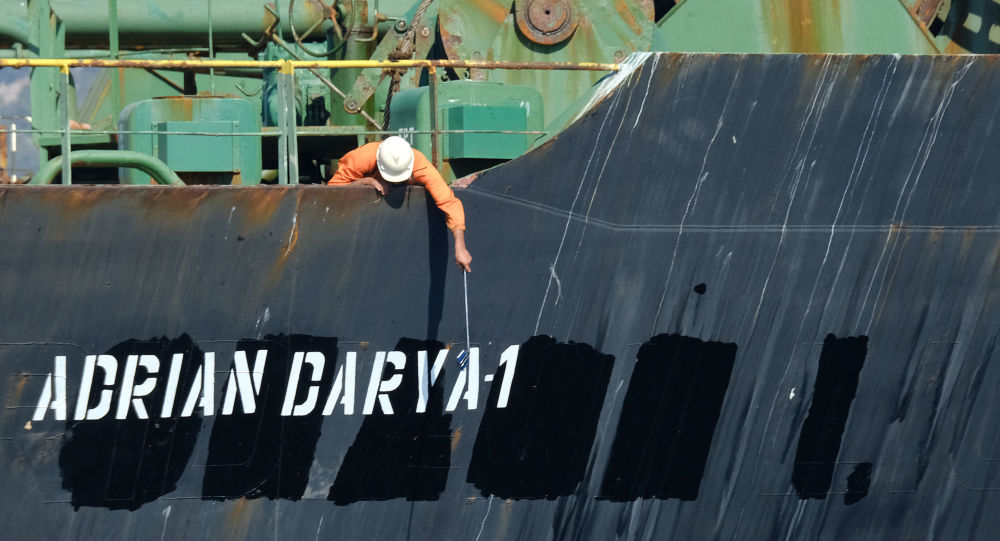 The Adrian Darya 1 tanker, formerly known as Grace 1, was released by Gibraltar authorities in mid-August after a month-long detention on suspicion of delivering oil to Syria in breach of EU sanctions. Shortly thereafter, the US issued a warrant to re-capture the tanker, which is said to be outside Lebanese territorial waters now.

An Iranian oil tanker, the Adrian Darya 1, has stopped 45 nautical miles west of Tripoli in northern Lebanon after a weekend circling the Mediterranean Sea, the ship-tracking website MarineTraffic.com claims.

According to the watchdog, the vessel's Automatic Identification System is not showing its destination after its crew previously listed it as ports in Greece and Turkey.

The same website earlier reported that the tanker was sailing toward the Turkish city of Iskenderun; however, Turkish Foreign Minister Mevlut Cavusoglu contended that the ship was on its way to Lebanon. Lebanese officials, in turn, have denied those claims.

Another ship-tracking website, TankerTrackers.com, asserted that the Adrian Darya 1 was off the coast of Syria on Sunday, tweeting that "it will be Syria's waters for STS [ship to ship] offloading in order to sail back to Iran via the Suez Canal".

And just as we tweeted that out, AD1 changed her destination yet again to “FOR ORDER”. We believe it will be Syria’s waters for STS offloading in order to sail back to Iran via the Suez Canal. #OOTT pic.twitter.com/qVzRwFN3F2

The tweet followed US Secretary of State Mike Pompeo's Friday claims that the Iranian tanker, previously known as Grace 1, was heading to Syria.

"We have reliable information that the tanker is underway and headed to Tartus, Syria. I hope it changes course", he said.

The Adrian Darya 1 was seized by Gibraltar authorities with the assistance of UK Royal Marines off the Gibraltarian coast on 4 July on suspicion of transporting oil to Syria in violation of EU sanctions. In mid-August, the ship was released after the British overseas territory reportedly announced that it had received written assurances from the captain that the vessel was not going to unload its cargo in Syria. Iranian authorities have denied making such statements.

Shortly after its release, the United States issued a warrant to detain the tanker for purportedly making illegal oil shipments to Syria. Gibraltar authorities have, however, rebuffed the US request. On Friday, the US Treasury Department also imposed sanctions on the tanker and the captain for supposedly transporting over two million barrels of oil that will benefit Iran's security forces.

The developments come amid increasingly escalating tensions between Washington and Tehran that have been at loggerheads since May 2018, when the US unilaterally pulled out from the 2015 nuclear deal with Iran and reinstated all sanctions against the Mideast country.