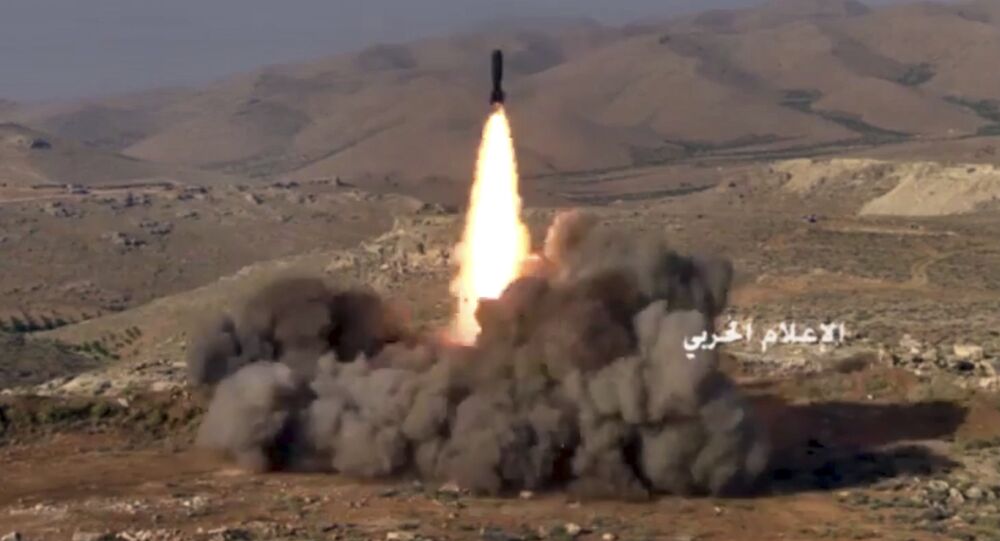 Already tense relations between Israel and Lebanon got worse this week after a series of drone-related incidents, including a suspected Israeli attack on a Hezbollah press office in Beirut.

“Senior Iranian commanders” and a senior associate from the Hezbollah movement have been engaged in an effort to create a secret precision guard missile program in Lebanon, the Israel Defence Forces have announced, citing intelligence data.

In a press conference on Thursday, IDF spokesman Lt. Col. Jonathan Conricus alleged that three Iranian officers from the Revolutionary Guards’ Quds Force, including one Brig. Gen. Muhammad Hussein-Zada Hejazi, one Col. Majid Nuab and one Brig. Gen. Ali Asrar Nuruzi, were involved in the secret project. According to the IDF, these Iranian officers were based “inside Lebanon, leading Hezbollah’s precision guided missile project in order to attack Israel.”

These 3 Iranian commanders are working on a secret¹ project with Hezbollah to manufacture precision guided missiles to attack Israel.

—
¹not so secret anymore. pic.twitter.com/ZLFsOr9yLz

The three alleged Iranians are said to be under the command of Gen. Qassem Suleimani, the Revolutionary Guards Quds Force Commander believed to have engaged heavily in providing Iranian support to Syria and Iraq in their fight against the Daesh (ISIS)* terrorists in recent years.

Fuad Shukr, an advisor to Hezbollah leader Hassan Nasrallah, is said to be the key Hezbollah commander involved in the missile project.

The IDF alleges that Iran had tried to transfer precision guided missiles to Hezbollah through Syria in 2013 and 2014, but was largely stopped by Israeli air strikes. Since 2016, the IDF says, Hezbollah and Iran have moved forward with another effort - converting Hezbollah’s existing and substantial stocks of rockets into precision-guided missiles.

Conricus did not address whether the above-mentioned individuals should fear for their security, saying only that if he were “any of these terrorists, I probably wouldn’t be too happy to be named and shamed.”

In a video posted alongside Conricus’ presentation on the IDF's Twitter account, the military warned that “if terror groups get access to precision guided missiles, they’ll be able to remotely attack any target of their choice.” The Israeli military wouldn’t “let Hezbollah get their hands on these weapons” under any circumstances, the video warned.

Iranian officials and representatives of Hezbollah have yet to comment on the IDF’s allegations. According to Conricus, Israel was releasing this information now in a bid to force Beirut and the international community to act.

“Iran is endangering Lebanese [security] by trying to produce precision-guided missiles on Lebanese soil, using the Lebanese people as human shields,” the IDF spokesman said. “In our point of view, the Lebanese government is completely responsible for what is happening on Lebanese soil,” he stressed. Conricus also noted that Israel considers Hezbollah as its “main enemy,” while the Lebanese military is its “potential enemy.”

According to the IDF, in spite of Iranian support, Hezbollah has not yet gained the industrial-grade capability to produce high-precision missiles.

Earlier this week, Hezbollah threatened to retaliate to the series of confirmed Israeli airstrikes near Damascus, and to the alleged Israeli drone attacks on Hezbollah’s headquarters in Beirut on Saturday night. Israel justified the Syria attack citing the alleged threat of a “pending large-scale attack” by Iranian forces on targets inside Israel. The IDF has yet to confirm whether the two drones that went down in Saturday night’s operation in Beirut belonged to Israel. Lebanon called the drone operations an “attack” on the country’s sovereignty.

In the wake of the drone attacks, Israeli Prime Minister Benjamin Netanyahu warned that Hezbollah’s leaders, and officials from both Iran and Lebanon, should be “careful of what they say,” stressing that Israel had the ability “to defend itself and to pay back its enemies.” The statement followed a warning  by the Iranian government that Tel Aviv would face “grave consequences” if it continued its suspected wave of attacks across Syria, Lebanon and Iraq.

Israel and Hezbollah last clashed in Lebanon in 2006, with Israeli troops invading the Mediterranean country after the militant group kidnapped two Israeli soldiers in a cross-border raid. The conflict claimed the lives of over 1,300 people, and caused billions of dollars in damage to Lebanon’s infrastructure. The war was halted by a UN-brokered ceasefire.

Israel has repeatedly accused Iran of sponsoring anti-Israeli proxy campaigns in the region, including in Lebanon and Syria, and has carried out hundreds of strikes in Syria in recent years. Relations between the two countries have been poor for decades, and Tehran and Tel Aviv have repeatedly threatened one another with destruction in the event of war.