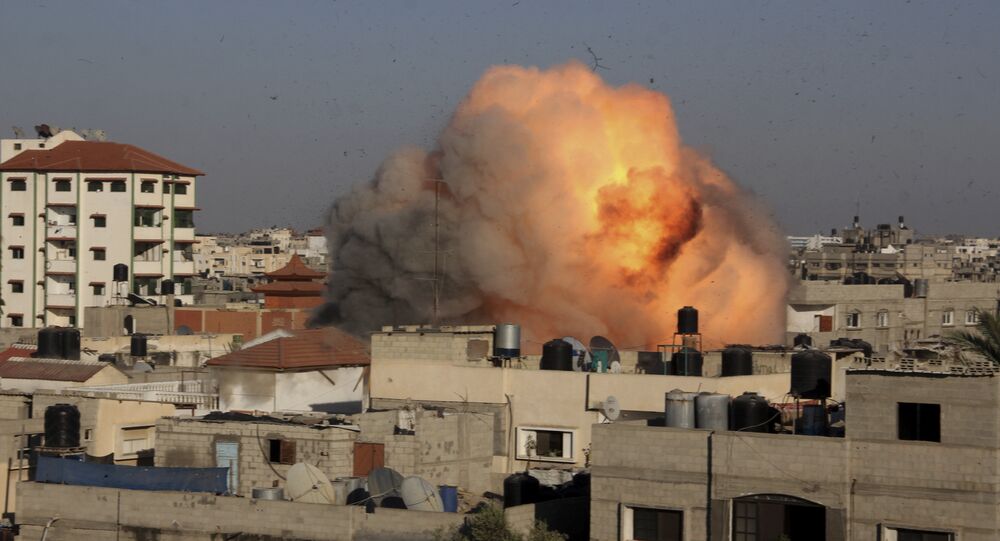 According to several conflicting reports, the explosions could have been caused by drone attacks or by an accident.

At least two security personnel were killed on Tuesday as a result of an explosion that occurred near a police checkpoint at Eldadhuah Junction in southern Gaza City, according to media reports.

Multiple reports appeared earlier in the day on social media alleging an Israeli strike targeting the Gaza strip. According to local netizens, citing eyewitnesses, at least two Palestinians were killed and one was injured in an explosion that destroyed a motorcycle in the enclave.

#BreakingNews
Two Palestinians were killed and 3 others were wounded in an explosion in the Gaza Strip, according the Ministry of Health. pic.twitter.com/L4gJib1EgF

The Palestinian health ministry has reportedly confirmed that two Palestinians were killed and another injured in an explosion in Gaza City on Tuesday night. The cause of the blast reportedly remains unknown. Gaza security forces have launched an investigation into the incident.

A spokesperson for the Gaza Health Ministry said that a drone attacked a motorcycle on which the two victims were riding.

According to the News Israel 13 broadcaster, the IDF has denied involvement in the incident. An IDF spokesperson reportedly suggested that the cause of the explosion was a "work accident". "The army is not aware of any airstrikes in Gaza tonight", a press officer of the Israeli army said.

The Israeli military earlier targeted the Palestinian Hamas movement in the Gaza Strip in response to shelling from within the enclave, according to the Israel Defence Forces (IDF).

Hours later, two explosions reportedly occurred in the enclave allegedly targeting local police forces. According to local media, citing a spokesperson for the Ministry of Interior, the second blast targeted a police checkpoint in western Gaza. Several people were reportedly injured in the second explosion.

Local netizens have suggested that the explosions could be caused by an internal conflict.

Local media is retracting news about a third explosion central #Gaza saying it didn't happen & they misreported it. I don't understand what's happening.

Meanwhile, the Quds News Network media outlet reported, citing sources, that there was no third explosion in the Gaza Strip.

The Gaza Strip Interior Ministry declared at midnight an emergency situation in all the security structures in the enclave, Iyad al-Bozo, the ministry's spokesman in Gaza, told reporters.

"Another explosion at a police checkpoint on a coastal road in Gaza City, which injured several people. The interior ministry has declared an emergency situation in all security structures in the Gaza Strip", he said.

In 2007, a deadly conflict between Fatah, then dominating party in the Palestine Authority, and the Hamas Islamist movement resulted in the split of the Palestinian Authority and Hamas taking over the Gaza Strip. The West Bank is still reportedly controlled by Fatah.

Israel traditionally blames Hamas, which rules the Gaza Strip, for any aggressive actions from the territory of the enclave, demanding that the Islamist movement ensures observance of the ceasefire by all Palestinian factions.

For decades, Israel has been in conflict with the Palestinians who have been seeking diplomatic recognition for their independent state on the territories of the West Bank, including East Jerusalem, which is partially occupied by Israel, and the Gaza Strip. Clashes and frequent shelling occurs from both sides.