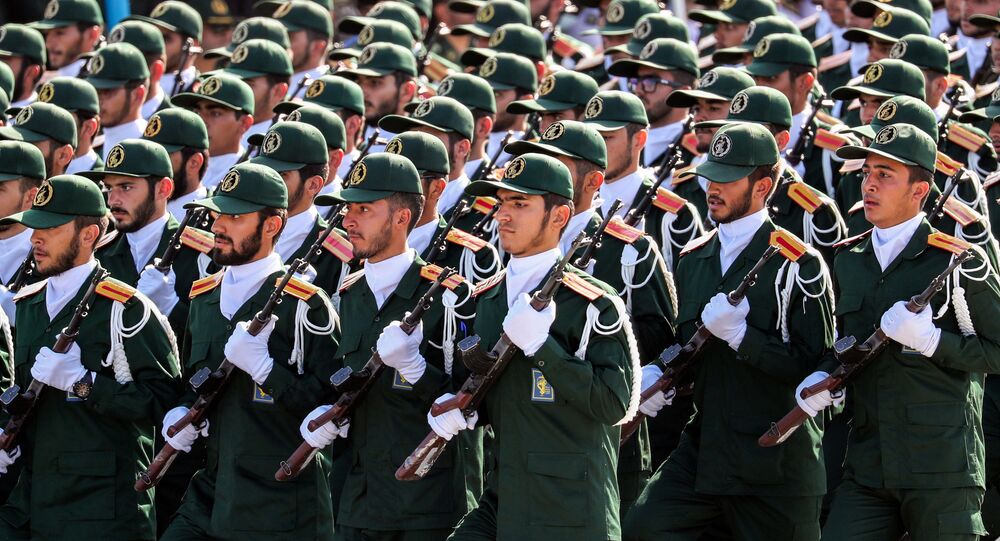 The IRGC warning comes amid reports suggesting that Israel has agreed to provide intelligence assistance to a US-proposed maritime coalition to patrol the Persian Gulf against a purported Iranian threat in the wake of "sabotage attacks" on oil tankers in the region.

Islamic Revolutionary Guard Corps (IRGC) Navy Commander Rear Admiral Alireza Tangsiri has warned that any illegitimate Israeli presence in the Persian Gulf could spark a confrontation in the region, and that the responsibility for the consequences lies with the United States and the UK.

Tangsiri, who was among multiple Iranian officials sanctioned by the US on 24 June, is also said to have claimed that "whenever our commanders wish so, they are able to detain any ship, even if it is accompanied by American and British forces".

"By establishing an illegal coalition in the region, the US and the UK are trying to implement their own scenarios. The security of the Persian Gulf is among Iran's priorities, and we believe Iran's shipping lanes must remain international", he said.

The IRGC commander continued by emphasising that the elite unite's Navy was responsible for ensuring the security of the Strait of Hormuz and the Persian Gulf, and did not need the presence of foreigners there.

"Iran is the flag-bearer of security in the Persian Gulf, but that hinges on the export of our oil and the country's ability to use the region. We'll ensure the security of the Persian Gulf as long as our own security is ensured".

His stark warnings followed reports about Israel agreeing to take part in a US-led international naval coalition in the Persian Gulf, which Washington claims is aimed at securing navigation routes for vessels in the wake of a series of oil tanker incidents there.

According to Ynet News, Israeli Foreign Minister Israel Katz told a closed session of the Knesset Foreign Affairs & Defence Committee last week that Tel Aviv would provide assistance in intelligence and other "unspecified fields" to the US-led mission, known as Operation Sentinel.

Israel's potential participation has already caused a stir among top Iranian officials. On 9 August, Iranian Foreign Ministry spokesman Abbas Mousavi described any Israeli involvement in any maritime coalition in the Gulf as a "clear threat" to the national security of the Islamic Republic.

"Within the framework of the country's deterrence and defensive policy, the Islamic Republic of Iran reserves the right to counter this threat and defend its territory", he cautioned.

His comment was made shortly after Iranian Defence Minister Brig. Gen. Amir Hatami argued that Operation Sentinel would fuel instability in the already turbulent region, while Israel's "highly provocative" engagement could lead to "disastrous consequences for the region".

IRGC Commander-in-Chief Maj. Gen. Hossein Salami has, meanwhile, fired off a clear-cut warning that Israel's very existence would be threatened with "irreversible collapse" if the United States and its regional allies and partners choose to start a new war with Tehran.

Salami blasted the "coalition of demons", meaning the US-led initiative, and argued that Iran was already in the middle of a war with the great powers of the West subjecting Tehran to "maximum political and economic pressure, psychological operations, cultual operations, economic seizures, and even security threats and military intimidation".

The United States and its regional allies have accused Iran of orchestrating a round of attacks on oil tankers in the Persian Gulf — an allegation that Tehran has strongly denied, urging Washington to stop the "blame game", "warmongering" and "false flag operations".

The detention came a few weeks after Gibraltar's authorities, assisted by UK Royal Marines, seized an Iranian supertanker over professed crude oil delivery to Syria in violation of EU sanctions on the government of President Bashar al-Assad — a claim Iran has denied. Tehran has, however, pointed out that its decision to detain the UK vessel was not made in retaliation for the earlier incident.

As tensions were running high, Washington moved to invite a number of countries to join a coalition to police the Persian Gulf against an alleged Iranian threat. While some nations, including Germany and France, remain reluctant to sign up for a maritime mission out of concern they might be dragged into another war in the Middle East, the UK has agreed to pitch in and even announced that it would put together its own, European-led, coalition for the same purpose.