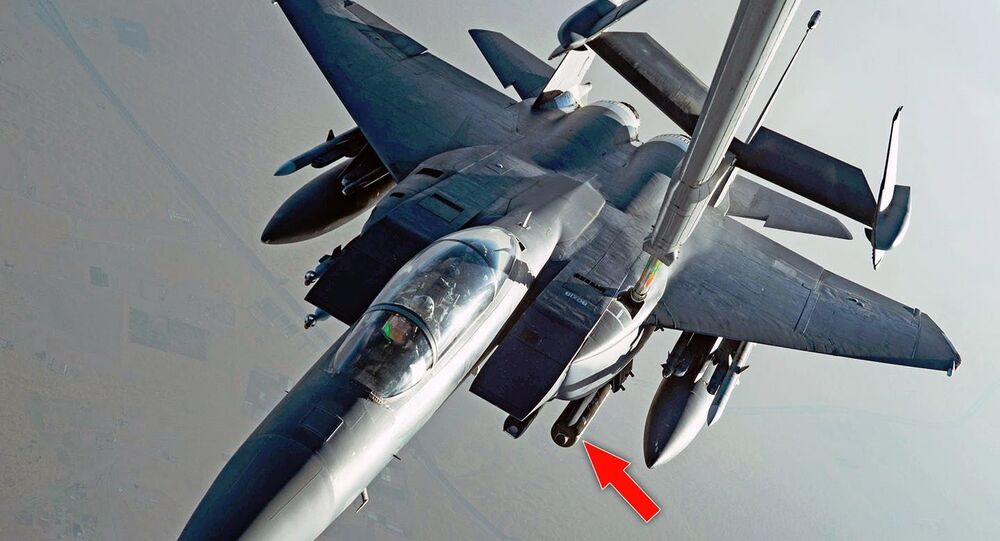 The development comes against the backdrop of US-led efforts to build an international coalition that will patrol the Strait of Hormuz as tensions with Iran continue to drastically escalate.

Based out of Al Dhafra Air Base, the UAE, and attached to the 336th Expeditionary Fighter Squadron, the jets are reportedly fitted with clusted bombs.

"Their [the F-15Es'] role is to conduct combat air patrol missions over the Arabian Gulf and provide aerial escorts of naval vessels as they traverse the Strait of Hormuz. The F-15E is a dual-role fighter designed to perform air-to-air and air-to-ground missions and is currently conducting Surface Combat Air Patrol (SuCAP) operations to ensure free and open maritime commerce in the region".

According to The Drive, some of the aircraft were fitted with Wind Corrected Munition Dispensers (WCMD), a GPS-assisted intertial navigation system guided canister that can carry a variety of cluster munitions. Beyond cluster bombs, the F-15Es are said to carry a pair of AIM 120C Advanced Medium-Range Air-to-Air Missiles (AMRAAM) and two AIM 9-X Sidewinder short-range infrared homing missiles.

Already existing tensions in the region were further exacerbated in early July when the Iran seized a UK-flagged oil tanker in the Strait of Hormuz weeks after a UK seizure of an Iranian vessel off the coast of Gibraltar.

Following the incident, the United States announced that it was seeking to establish a maritime force, dubbed Operation Sentinel, in order to strengthen security in the Persian Gulf, the Strait of Hormuz, the Bab el-Mandeb Strait, and the Gulf of Oman in the wake of recent "sabotage attacks" on oil tankers there. Washington blamed the alleged attacks on Iran, which, in turn, denied the claims and accused the US and its regional allies of "warmongering" and "false flag ops".

In line with the American strategy of "maxium pressure" against Iran, US Secretary of State Mike Pompeo invited Germany, France and the UK into the new international coalition, along with Japan, Australia, Norway, South Korea and other countries. While Berlin refused to take part in it, London announced its own plans to "put together a European-led maritime protection mission" in response to the seizure of the UK-flagged vessel.

Relations between Iran and the United States have been in a downward spiral since May 2018, when President Donald Trump decided to unilaterally withdraw from the Obama-era nuclear deal with Tehran and reinstate all sanctions against the Islamic Republic, while threatening to impose secondary sanctions on other countries doing business with Iran.

On the one-year anniversary of Trump's pullout from the deal, Iran informed the remaining parties to the treaty - France, the UK, Germany, Russia, China, and the EU - that it would suspend some of its voluntary commitments, and gave them 60 days to ensure Tehran's interests under the agreement.

In June 2019, the already simmering tensions nearly evolved into a direct confrontation when Iran announced that it had shot down an unmanned US spy drone after it violated its airspace. The United States insisted that the drone was flying over international waters, while Trump ordered - and abrupty called off - an airstrike on three Iranian sites just 10 minutes before it was supposed to be carried out.