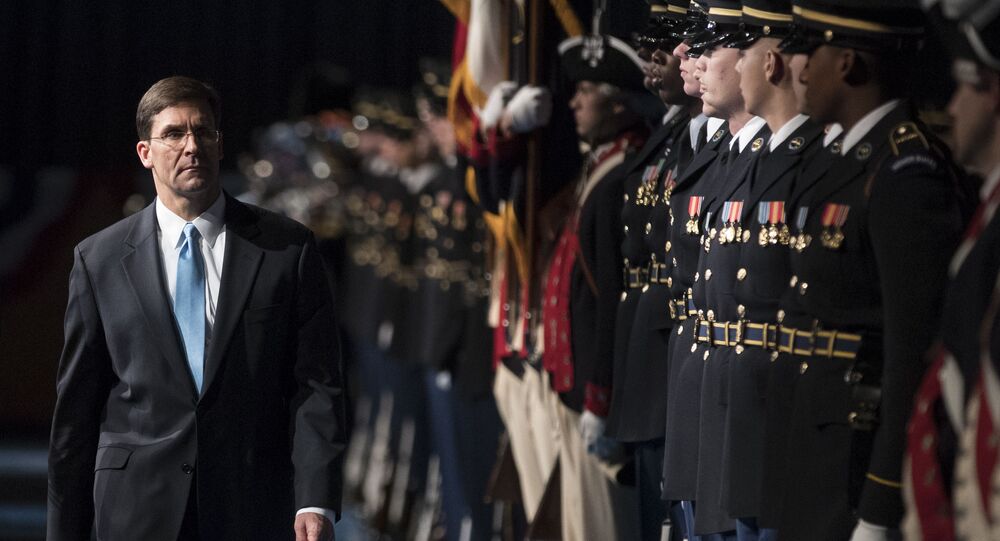 Mark Esper received the US key defence post amid escalating tensions with Iran, marked by American troop reinforcement in the region, threats to Tehran and incidents involving commercial ships in the Strait of Hormuz. Just several hours after starting his new job, he promised a firm response to any attacks on freedom of navigation there.

Newly-appointed Defence Secretary Mark Esper has pledged to keep warships and air power in the Persian Gulf to protect commercial vessels passing through one of the world’s key routes for oil shipping, the Strait of Hormuz, controlled by Iran. Esper, confirmed by the Senate on Tuesday, stated that the Pentagon would deter the Islamic Republic’s “provocations” and prevent interference in the freedom of navigation there, if necessary.

“We will escort our ships to the degree that the risk demands it. And I assume that other countries will escort their ships”, he said just three hours into his new job, The Washington Examiner reports.

Although he admitted that maritime and air forces are not expected to flank or follow commercial ships, crossing the Strait of Hormuz, he pointed out they would be available to American vessels and control the situation in order to intervene if deemed necessary.

“I use ‘escort’ broadly, right. Escort doesn't mean they're following right behind, but as long as you're in the area that you can react quick enough to deter the provocation, that's the key”, Esper noted.

He also backed plans by several European countries to launch a joint maritime mission in the Strait of Hormuz to boost the security of commercial navigation there.

“I think it's all helpful. It's all sending the same message we're trying to send. That is freedom of navigation and no provocative acts in the strait”, Esper said as cited by the outlet.

London approached other European capitals with the aforementioned idea after the seizure of a British oil tanker by Iran. The UK garnered the support of several EU member states, including France, Italy, and Denmark, in contrast to distancing themselves from similar US plans, voiced at a NATO defence ministers meeting in late June.

The tensions around freedom of navigation escalated last Friday when the Iranian Islamic Revolutionary Guard Corps captured the UK oil tanker Stena Impero over what it described as a breach of international maritime regulations. France along with the United Kingdom, Germany and some other countries has condemned the tanker’s seizure.

Iran's Speaker of Parliament Ali Larijani made it clear that the tanker’s seizure was in retaliation for the detention of the Iranian oil supertanker Grace 1 in the Straits of Gibraltar by the British military earlier this month over allegations it breached the EU sanctions against Syria.