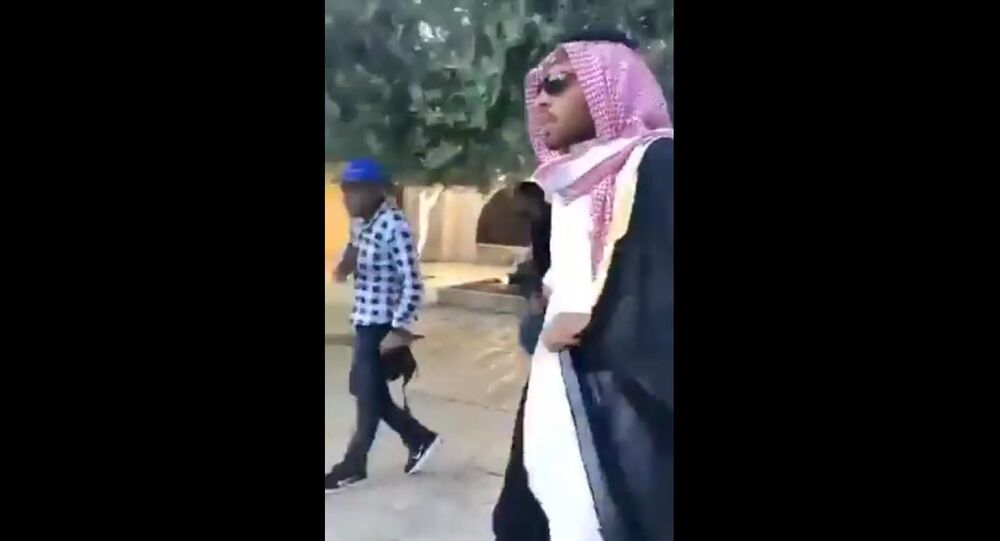 The blogger is part of a small Arab delegation visiting Israel at the invitation of the Foreign Ministry, and is expected to meet with Prime Minister Benjamin Netanyahu.

Mohammed Saud, a Saudi student and social media personality, was accosted by angry locals when he visited Jerusalem as part of a mission to improve diplomatic ties.

Videos circulated on Twitter show Palestinians attack Saud as he is walking toward the Al-Aqsa Mosque on the Temple Mount.

Palestinians protesting his visit called him a “traitor”, “animal” and “Zionist trash”, and also told him to pray at a synagogue instead of a mosque, according to Israeli media.

This is how Palestinians welcomed a pro-Israel Saudi blogger that came to pray at Al Aqua mosque.

They have no respect to their holy site and to fellow Muslims. Show this to the world! pic.twitter.com/jfazWGuksF

Footage shows a boy spitting on Saud several times, while other people can be seen hurling chairs at the blogger as he is walking through the streets of the Old City.​

Palestinians attacked Saudi journalist @mohsaud08 and kicked him out of Al-Aqsa Mosque, calling him "trash, traitor Zionist". Mohammad is a part of Arab journalists delegation visiting Israel this week. pic.twitter.com/abojmM6c6x

A spokesman for Israel’s Foreign Ministry has condemned the Palestinians’ reaction, tweeting: “We strongly condemn the cruel and immoral behaviour of some Palestinians near the Al-Aqsa Mosque toward a Saudi media personality who came to Jerusalem to be a bridge to peace and understanding between peoples.”

Saud arrived as part of a delegation of six journalists and bloggers from Arab countries that don’t have official diplomatic ties with Israel, such as Saudi Arabia and Iraq.

His Twitter timeline is filled with messages of support for Israel and its prime minister, Benjamin Netanyahu, while his username is written in both Arabic and Hebrew. In one video, he admits he loves Israel and wants diplomatic relations between Saudi Arabia and the Jewish State.

The delegation was brought to Israel by the Foreign Ministry, which is seeking to boost contacts with the Arab world, and is set to visit the Yad Vashem Holocaust memorial and meet with lawmakers, diplomats and academics.

Prior to their arrival, the Palestinian Journalists Syndicate condemned the visit as “part of a political effort in the context of Zionist-American schemes to liquidate the Palestinian cause” and called on Arab media groups to blacklist the yet-unknown members of the delegation.

Saud defied the objections and became the only delegate to go public. He went as far as to pose for a photo in the Knesset on Monday alongside Avi Dichter, the head of the Foreign Affairs and Defence Committee.

Saud is also expected to meet with Netanyahu on Tuesday.

Despite the fact that Saudi Arabia and Israel do not have official diplomatic relations and that the Israeli-Palestinian conflict is far from being resolved, the two states are developing informal cooperation and seal major deals off the public record. Netanyahu has acknowledged the existence of "secret" relations with some Arab nations in the past and is thought to be interested in formalising ties with Saudi Arabia in the near future.