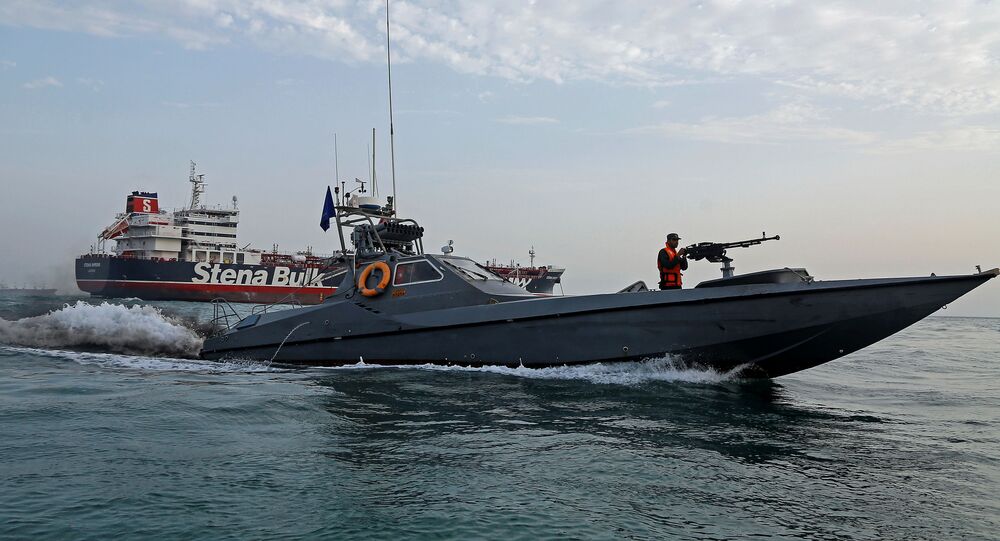 On Monday, amid reports that the UK would be scaling up its presence in the Gulf with a nuclear sub and Royal Marines following Iran’s seizure of a British-flagged tanker, Foreign Secretary Jeremy Hunt confirmed that London was looking to put together a “European-led maritime protection mission” to ensure “safe passage” through the body of water.

“To all the countries that are calling on Iran to release the tanker, we ask them to tell Britain the same thing,” Rabiei said, recalling the July 4 incident in which UK Royal Marines boarded a Panamanian-flagged tanker laden with Iranian oil.

“When you illegally seize the ship in Gibraltar, we too are not bound to tolerate any more,” the spokesman added.

At the same time, Rabiei stressed that Iran’s detention of the UK-flagged Stena Impero was not an act of ‘retaliation’ for the July 4 incident.

“Comparing the two seizures is an unfair reading” of the situation, he said. “Seizing the British tanker was a legal measure by Iran. Iran confronted the ship (to ensure) the region’s security.”

© AFP 2020 / ABED GHASEMI
In this handout picture provided by Fars news, an Iranian official talks to crew members inside the seized UK-flagged tanker Stena Impero off the coasts of Bandar Abbas in southern Iran, on July 21, 2019

Earlier, Iranian officials and media alleged that the Stena Impero was detained after turning off its positioning equipment, ignoring the distress calls of an Iranian fishing boat, and colliding with the boat while disregarding repeated Iranian warnings about its unsafe behaviour during its passage through the Strait of Hormuz.

On Monday, UK Foreign Secretary Jeremy Hunt announced that London was seeking to put together a European-led “maritime protection mission,” not affiliated in anyway with US efforts to choke off the Iranian economy, amid what he said was “an act of state piracy” by Iran to seize the British tanker.

Earlier in the day, sources told British media that London would be deploying a nuclear-powered missile submarine to the Persian Gulf to monitor communications between Iranian servicemen and report them back to headquarters in London. The sub will be joined by a complement of Royal Marines, and will add to the British destroyer and frigate deployed to the area earlier to escort British commercial vessels through the Gulf.

Hunt’s remarks came just hours after Undersecretary of State for Defence Tobias Ellwood complained that the tanker incident was a sign that the Royal Navy was “too small to manage our interests across the globe.”

Earlier Monday, Iranian media released footage of the crew members of the detained British ship, showing them continuing their work aboard the ship and apparently remaining in good spirits.