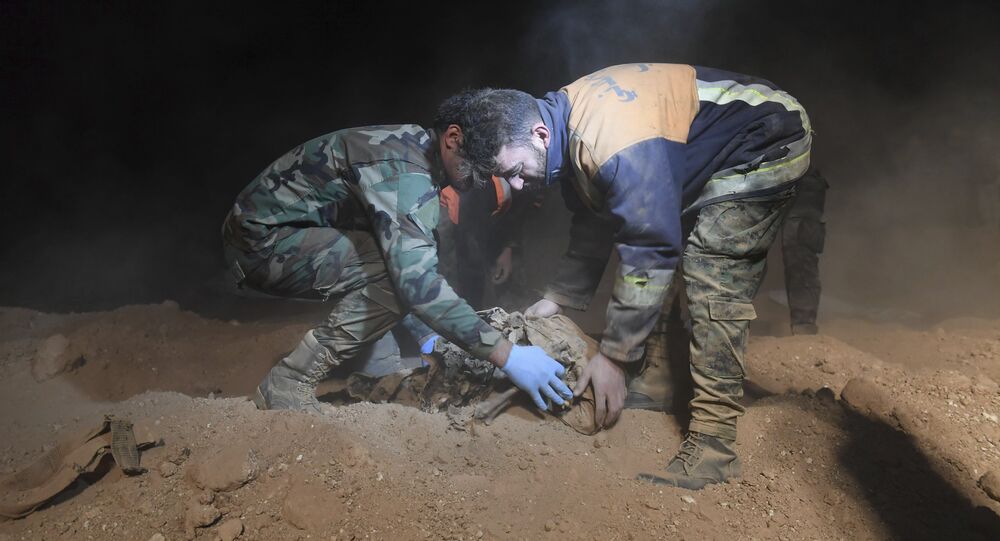 First responders in a field near the Syrian city of Raqqa have dug up 313 bodies from a large mass grave found last month.

According to reports, the grave contains the bodies of men, women and children that died while Daesh had control over the Syrian city, located on the northeast bank of the Euphrates River, about 99 miles east of Aleppo.

In October 2017, during the final phase of the US-backed operation to liberate the city, Daesh forces killed 297 people, mostly women and children, who tried to flee the city. Their bodies were allegedly buried on the western outskirts of Raqqa, Sputnik reported.

Raqqa was liberated in mid-October 2017 when the Syrian Democratic Forces (SDF), backed by US aircraft, retook the city from terrorists. However, thousands of dead bodies still remain under the wreckage. The Civil Council of Raqqa has been working to unearth mass graves. According to Yasser al-Khamees, who leads a group of first responders, at least 4,760 bodies have been uncovered from mass graves since January 2018, Military.com reported.

Forensic scientist Asaad Mohammed told media outlets that 10 to 12 bodies were being exhumed daily from the most recently discovered mass grave, Military.com reported.

"We inspect the body, identify the sex, age, time of death, cause of death. We take samples from each body and give it a number, we document it on official papers and then save the information on a computer database along with samples taken from this area.”

In February, Syrian authorities uncovered a mass grave of 3,500 people outside Raqqa in a suburb of al-Fukheikha, the largest such site uncovered since Damascus established control over Syria.

"These mass graves hold the answers to the fate of people who had been executed by Daesh fighters, who died in coalition air strikes or who have been missing," Sara Kayyali of Human Rights Watch told AFP at the time, Sputnik reported."It is deplorable that the US-led Coalition continues to ignore its responsibility over carrying out meaningful investigations into the hundreds of civilian deaths it caused in Raqqa and elsewhere — even as it starts to withdraw from Syria," Lynn Maalouf, Amnesty International's Middle East research director, also said in a statement in January. "The Coalition is unashamedly ignoring the devastating legacy of its bombing campaign, adding insult to injury by making clear that it has no intention of offering survivors any form of remedy or compensation."

Irish Daesh Bride Wishes To Return Home: 'I Want To See A Caliphate, Not A Brutality Group'

US Man Pleads Guilty to Attempting to Join, Support Daesh