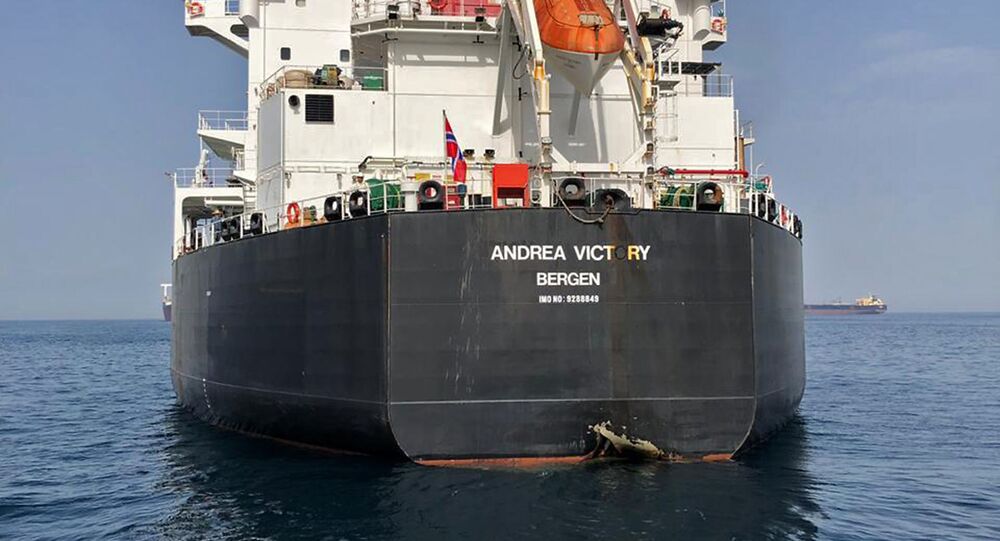 Four tankers in the Gulf of Oman, belonging to Norway, the UAE and Saudi Arabia, were left crippled as a result of several explosions that damaged their hulls in May 2019. While an investigation by the UAE has failed to determine the actor behind the "sabotage", the US has groundlessly accused Iran of it. Tehran has denied all the accusations.

Andrea Victory, a Norwegian tanker that suffered a significant blast on 12 May while sailing in the Gulf of Oman near a UAE port, is readying to dock at Iran’s Bandar Imam Khomeini port, almost two months after the attack, the research company Refinitiv Energy reported on its Twitter.

The tanker ANDREA VICTORY which was #attacked off #Fujairah in May has reloaded her cargo of Veg #oil that she brought from Argentina and is now waiting to berth at BIK,#Iran. The STS at Fuj was to re-take the cargo that was transferred to AQUADISIAC for storage while in DD #OOTT pic.twitter.com/ukYme7J884

According to Refinitiv, the tanker is completing its voyage, which was interrupted by the May incident, carrying a shipment of oil from Argentina to Iran. Following the blast, Andrea Victory reportedly unloaded its cargo onto another ship and was then moored at a dry dock for repairs needed to cover the hole in its hull. Recently, the tanker reclaimed its cargo and is now heading towards its destination, according to Refinitiv Energy.

An official investigation by the UAE into the "sabotage" on 12 May concluded that such a sophisticated operation could only have been carried out by a "state actor", but stopped short of pointing the finger at a specific country. However, the US has accused Iran of carrying out the attacks, albeit without providing any concrete evidence to substantiate the claims. Iran has denied being responsible for the incident.

A similar attack took place about a month later, in June, when two more tankers suffered crippling blasts that damaged their hulls, but didn't sink them. Washington once again accused Iran, presenting a video purportedly showing Iranian speedboat crew removing unexploded mines from the hull of a ship as a proof.

Tehran has denied the US accusations and slammed attempts to shift the blame for the incident onto the Islamic Republic. Iran has condemned alleged false-flag operations directed against it, warning that they lead to instability in the region.