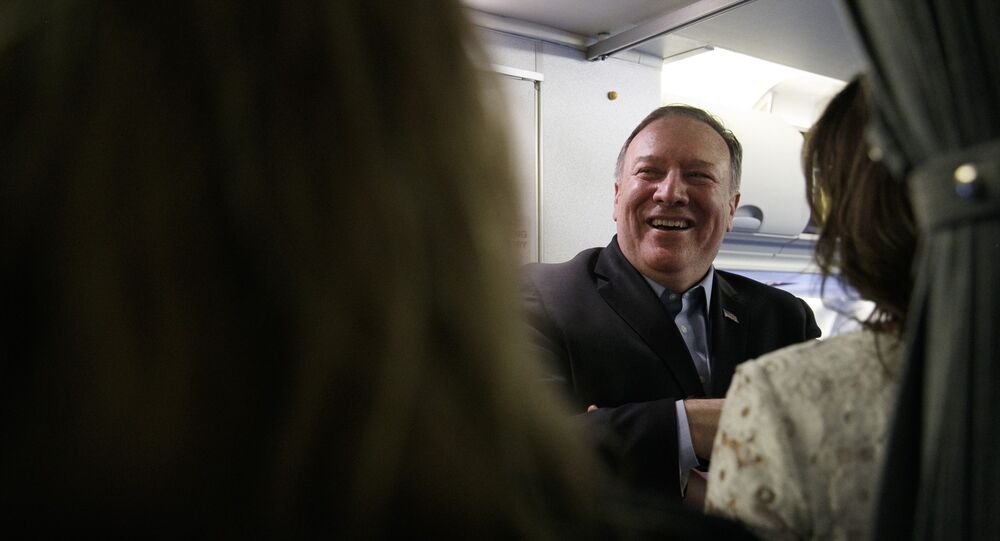 On Sunday, Iranian authorities announced that the country's enrichment of uranium would surpass 3.6 percent "in a few hours," and promised to reduce the nation's commitment to the Iran nuclear deal, officially known as the Joint Comprehensive Plan of Action (JCPOA), every 60 days, if the issue is not resolved.

US Secretary of State Mike Pompeo warned Iran of "further isolation and sanctions," following Tehran's move, claiming that an Iran "armed with nuclear weapons, would pose an even greater danger to the world".

Iran’s latest expansion of its nuclear program will lead to further isolation and sanctions. Nations should restore the longstanding standard of no enrichment for Iran’s nuclear program. Iran’s regime, armed with nuclear weapons, would pose an even greater danger to the world.

According to Tehran, reducing Iran's commitments under the nuclear accord is "in parallel with saving the JCPOA, and not destroying it, this tendency may lead to discontinuing our participation in the JCPOA".

On Wednesday, Iranian President Hassan Rouhani said that on 7 July Tehran will start enriching uranium at levels set out in the JCPOA and would maintain that enrichment at a level it considers necessary.

On 8 May 2018, the administration of US President Donald Trump fully withdrew from the historic 2015 JCPOA treaty and reimposed sanctions on Iran. A year after, Tehran announced that it would suspend some obligations under the agreement, giving the other nuclear deal signatories - France, Germany, the United Kingdom, Russia, China, and the European Union - 60 days to save the accord by facilitating oil exports and trade with Iran amid US sanctions.

Amid escalating tensions with Washington, Tehran has threatened to exceed the limit on uranium supply permitted under the pact. Earlier in the week, Iranian Foreign Minister Mohammad Javad Zarif confirmed that the country had surpassed the 300-kilogram (660-pound) low-enriched uranium stockpile limit, agreed on under the JCPOA.

At the same time, Iran warned that should the remaining JCPOA signatories fail to ensure Iran's protection by the end of the deadline, the country would resume the construction of its Arak Heavy Water Reactor Facility, which was suspended under the nuclear deal.

After the US withdrawal from the treaty, France, Germany and the United Kingdom created a joint mechanism to continue doing business with Iran, in spite of US sanctions. The three countries announced on January 31 that the mechanism, dubbed the Instrument in Support of Trade Exchanges (INSTEX), had been created.

During the first phase, the mechanism will ensure the delivery of medicines, medical equipment and agricultural products, but Tehran wants INSTEX to help the country export oil, one of the pillars of the Iranian economy, under US restrictions.

Russia has consistently advocated to maintain the JCPOA, and expand economic and financial cooperation with Iran, despite US sanctions. Russian Foreign Minister Sergey Lavrov Russia urged Iran on 2 July to show restraint and respect key provisions of the agreement. Lavrov also said that as of 2 July not a single transaction had yet been carried out with the help of the French-German-UK mechanism.

A spokeswoman for EU Foreign Affairs and Security Policy, Maja Kocijancic, said that the EU is worried about Iran's recent decision to raise uranium enrichment levels beyond JCPOA limits and is calling on Tehran to refrain from further steps that would go against the treaty. Kocijancic stressed that the European Union was waiting for further information from the International Atomic Energy Organisation (IAEA), following that regulatory body's findings on the increase of Iran's uranium enrichment.

The JCPOA, concluded on 14 July 2015, provides for the gradual lifting of the economic and financial sanctions imposed on Iran by the United Nations Security Council, the United States and the European Union in exchange for Tehran's guarantee that the country's nuclear program would remain peaceful.

Under the JCPOA, Iran agreed to an eight-year restriction on all uranium enrichment activities, as well as refraining on research and development in this area. In particular, Iran was obligated to start phasing out its IR-1 centrifuges, used to enrich uranium — a nuclear weapons component — over a ten-year period.