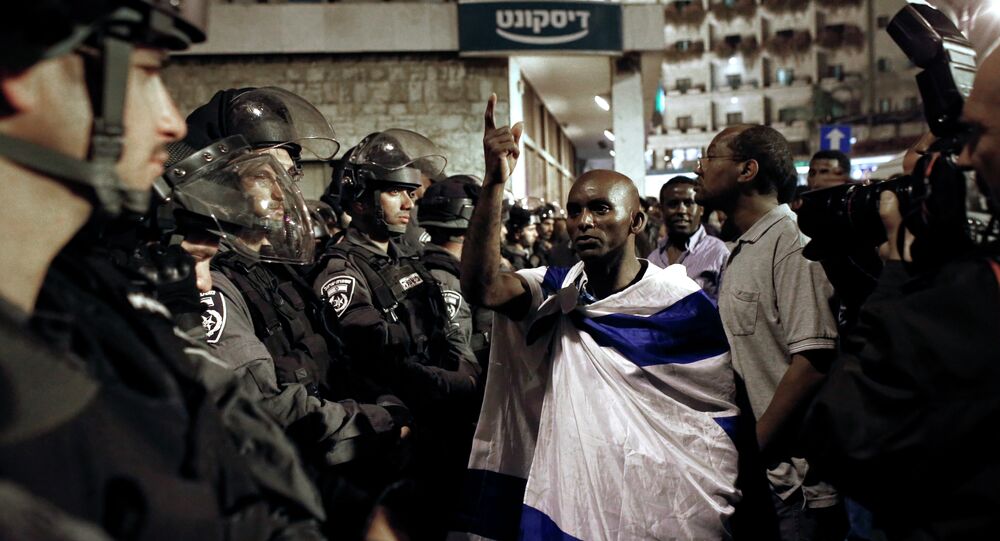 Over 45 Israeli Police Officers Injured in Clashes With Ethiopian Protesters

TEL AVIV (Sputnik) – More than 45 Israeli police officers have been injured in clashes with members of the Ethiopian community, who are blocking the country's main highways over the death of an Ethiopian boy, who was shot by a policeman, police said in a statement.

The mass protests on Tuesday resulted in heavy traffic jams across the country. The protesters also burned tires and threw stones at police officers, who responded with tear gas and stun grenades.

"The protests transformed into violent and uncontrolled riots … A total of 47 police officers have been injured, 60 protesters have been detained", the statement said on late Tuesday.

Protests by the Ethiopian community erupted in Israel after the death of Solomon Tekah, 19, who was shot dead by a police officer in the Kiryat Haim neighbourhood of Haifa on Sunday. The officer says he was attacked by Tekah while trying to stop a scuffle between several young people.

An eyewitness refutes the officer's remarks, saying that the latter was not in danger. The officer was arrested following the incident but soon released to house arrest, which sparked the subsequent protests.

Israeli Prime Minister Benjamin Netanyahu called on the Ethiopian protesters to respect the law and refrain from blocking highways. He also expressed condolences to the family of Tekah.

About 130,000 Ethiopians live in Israel, a country of some 8.7 million people. Members of Israel's Ethiopian community often complain of discrimination and excessive police violence.