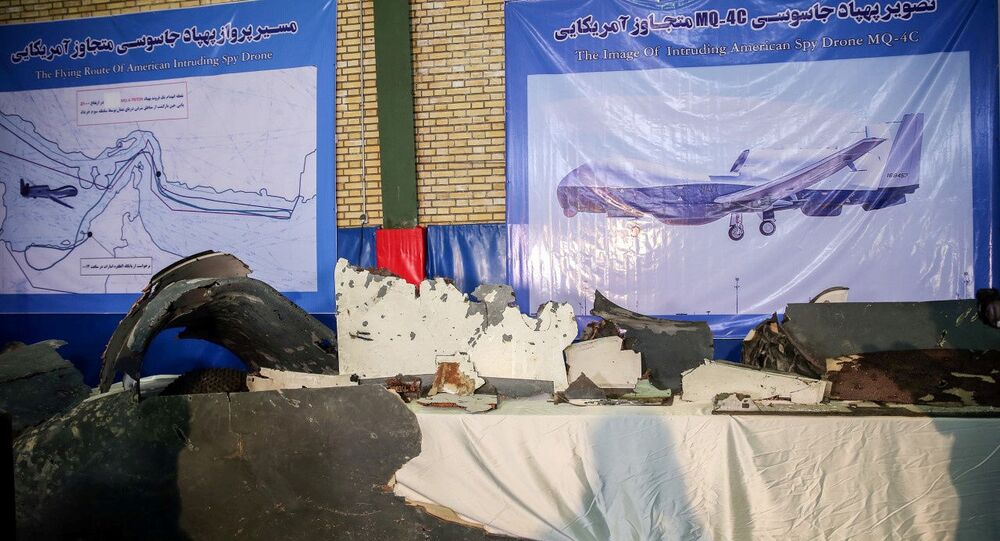 Iran downed a US drone on 20 June, insisting that it violated the country's airspace in the southern Hormozgan Province, despite US claims that it was flying above neutral waters of the Strait of Hormuz. The downing almost led to an American strike against Iran, which was abruptly stopped by the US Presidents minutes prior to start.

Tehran has summoned the UAE diplomatic representative to file a complaint against the launch of the American drone, which was downed on 20 June, from the UAE territory, Fars News reported. Iran insists that the downed drone, which allegedly took off from the al-Dhafra Air Base, violated its borders, but Washington denies it, claiming that it was flying in neutral airspace.

Abu Dhabi has yet to confirm the allegation that the US drone in question was launched from an air base on its territory.

The Iranian Foreign Ministry has stated that the country objects the provision of facilities for foreign military forces which are used to violate the borders of the Islamic Republic.

Earlier, Tehran voiced a complaint regarding the drone incident to Markus Leitner, the Swiss ambassador to Iran, who also represents the US interests in the country. Iran noted in talks with Leitner that it has indisputable evidence that the drone had violated the country's airspace and warned Washington against rash actions.

The US drone was downed on 20 June after it was repeatedly warned that it had violated Iran's border in the southern Hormozgan Province, Tehran insists. Iran also claims that a Boeing P-8 Poseidon spy plane violated its border as well, but opted not to shoot it down to avoid casualties, hoping that the destruction of the drone will be enough of a "warning" to the US.

Washington claims that its drone was flying above neutral waters of the Strait of Hormuz when it was downed. The US was later planning a retaliatory attack, which was aborted 10 minutes prior to its start by US President Donald Trump. He stated that the strike could claim the lives of around 150 Iranians, according to Pentagon estimates, and he decided it was a disproportionate response to a downed drone.

Tensions between the two countries began to deteriorate after the Trump administration in May 2018 pulled the US out of the Iran deal and slapped Tehran with crippling economic sanctions, primarily targeting its oil industry. Washington has also been increasing its military presence in the Middle East lately, citing an alleged threat emanating from the Islamic Republic.

Iran has repeatedly stated that it isn't seeking a war with Washington, but nonetheless vowed to counter any attempts to attack it from the US or any other country.