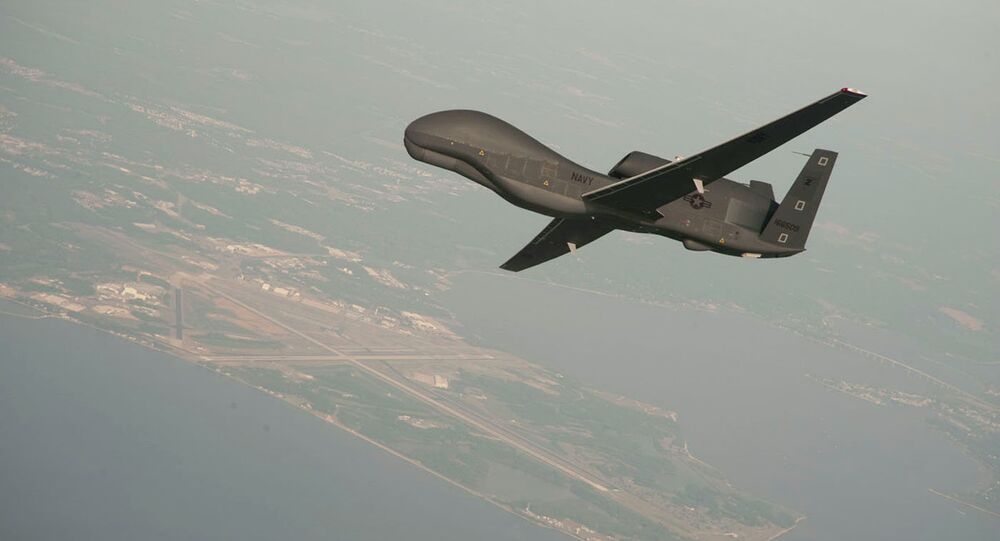 The US Defense Department has released an image of the flight path of the surveillance drone downed by Iran anti-air fire over the Gulf of Oman earlier Thursday.

The Pentagon's image of the RQ-4 Global Hawk's flight path purports to show the unmanned aerial vehicle was not over Iranian territory, but international waters, when it was shot down Thursday.

© AP Photo / Petr David Josek
US Drone Debris Retrieved in Iranian Waters – FM Zarif
Earlier Thursday, the Iranian government released a video also purporting to show the drone's flight path. The two seem to largely agree, up until the final moments prior to the shootdown. In the US photo, the drone retraced its easterly flight on a return trip, but in the Iranian version, the drone cuts much closer to the Iranian coast over the Gulf of Oman, during which time it would have been in Iranian territory. The US map shows territorial waters beginning not far from where the drone's flight path was, so if the Iranian version is correct, then the drone could likely have crossed that boundary.

© AFP 2020 / MASSOUD HOSSAINI
Pentagon Releases Video of What It Claims to Be US Drone Downing by Iran
US President Donald Trump has called the shootdown event a "very big mistake," but only said the public would "soon find out" whether or not a military response would follow.​​ In a meeting with top congressional leaders and US military and intelligence officials at the White House Thursday afternoon, lawmakers advised caution so as to not "bumble into war" with Iran, Sputnik reported.

The event only adds more tension to an already explosive situation, following the damaging of several tankers in two separate incidents in the Gulf of Oman in recent weeks. The US has pointed the finger firmly at Iran, accusing it or its "proxies" of sabotaging the ships with magnetic limpet mines, but Iran has denied responsibility for the explosions.

The US has deployed significant strike forces to the region in recent weeks, including a carrier battle group, a strategic bomber strike force, and thousands of US troops, claiming their presence is to deter planned attacks on US forces there by Tehran. Iran has denied such plans.