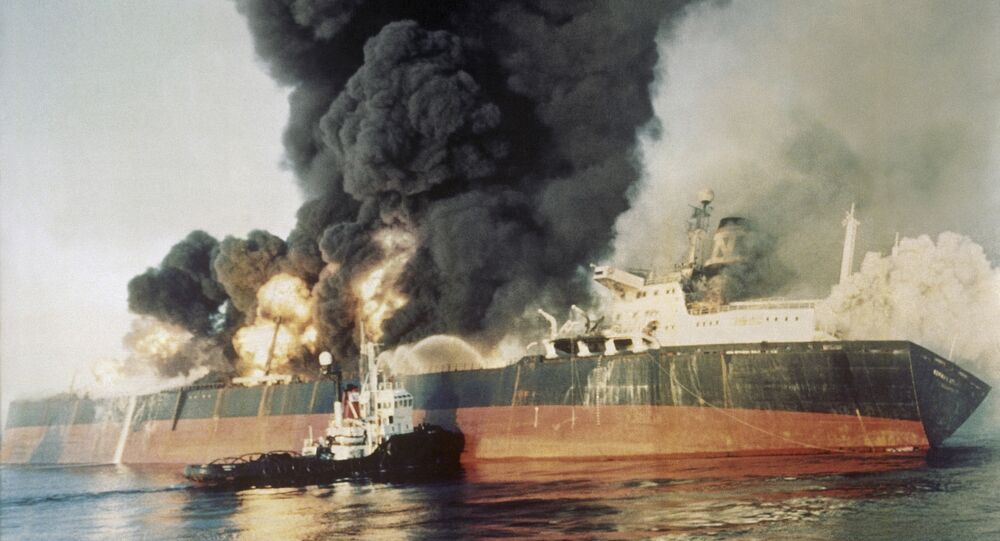 Secretary of State Pompeo has blamed Thursday's sabotage attacks against a pair of tankers in the Gulf of Oman on Tehran, with Iranian Foreign Minister Javad Zarif saying the word "suspicious" didn't even "begin to describe what…transpired." But the current tanker-related tensions aren't the first to hit the region in relatively recent history.

Thursday morning's attacks against two tankers carrying "Japan-related cargo" 14 nautical miles off Iran's coast, coming amid the second day of Prime Minister Shinzo Abe's conciliatory visit to Tehran, have ratcheted up fears over the security of precious cargo making its way through the narrow waterways connecting the vast energy wealth of the Middle East's energy powers to the rest of the world.

The Persian Gulf and the adjacent Gulf of Oman, linked by the Strait of Hormuz, sees  the equivalent of between 17-18 million of barrels of oil transported through its waters each day, with these supplies, destined mainly for Asia, accounting for 35 percent of the world's seaborne crude oil supplies.

Given these waters' strategic significance, any disturbance in the area, whether in the form of tensions between competing powers, accidents, or events such as Thursday's tanker sabotage, can have an immediate and drastic impact on the global economy. On Thursday, oil futures spiked over 4 percent over the news of the incident in the Gulf. "This is the kind of nightmare headline that you don't necessarily want to wake up to," Again Capital energy hedge fund manager John Kilduff told CNBC's Squawk Box this morning.

Amid the chaos, and the back-and-forth allegations about who is responsible, some observers have suggested that the fears over the acts of sabotage, when combined with reactions to the attacks against four tankers off the Emirati coast in mid-May, were reminiscent of the 1980s 'Tanker War' during the wider Iran-Iraq War of 1980-1988.

According to the US Naval Institute, during that war some 451 ships, 259 of them tankers, were subject to Iraqi and Iranian air and naval attacks, with ships from over three dozen nations targeted.

© AP Photo / Mark Duncan
Mines aboard the ship Iran Ajr are inspected by a boarding party from the USS LaSalle in the Persian Gulf, Sept. 1987. The USS Jarett waits in the background. The two American boats were among those escorting U.S.-flagged Kuwaiti oil tankers through the Gulf in the face of the continuing Iran-Iraq War.

Iran, Liberia, Panama and Cyprus-flagged ships were the most commonly attacked, although by 1987 the violence grew increasingly desperate and indiscriminate, with belligerents even attempting to strike ships belonging to the United States and the Soviet Union, the world's two superpowers.

Throughout the campaign, Iraq was responsible for about 59 percent of the attacks, with Iranian forces responsible for the remainder. Baghdad started the tanker conflict, with Saddam Hussein supposedly hoping that Tehran would respond to the sinking of its ships by trying to close the Strait of Hormuz to all maritime traffic and bring about US intervention. Iran did not bite, but did begin retaliating heavily by 1984.

© AP Photo / Fisk
The Saudi Arabian supertanker Al-Ahood moored in the Gulf on Sunday, May 27, 1984 its mangled super-structure burnt out after an Iraqi aircraft hit it earlier this month.

Attacks began to decline when warships from the US, the UK and the USSR started accompanying all vessels making their way through the Persian Gulf in 1987, and stopped completely after the war ended in 1988.

In total, some 340 ships were damaged, 259 of them tankers. 116 civilian sailors were killed in the violence, with 37 more reported wounded, according to US Naval Institute figures. Lloyd's of London has given a higher estimate of the losses, estimating that a total of 546 commercial vessels were damaged or sunk, and 430 civilian sailors killed.

The figures do not account for the July 3, 1988 US shoot down of an Iranian passenger plane with 290 civilians onboard, which took place after a US Navy ship on duty in the Gulf fired a missile at what it thought at the time to be an Iranian warplane.

© AP Photo / ERIC RISBERG
In this Dec. 16, 1987 file photo, the battleship USS Iowa fires its 16-inch guns during duty in the Persian Gulf.

The death and destruction caused during the 'Tanker War' was just a small portion of that caused by the wider Iran-Iraq War, which claimed the lives of an estimated half a million Iraqi and Iranian soldiers and tens of thousands of civilians, and caused over a trillion dollars in damage and economic losses. The war ended in a stalemate.

Despite the campaign of attacks against the commercial ships, some historians believe that the Tanker War did little overall damage to the Gulf's regional energy powers, with even less of an impact observed on global oil prices.

© AP Photo / Anonymous
View of the soot-covers Kuwaiti registered countainer ship Al-Manakh at the Dubai port on Feb. 19, 1985 where it will be repaired. The vessel was damaged in an Iran air attack in the gulf waters Monday.
...
Reddit
Google+
Blogger
Pinterest
StumbleUpon
Telegram
WhatsApp
28
Topic:
Attack on Tankers in Gulf of Oman (61)