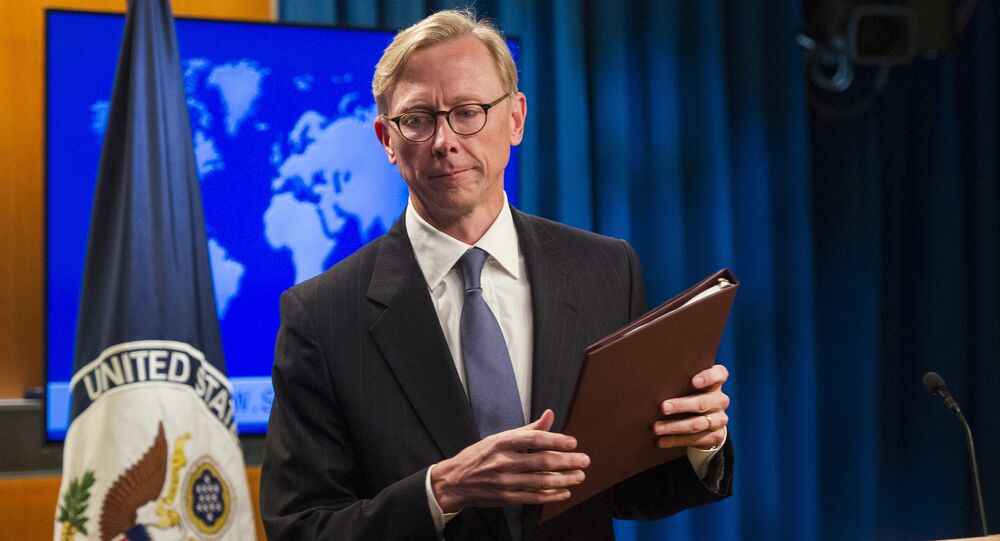 US Representative for Iran Claims Tehran 'Photoshops' its Achievements (VIDEO)

The official can't make up his mind whether Iran poses a growing threat, or its claims of power are just the result of Photoshop and deceitful camera work.

US Special Representative for Iran Brian Hook says Iranian authorities resort to lies and deception to create a "false impression of their activities and their true intentions." According to Hook, Iran seeks to "convince and deceive" people that "they are on the right side and that the US is the aggressor."

​The Special Representative turned to "ample historical precedents" to justify his point of view.

"Iran has photoshopped images of missile launches to try and show its increased missile capabilities. They've also photoshopped antiquated aircraft and tried to pass them off as new stealth fighter jets," he says on a video.

​The Special Representative appears to be referring to the 2008 New York Times report, which alleged an image of a missile fire test released by Iran's Sepah News contained an extra missile.

In February 2019, Iran conducted a test launch of ballistic missiles and released video of the trial. Deutsche Welle then reported that a 37-second video published by the Iranian government showed the launch from different angles, with the projectile finally hitting a target in the desert. In December, Iran conducted another missile test, according to Jane's Report.

US is confused. Is Iran a threat or not?! https://t.co/duXSL7sfJk

​In 2013, the Huffington Post reported that someone released an image of Iran's Qaher-313 perspective jet fighter seemingly photoshopped over Mount Damavand, Iran. The report explicitly noted that the image was not released by an official Iranian body and was unknown.

© CC BY 2.0 / Roman Boed / The US Treasury Department
US Imposes New Sanctions on Iran Amid Escalation
While Qaher-313 is still in development, it was officially presented in 2018, which hardly makes it "antiquated," especially considering that the US F-22 Raptor — widely considered a cutting-edge fighter — entered production in 1997 and the F-35 was first produced back in 2006.

The Special Representative is remarkably inconsistent in his estimation of the Iranian military. In 2018 Brian Hook warned that "the Iranian threat is growing" and that the World is "accumulating the risk of escalation." The discrepancy was not missed by some social media users either.

In another video, Hook said that Tehran faked its achievements in the fight against Daesh.

​"The Iranian regime and their militias tried to claim credit for the defeat of ISIS. Iraqi government forces and Syrian Democratic Forces with the support of the anti-ISIS Coalition were responsible for defeating ISIS," Hook says in the video, adding that the Iran-backed militias "came in later, with cameras, after operations were over and tried to take all the credit.

© REUTERS / Omar Sanadiki
US Special Envoy Denies Reports Alleging Deal With Russia to End War in Syria
The Special Representative failed to mention that Russian and Iranian military forces played a major role in defeating Daesh. Russia and Iran were the only two nations officially invited by Syrian President al-Assad. Before Russia came to Syria in 2015, Daesh controlled the majority of the Syrian territory. The anti-Daesh Coalition invaded Syria without the authorization of Damascus and conducted airstrikes for an entire year with little to no effect on the terror group. Iran maintained a major ground force presence in Syria- Iran also supported the Iraqi government and militias during their fight against Daesh in Iraq, according to The Guardian's 2014 report.

In 2018, the US Special Representative on Iran, Brian Hook made a video address in which speaking from the conserved Iranian Embassy in Washington DC, he openly called on the Iranian people to topple the government.

Trump Says US, France on Same Page With Regard to Iran