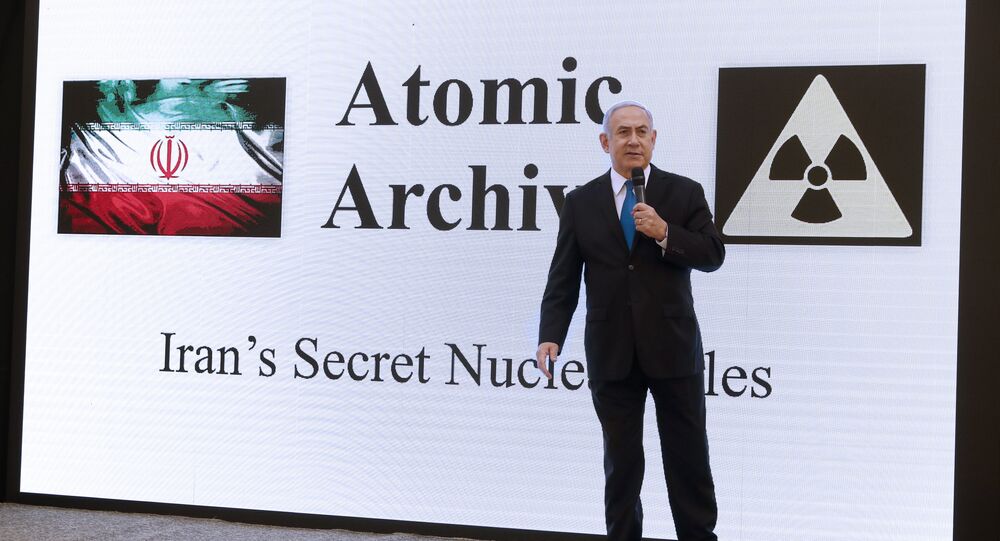 In April 2018, Israeli Prime Minister Benjamin Netanyahu held a press conference in which he claimed that Israeli intelligence had managed to infiltrate a secret Tehran archive and stole tens of thousands of documents revealing how Iran had lied to the world about its commitments to the nuclear deal.

Speaking at the Israeli Intelligence Heritage Centre in Tel Aviv on Wednesday, Vatikai explained that staffers went through literally dozens of versions of Netanyahu's speech in an effort "to achieve the largest impact" on policy and global public opinion.

Boasting that the 'Iran Lied' speech was arguably one of the most successful presentations of intelligence materials intended to affect policy in recent years, Vatikai noted that the staff had carefully constructed the speech. The Mossad had pushed to publicise less of the secret information, while staffers from the PM's office sought to create a 'simpler message' for the public to 'quickly understand and absorb'.

Days after Netanyahu's presentation, US President Donald Trump announced that the US would unilaterally withdraw from the Joint Comprehensive Plan of Action (JCPOA), the landmark 2015 Iran nuclear deal which offered Tehran sanctions relief in exchange for a commitment not to pursue nuclear weapons.

During his speech, Netanyahu claimed that Israeli commandos had managed to infiltrate a secret warehouse in Tehran to collect about half a tonne of secret files, including 55,000 pages of documents, which allegedly proved that Iran was continuing its secret pursuit of nuclear weapons in spite of its commitments under the JCPOA.

Iran vocally denied Netanyahu's claims. After the speech, Foreign Minister Mohammad Javad Zarif blasted the Israeli leader as "the boy who can't stop crying wolf" and suggested the presentation was a "coordinated" "rehash of old allegations" aimed at untying Trump's hands to pull out of the JCPOA. Zarif has also accused Mossad directly of using the 'Iran Lied' speech and other actions to try to "kill" the JCPOA.

Incredible series of coincidences. Or, a simple chronology of a MOSSAD program to kill the JCPOA? pic.twitter.com/Xg5e0C5DAA

© AP Photo / Iranian Presidency Office
'Ominous Conspiracy of Deal of the Century': Iran’s Rouhani Accuses US of Plotting Against Palestinian Authority
Last week, the International Atomic Energy Agency reaffirmed that its inspection activities had shown that Iran had complied with its obligations under the nuclear deal.

In May, on the one year anniversary of the US withdrawal from the JCPOA, Iran said it would withdraw from its voluntary commitments from the deal and resume uranium enrichment beyond the threshold for civilian use unless the JCPOA's other signatories found effective ways to get around the tough US sanctions on Tehran's oil and banking sectors.