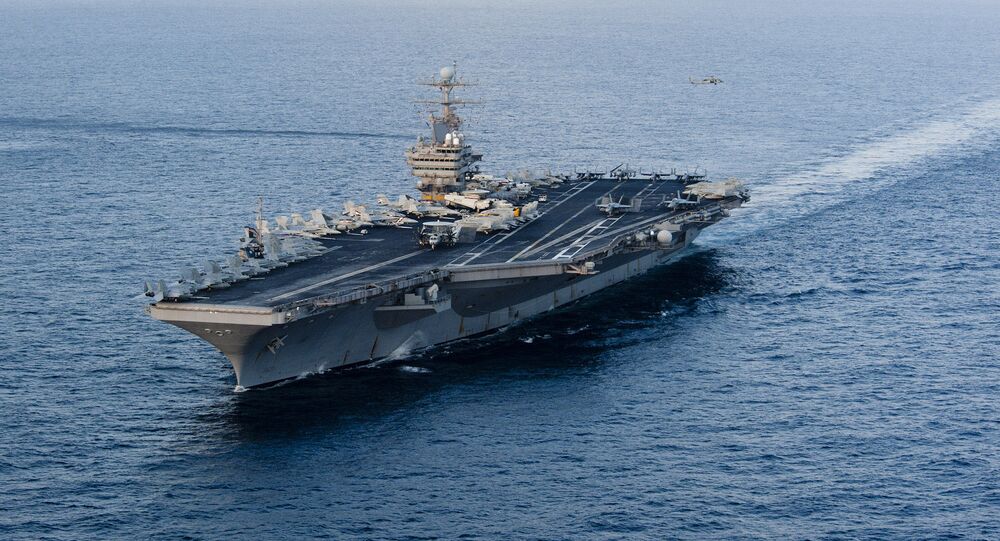 Earlier, US Fifth Fleet Commander Vice Admiral Jim Malloy said the Navy would not rule out sending the USS Abraham Lincoln carrier strike group through the Strait of Hormuz, the strategic narrow body of water separating the Persian Gulf from the Arabian Sea, if doing so was found to be necessary.

The US Nimitz-class supercarrier deployed to the Middle East amid escalating tensions between Washington and Tehran remains deployed outside the Persian Gulf amid apparent attempts to de-escalate the situation, the carrier's commanding officer has said.

"You don't want to inadvertently escalate something," Captain Putnam Browne said, speaking to the Associated Press on Monday during a visit by reporters to the carrier.

The USS Abraham Lincoln and its escorts, including three destroyers and a guided-missile cruiser, are presently stationed an estimated 200 miles (320 km) off the Coast of Oman in the Arabian Sea.

"They [Iran] do impose a threat to our operations, but also to the safety and security of commerce and trade going through the Strait of Hormuz and that's why we are here," commander Wade said.

Over the weekend, the US Air Force reported that planes and helicopters stationed aboard the USS Abraham Lincoln had carried out "simulated strike operations" in drills involving a nuclear-capable B-52 bomber off Iran's maritime borders in the Arabian Sea.

Senior US Navy officials previously declined to discuss why the carrier group had not been sent through the Strait of Hormuz and into the Persian Gulf, despite comments last month by Vice Admiral Malloy that he was not restricted or challenged from operating the ship "anywhere in the Middle East."

Iranian officials have blasted the US over the Gulf buildup, calling the superpower's military presence in the Mideast the "weakest in history," and warning that Iran was capable of using "new secret weapons" in its arsenal capable of sinking American ships in the event of US aggression.

Building tensions between the two countries have led to concerns over the security over seaborne energy deliveries, with an estimated one third of the world's oil supplies passing through the Strait of Hormuz every day.

Also Sunday, Secretary of State Mike Pompeo said that the US was ready to talk to Tehran if the country began behaving 'like a normal nation'. Earlier, President Rouhani said Tehran would be able to talk to the US if it were shown respect for Iran and followed internationally accepted rules of conduct.

US-Iran tensions began escalating sharply in May 2018, when President Trump announced the US's unilateral withdrawal from the 2015 Iran nuclear deal. Last month, on the one year anniversary of Trump's announcement, Iranian leaders said the country would suspend some of their voluntary commitments under the nuclear deal, citing the other signatories' apparent inability to withstand US pressure.