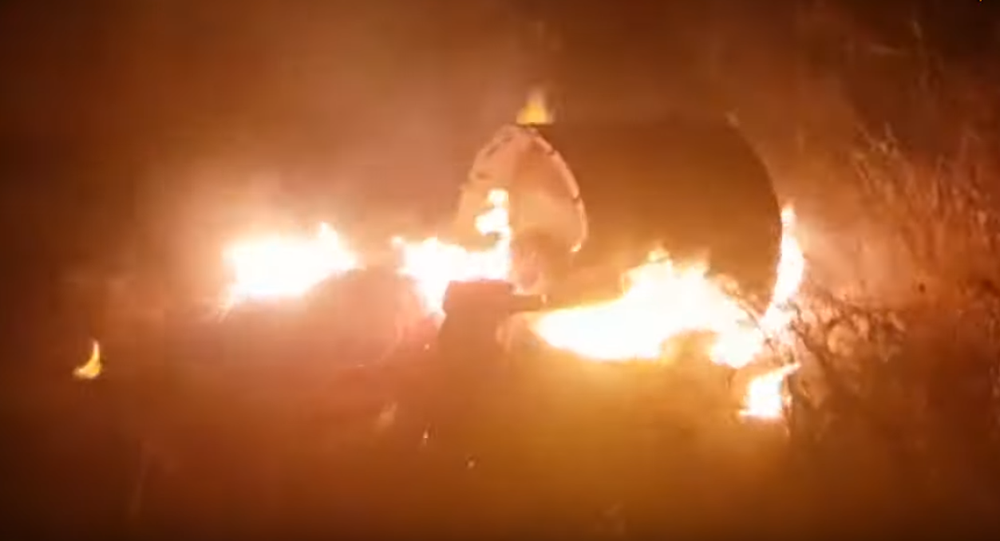 On Sunday, the Israeli military confirmed that it had carried out strikes against military targets in Syria, saying the attack was a response to rocket fire from the country into Israel.

Footage has appeared online showing burning debris on a field near a Syrian air defence battery outside the Damascus suburb city of Kiswah.

The video, taken from multiple angles and distances, shows unidentified men's efforts to put out the flames next to a cylindrical piece of wreckage using dirt and shovels.

It's not clear whether the wreckage is a piece of a downed Israeli missile, or that of an air defence missile fired off to try to stop the Israeli barrage.

© AFP 2021 / JALAA MAREY
Israel Strikes Syrian Military Targets in Response to Golan Rocket Fire (VIDEO)
The Israeli military confirmed Saturday that it attacked two Syrian artillery units, an SA-2 anti-aircraft missile battery and multiple observation and intelligence posts in response to shelling from Syrian territory. Earlier, the IDF reported that two projectiles had been fired from Syrian territory in the direction of Mount Hermon in the Golan Heights.

Syrian media reported that the country's air defences had shot down a number of enemy missiles south of Damascus, and noted that continued strikes killed three Syrian soldiers and injured seven others.

On Sunday night, Syrian military sources said that the Israeli military attacked the T-4 military airbase in Homs, with two of the projectiles said to have been shot down. At least one person was killed and two others were injured in that strike.

© CC0
WATCH Syrian Army Uncover Massive Multi-TONNE Haul of US-Made C4
Last week, Israel launched a separate attack against a Syrian military target in Quneitra region after an Israeli fighter jet operating in the area was reportedly targeted by the Syrian military. Syrian media reported that several people were injured in that assault.

Tel Aviv has countless air attacks in Syria in recent years, justifying them by saying their aim is to counter the alleged Iranian presence in the war-torn country, including that of Shia militant group Hezbollah. Syria has condemned the attacks as a blatant violation of international law, and said that Iran's presence in the country was limited to assistance aimed at helping the Arab Republic in its fight against terrorism.

Militants Attacked Settlements in 2 Syrian Provinces in Past 24 Hours