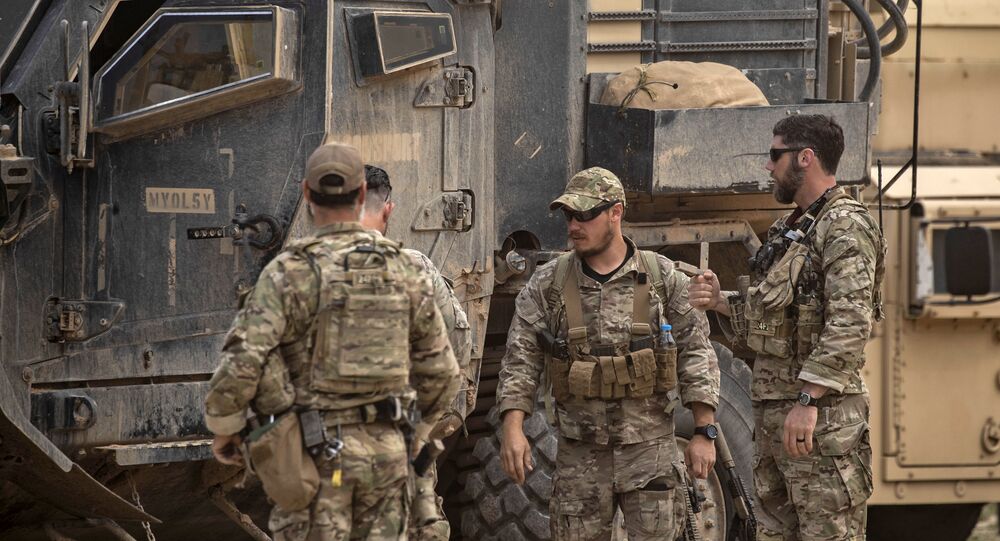 The arrival of the Trump administration in the White House has marked a major shift in US policy towards Iran. Since then, Washington has withdrawn from the landmark Iran nuclear deal and ramped up its military presence in the region, targeting the Islamic Republic.

In an interview with The Guardian, Alistair Burt, former Parliamentary Under-Secretary of State for Foreign Affairs, who left office at the end of March 2019, has shared his concerns regarding Washington’s Middle East policy under Donald Trump, pointing out that in its current state it could spark a war.

"America at present does not believe in compromise – it is a case of hitting them in the nuts first, and sooner or later they follow. It is a not unfamiliar technique, and not always unsuccessful. And [Trump’s] proud of it", he said.

Burt argued that instead of bluntly pushing its agenda, Washington should sit down at the negotiating table with other Middle East states, including Iran. He added that unless the parties find a solution to the constantly escalating tensions, they might turn into something far worse.

“If nothing changes, this is going to get worse and somebody somewhere is going to do something stupid and you will have the modern equivalent of the Archduke being shot in some nameless street in Sarajevo", Burt said in an obvious reference to the incident that led to the outbreak of the First World War.

The former British under-secretary of state said that the US withdrawal from the nuclear deal with Iran last year has contributed greatly to the instability in the region. He noted that while Trump's actions have been dictated by the urge to fulfil his election promises, there is also a "nexus of people" in his administration, who are openly hostile towards the Islamic Republic and who, as Burt fears, might be looking to conduct some provocations.

The ex-UK official named the US president's National Security Advisor as an example of such a person. Burt recalled that Bolton has "long had a barely concealed aggressive stance" towards Iran and now he holds a major position in the White House. While the former UK under-secretary admitted that Bolton's "heated rhetoric" might have some "genuinely deterrent effect", a policy of maximum pressure won't work with Iran.

"The Iran crisis cries out for negotiation, but instead of bringing parties in and saying ‘This is what we need to do’, the posture is ‘It is blindingly obvious that these people are villains and if you are not for us, you are against us, and you will have to pay the consequences", he said.

Burt further argued that the sanctions pressure on Tehran hasn't resulted in a shift of its policies, but rather allowed hardliners to gain more power, while at the same time "isolating reformers".

Relations between Iran and the US went into a downward spiral after Washington announced on 8 May 2018 it was withdrawing from the Joint Comprehensive Plan of Action (JCPOA), also known as Iran nuclear deal - an international agreement reached in 2015 by Iran, the United States, Russia, France, China, the UK, Germany, and the EU. The accord lifted economic sanctions from the Islamic Republic in exchange for limiting its nuclear programme, but following the withdrawal, the US imposed new sanctions on the country's energy, banking, and shipping sectors.

The US decision was criticised by all remaining parties to the international accord, who vowed to try to preserve it. Washington in turn threatened to impose sanctions on any state, continuing to do business with Tehran.

The conflict between the two states was further exacerbated by the US military build-up in the Middle East with forces being deployed with announced goal of deterring the alleged "threat" from Iran. Washington has sent one of its aircraft carrier strike groups, 1,500 troops, and a regiment of B-52 bombers to the region for that cause.

In addition, US President Donald Trump has repeatedly threatened that any attempt by Tehran to attack the US or its allies in the region will be the "official end of Iran". The Islamic Republic responded to those threats by vowing to resist the US until it retreats with Supreme Leader Ali Khamenei noting that the Iranian people do not seek war with Americans.