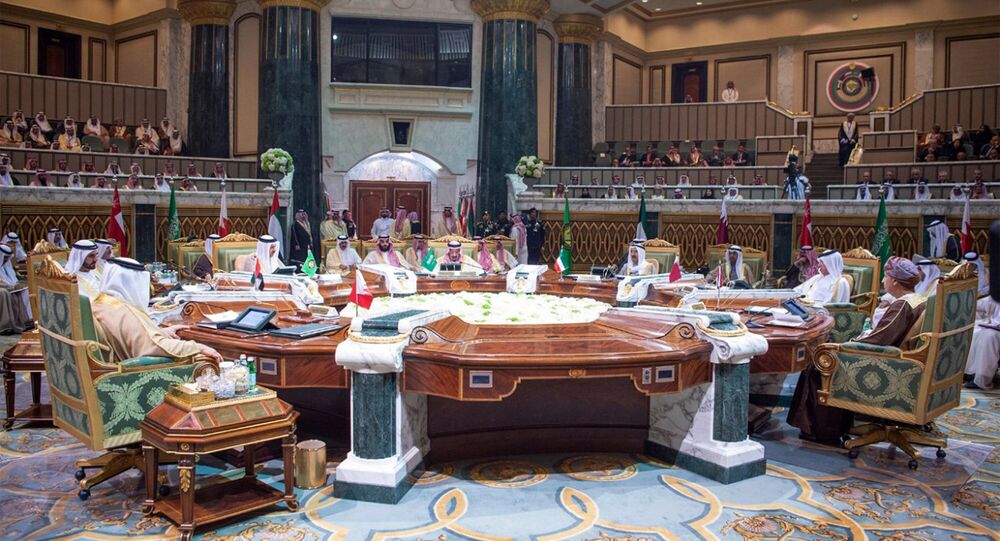 Gulf Arab states have declared unity in the face of "Iran threats" according to a communique of the summit in Mecca.

"We condemn the launch of ballistic missiles manufactured in Iran from Yemen into Saudi Arabia. We condemn the operations that the Houthis carry out against Saudi Arabia," the Arab states said in the communique.

"We condemn Iran’s interference in the Syrian crisis and [Tehran's] negative effect on Syria’s territorial integrity," the Arab states said in a communique of an emergency summit in Mecca, which was convened by Saudi Arabia.

© REUTERS / Satish Kumar
Saudi Arabia Calls for 'All Means of Force' to Confront Attacks Blamed on Iran
Arab state leaders also said on Friday that they remained committed to the previously made agreements on the Palestinian issue settlement.

"We are stating our commitment to the decisions taken at previous Arab summits in relation to the Palestinian issue," the Arab states said in a final communique of their emergency summit in Mecca.

The statement was made in the light of the US plans to announce its long-anticipated "deal of the century," a peace plan for the solution of the Israeli-Palestinian conflict. For years, the Arab world remains committed to the Arab Peace Initiative, originally agreed upon at the Beirut Summit back in 2002.

Earlier, Saudi King Salman bin Abdulaziz Al Saud said said in an opening speech at the emergency Arab Summit that the Palestinian cause will remain the main priority for the Arab world until the establishment of an independent Palestinian state with its capital in East Jerusalem.

The Arab Gulf monarchies also called on the international community to prevent Iran from creating its nuclear weapons and to impose stricter restrictions on its ballistic missile program.

"The resolution called on the international community to implement its obligations in maintaining international peace and security and taking more effective and strong actions to prevent Iran from obtaining a nuclear arsenal and imposing stricter restrictions on Iran’s ballistic missile program," the states said in a communique of an emergency Gulf summit, convened by Saudi Arabia in Mecca.

In the same statement, the Gulf states "reaffirmed their support for the US strategy against Iran, including countering Iranian programs in the area of nuclear technologies and ballistic missiles; its destabilizing activities in the region; and its support for terrorism."

© REUTERS / Rodi Said
US Vows to Respond With Military Force if Iran 'Attacks American Interests'
The countries also condemned Iran for creating alleged threats for maritime traffic and the Gulf oil exports to the global market. They also called on the international community to implement its obligations on ensuring the freedom of maritime traffic after the recent threats and attacks on the Gulf oil assets.

On May 12, four oil tankers — including two Saudi vessels and a UAE-flagged ship — were targeted in an attack off of the UAE’s exclusive economic zone. US National Security Adviser John Bolton has claimed that Iran was most certainly behind the attack, while Tehran has denied the allegations.