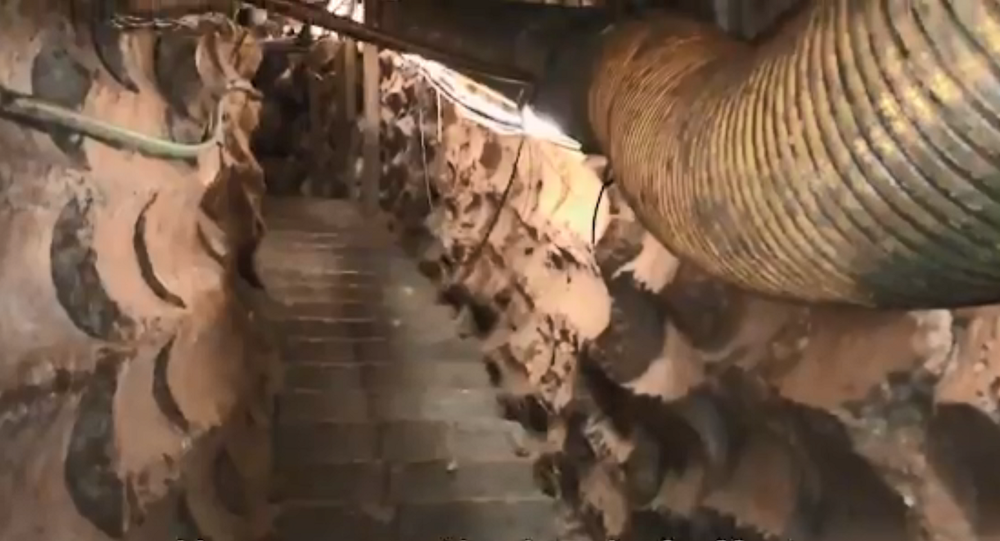 The Israel Defense Forces (IDF) released a video Wednesday showing the inside of a huge tunnel dug by the Hezbollah militant group underneath the Israel-Lebanon border.

The tunnel was the deepest and longest of the six uncovered last December; it was also the last discovered, found only on January 13, near the close of the tunnel-hunting Operation Northern Shield, Sputnik reported.

Initially reported as being dug at a depth of 180 feet and running almost 2,600 feet long, the tunnel actually turned out to be much bigger: the Times of Israel reported Thursday that the passageway was 260 feet deep and 3,280 feet long.

The tunnel began near the Lebanese village of Ramiya, close to the border area with Israel, and penetrated 250 feet into Israeli territory, emerging near the Israeli villages of Shtula and Zar'it.

Now, however, the IDF is preparing to destroy the tunnel. The Times noted it was booby-trapped after being found, and the entranceways will be collapsed in the coming days. A video recorded by IDF soldiers shows the interior of the passage, which sports electricity, ventilation and communications systems.

​"We are neutralizing the flagship tunnel of the Hezbollah terrorist group. This is an attack tunnel," Col. Roi Levi, commander of the Baram Regional Brigade, told the Times. The tunnels are believed to have been made with the intention of launching sneak attacks into Israeli territory by Hezbollah, a Shiite militia with a large power base in southern Lebanon that once fought the invading Israeli military to a standstill.

Hezbollah said in January that construction on some of the tunnels began before the 2006 war with Israel. That would mean they weren't in violation of United Nations Security Council Resolution 1701, which ended the war and which governs the maintenance of the Blue Line separating Lebanon and Israel.

The IDF said the tunnel would have taken years to complete, but denied the tunnel was very old. However, Sputnik reported that then-IDF Northern Command chief Benny Gantz admitted to having intelligence about the tunnels' inception back in 2005, but failed to take them seriously.

News of the tunnel's imminent destruction comes amid reports that an IDF drone strike blew up a "spying device" in southern Lebanon on Monday, following a civil disturbance in which several Lebanese civilians tried to scale the Blue Line fence. Lebanese TV network al-Mayadeen reported the strike, but the IDF has so far declined to comment on the incident.

US Adds 2 Individuals, 3 Entities to Sanctions List Over Links to Hezbollah