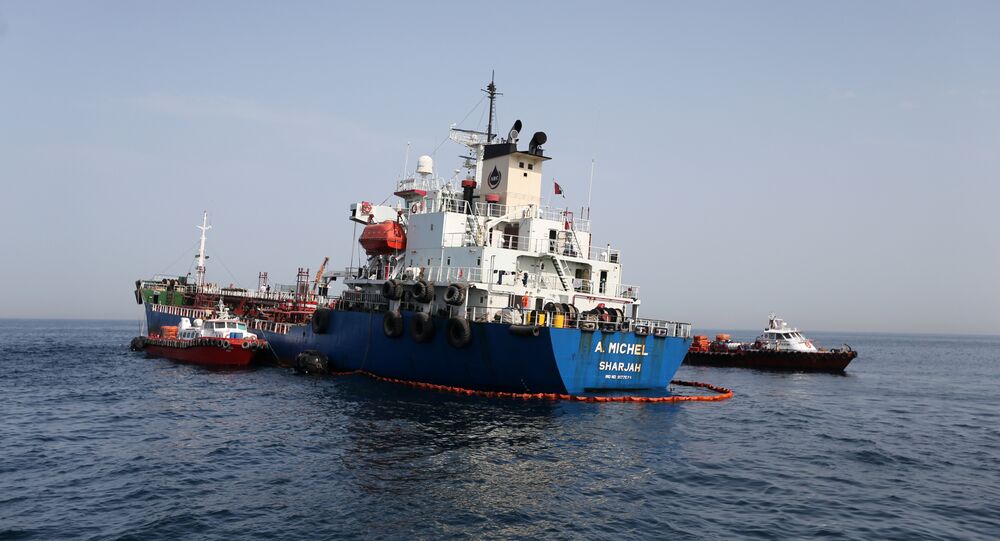 Two Saudi oil tankers and two other vessels were targeted earlier this month near Fujairah, one of the seven Arab emirates, in what the UAE's Foreign Ministry has described as “acts of sabotage”.

During a meeting of foreign ministers for the Organisation of Islamic Cooperation on Thursday, Saudi Arabia's Foreign Minister Ibrahim al-Assaf called on Muslim nations to "confront" vessel attacks off the UAE coast that the United States has blamed on Iran with "all means of force and firmness".

The minister said the alleged sabotage of ships and a recent drone attack on a Saudi oil pipeline require "more efforts to counter the terrorist acts of extremist and terrorist groups".

© REUTERS / Satish Kumar
Iran Lambasts Bolton's Accusations of Involvement in Attacks on UAE Oil Tankers
Saudi Prince Khalid bin Salman bin Abdulaziz has claimed in a tweet that the drone strike was "ordered by the regime in Tehran, and carried out by the Houthis", but Iran has denied its involvement.

Al-Assaf's call to action comes just a day after US National Security Advisor John Bolton said that "it is clear" that those attacks on four oil tankers in Fujairah earlier this month were "naval mines almost certainly from Iran".

Bolton then continued by saying that additional US troops in the Middle East had been sent to "act as a deterrent".

"The point is to make it very clear to Iran and its surrogates that these kinds of actions risk a very strong response from the United States".

"But, Mr Bolton and other warmongers need to know that the strategic patience, high vigilance and full defence readiness of the Islamic Republic of Iran, which emanates from the strong resolve of its great nation, will not let them fulfill their ominous schemes to create chaos in the region", Mousavi said.

In a parallel development, US President Donald Trump has confirmed Washington's intention to beef up the country's military presence in the Middle East and that the Pentagon will deploy 1,500 more troops in addition to the aircraft carrier strike group, Patriot missiles, B-52 bombers and F-15 fighters already dispatched.

In the wake of his announcement, Iran's Foreign Minister Javad Zarif described the deployment of US military reinforcements to the Middle East as a "threat" to international peace, per the Islamic Republic News Agency (IRNA).

"The increase of the American presence in our region is very dangerous and constitutes a threat to international peace and security that must be faced".

As tensions with the US soar, Zarif has signalled Iran’s readiness to clinch a non-aggression pact with its immediate neighbours in the Persian Gulf.

© REUTERS / Satish Kumar
Bolton Claims Iran Was "Almost Certainly" Behind Latest Attacks on UAE Ships
A few days later, the country's ambassador to France, Bahram Qassemi, told a French parliamentary conference that it was important for all nations in the region to take steps towards a more stable Middle East and blasted some countries for their reluctance to heed “Iran's call to reduce tensions and take efforts to consolidate peace and stability in the region”.

On 12 May, four oil tankers — two Saudi, two others alleged to belong to Norway and the UAE — were targeted in what Abu Dhabi described as "acts of sabotage" near Fujairah.

Shortly after, several unnamed US officials told AP that "Iranian or Iranian-backed proxies" are believed to be responsible for the incident, but Tehran has denied any involvement and urged for an investigation, cautioning against any "conspiracy orchestrated by ill-wishers".