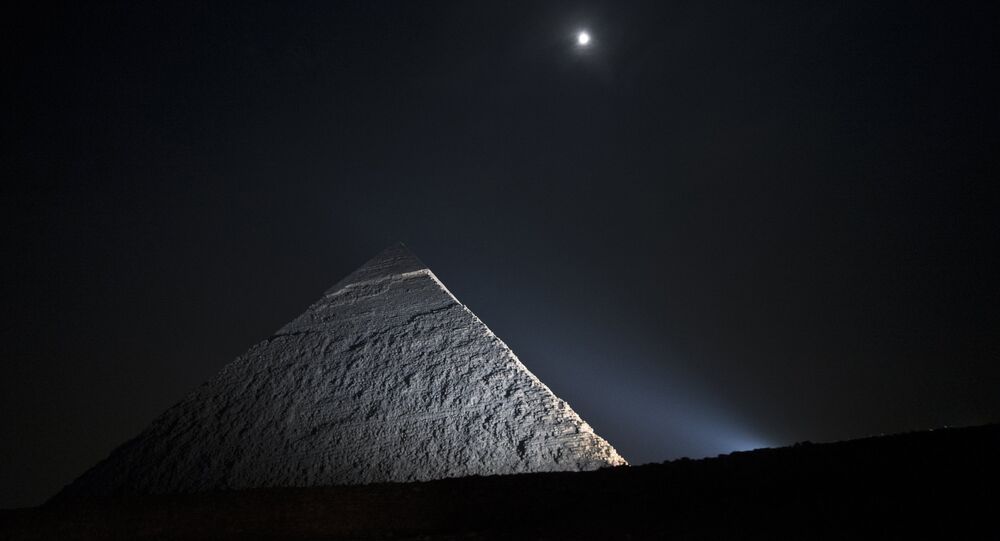 Khufu’s Ship is an ancient Egyptian vessel which was discovered near the Great Pyramid of Giza; its original purpose has baffled the imagination of archaeologists for decades.

As Egyptologists commemorate the 65th anniversary of the discovery of the Khufu Ship, the mystery of the vessel, which was uncovered in Giza on 26 May 1954, has lost none of its appeal.

Unearthed near the Great Pyramid of Giza, also known as the Pyramid of Khufu, the ancient vessel dates back 4,600 years, and still has archaeologists puzzled over what it was originally intended for, writes the Express.

Khufu’s Ship, Solar Barque // 2500 BC. This boat was buried at the foot of the Great Pyramid of Giza (which also belonged to Khufu)… rad pic.twitter.com/FXSgIies47

Khufu’s Ship was found and unearthed on the south side of the Great Pyramid by archaeologist Kamal el-Mallakh.

The dismantled vessel, in its entire form consisting of over 1,200 cedar-wood pieces, was found in five pits near the Great Pyramid of Khufu concealed in an air-tight vault shrouded in 42 limestone blocks.

The Egyptian Department of Antiquities worked painstakingly for years to fully reconstruct the ship without damaging it. Today, however, they are reportedly no closer to conclusively understanding any definite answers about its origin.

Today in 1954, the Khufu ship is discovered at the foot of the Great Pyramid of Giza. The ship was found sealed in a pit as part of Pharaoh Khufu's grave goods. Dating from around 2500 BC, is the oldest intact vessel ever discovered. #History pic.twitter.com/HfLUWZX18x

Experts generally concur that the beautiful boat was built for the great Pharaoh Khufu, but little is known about its exact purpose. Some believe the mysterious Khufu Ship was constructed to carry the Pharaoh into the afterlife, but others are of the opinion the vessel holds the secret of the Pyramids’ construction.

A common theory is Khufu’s Ship was designed similarly to the Sun god Ra’s so-called solar barge, known as Atet, which would ferry the Egyptian god across the skies, shedding light onto the world below.

This theory suggests that Khufu’s Ship could have been constructed to transport the dead Pharaoh’s spirit into the afterlife alongside the god Ra.

Transportation to the afterlife fit for a King, Khufu's Ship. 2589-2566 BC pic.twitter.com/hPL6i9vb3J

The artefact is currently housed at the foot of the Great Pyramid, in the Solar Boat Museum, whose experts claim ancient Egyptians would bury boats like this next to their dead.

The museum website states: “Ancient Egyptians used to bury a ‘solar barge’ near the tomb of their pharaoh because they believed that their ruler needed transportation in the afterlife.”

Intriguingly, though, there are some signs that the vessel was used before it was dismantled and stored, suggesting that the ship may have been built to physically ferry the Pharaoh after he died.

This small clue puts forward the theory that Khufu’s Ship carried the Pharaoh from the ancient city of Memphis to his final resting place in Giza.

Other experts, such as British writer Graham Hancock, have speculated that the ancient vessel may have been used to take the Pharaoh out to sea in his lifetime.

Finally, there are some who claim the ship’s construction holds the key to solving the mystery of how the Great Pyramid of Giza was built.

Author and contributor to Ancient-Origins.com Istvan Soros wrote: “In my opinion, the entire craft was specifically designed to lift objects.

"Its size allowed it to easily hoist stone blocks of two or three tonnes, and on open water it could transport these to wherever they were needed.”

If one goes along with this fascinating theory, the barge’s “asymmetric” design served to use it as a lever of sorts, dipping in and out of water.

“The structure of the prow stretches out higher than the stern, giving it the ability to dip and rise approximately five metres. Evidently, this is what it was designed to do,” says Soros.