"Militants of the Hayat Tahrir al-Sham terror organization [outlawed in Russia] shelled the city of As Suqaylabiyah from multiple rocket launchers five times [over the day]. In total, they launched 38 rockets. Several rockets hit the National Hospital in As Suqaylabiyah. According to the Syrian emergency services, five civilian residents were killed and 12 others were injured," Maj. Gen. Viktor Kupchishin said at a briefing.

As Suqaylabiyah is a Christian Syrian city, which belongs to the Hama Governorate.

On Saturday, the Russian centre for Syrian Reconciliation reported that militants from Hayat Tahrir al-Sham group which emerged after the dissolution of Al Nusra shelled the Syrian province of Hama with 20 projectiles, killing at least 4 people and injuring 7 civilians.

The Centre said at the time that the terrorists had launched an offensive in the Idlib demilitarized zone, attacking Syrian government forces positions near the settlements of al-Hairat and Mgair in the north of Hama province.

Earlier Viktor Kupchishin warned that terrorists in the Idlib de-escalation zone were preparing up to four vehicles filled with explosives to help them break through Syrian army defensive positions.

Speaking at the briefing on Friday, the head of the Russian Defence Ministry's Center for Syrian Reconciliation said that more than 800 militants, at least seven tanks, three infantry fighting vehicles and 15 pickup trucks with heavy machine guns had already arrived just southwest of the Idlib de-escalation zone. 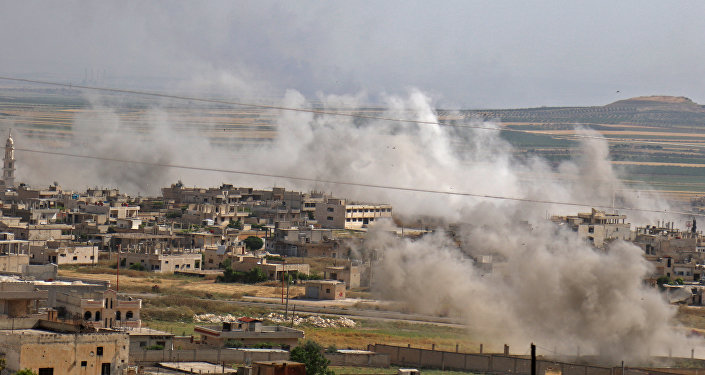 © AFP 2019 / Anas AL-dyab
Terrorists to Use Truck Bombs to Break Through Syrian Army Lines - Russian MoD
In early May, terrorists escalated attack frequency in the Syrian provinces of Hama, Aleppo and Latakia.