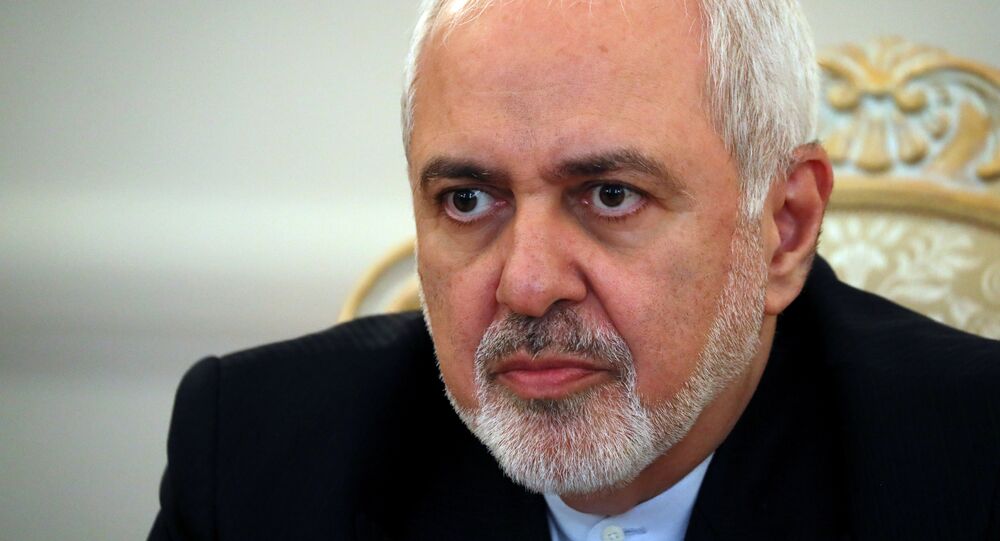 Iran seeks to strengthen trade ties with its allies amid growing tensions with the US, as Washington increases its military presence in the region after re-imposing sanctions lifted earlier by the Barack Obama administration.

The Iranian Foreign Minister called on the international community and regional powers to resist US sanctions lest the world will fall into disorder during his visit to Pakistan Thursday.

© AFP 2021 / STR
'If US Doesn’t Dare' Attack Iran, It's Due 'Spirit of Resistance' – Iranian Military Commander
In his speech made shortly after his arrival to Islamabad, Zarif warned that failure to stop US’s “hegemonic policies,” will result in the world falling into “hands of those who don’t believe in laws,” IRNA report says.

He also called on regional powers to act on improving stability in the region.

“Regional states have to stand against the sanctions for their own interests,” he said.

Foreign Minister Zarif arrived in Pakistan Thursday to propose a project of interconnecting the two neighbouring ports: Iran’s Chabahar and Pakistan’s Gwadar via a railroad.

“We believe Chabahar and Gwadar complement each other and we can connect Chabahar and Gwadar and then through that can connect Gwadar to our entire railroad system from Iran to the north corridor through Turkmenistan, Kazakhstan, Azerbaijan, Russia and Turkey,” Zarif said, adding that Iran plans to connect its railroads with Iraq as well.

Chabahar is a free trade zone established in 1992, which rose to prominence due to its status as Iran’s only open ocean port and its proximity to oil and gas resources. Currently, Iran has made the development of Chabahar its top priority policy, according to Zarif.

© REUTERS / P. Ravikumar
Russia, Pakistan Call for Int'l Efforts to Avoid Military Confrontation in Space
Speaking at Chabahar earlier Thursday, Zarif said interconnection of Pakistan, Afghanistan and Iran will bring the Iranian allies closer together, which should contribute to the development, stability and security of the region, IRNA report says.

Recently, the tensions between Tehran and Washington have escalated significantly. In 2018, US President Donald Trump announced Washington’s unilateral withdrawal from the Iranian Deal. Earlier this year, the US added Iran’s Revolutionary Guards Corps to a list of foreign terrorist organizations. In May, the US sent a carrier strike group led by USS Abraham Lincoln to the Arabian Sea. Other reports indicate US military amass ground troops in neighbouring Iraq, with Iraqi sources saying the US stationed some 10,000 soldiers in several military bases.