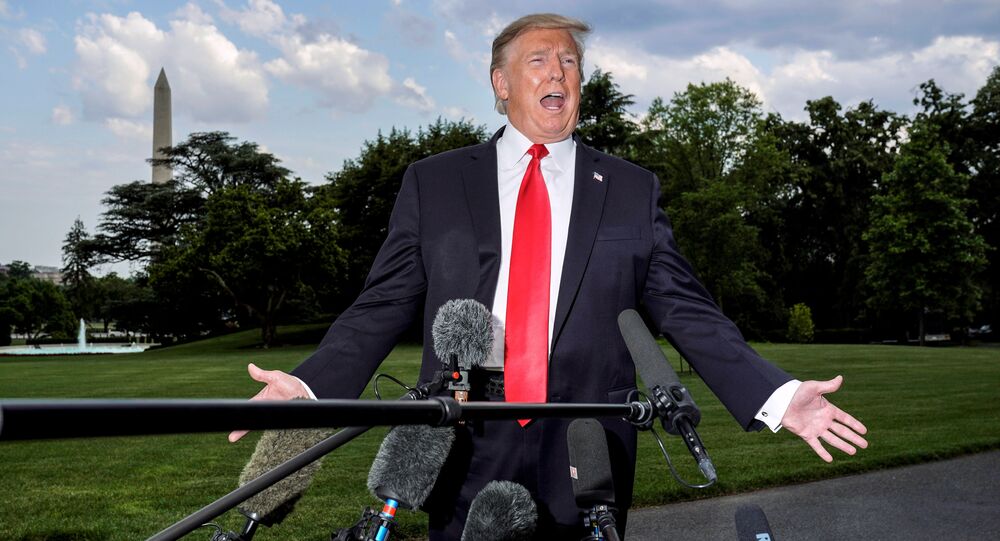 The US president has repeatedly come up with tirades targeting Iran in recent days. He has warned it against taking action against the US, vowing it would be the end of Iran and calling on the Islamic Republic to engage in talks with Washington.

In an interview with CNN Hossein Amir-Abdollahian, Special Aide in International Affairs to the President of the Iranian Parliament has called US President Donald Trump a "crazy president", citing his latest tweets on Iran that allegedly left the White House "confused" about the president's actual intentions. The Iranian official noted that Trump's messages were "self-contradictory".

"In his mind, Trump thinks he has a gun to Iran's head with sanctions and he is trying to shut down our economy. This is all in his imagination. Now he wants us to call him? This is a crazy president!" Hossein Amir-Abdollahian said.

The official also stated that the White House has allegedly been torn apart by contradictions with West Wing "warmongers" such as National Security Adviser John Bolton and the president, who "is not quite balanced and stable in his decision making". Amir-Abdollahian said that due to this situation in Washington, Tehran is receiving contradictory signals from the US and can't comprehend "who owns the White House".

Trump recently called Iran "hostile" and vowed to respond to its actions with "great force", noting at the same time that Tehran currently shows no intentions of wanting to attack the US. Prior to that, he threatened the Islamic Republic that it would be "the official end of Iran", if it decides to "fight". Trump's comments were preceded by the deployment of a US carrier strike group to the Persian Gulf region and reported deployment of B-52 regiment to the Middle East.

READ MORE: Trump: 'If Iran Wants to Fight, That Will Be the Official End of Iran'

Tehran responded to his remarks stating that Washington's "genocidal taunts" and economic sanctions won't "end Iran". Iranian Supreme Leader Ali Khamenei, furthermore, stated that his country doesn't seek war with the US, but will resist its pressure until Washington is "forced into a retreat".

Trump has also called on Tehran to initiate talks with Washington to achieve a peaceful resolution to the matter, when Iran is "ready". He argued on 16 May that the Islamic Republic will agree to negotiations "soon". However, Iranian President Hassan Rouhani stated that Washington had already approached Tehran on several occasions to hold talks, adding that now is not the time to hold bilateral negotiations.

The US intensified its economic pressure on Iran in May by ending waivers to Iranian oil importers, which protected several states from falling under re-imposed American sanctions against the Islamic Republic. The sanctions against Iran's energy, banking and shipping sectors came into effect early in November after the US withdrew from the Iran nuclear deal in May 2018.

On the anniversary of the US withdrawal from the accord, 8 May 2019, Tehran announced it would backtrack on some of its "voluntary" commitments under the nuclear deal citing the lack of resistance of the remaining signatories towards US pressure. Tehran has repeatedly slammed the EU's efforts to establish a mechanism to bypass the American sanctions, called INSTAX. Iran's complaints stem namely from a lack of functionality to sell oil, prior to the announcement.

Trump: 'If Iran Wants to Fight, That Will Be the Official End of Iran' - Really?