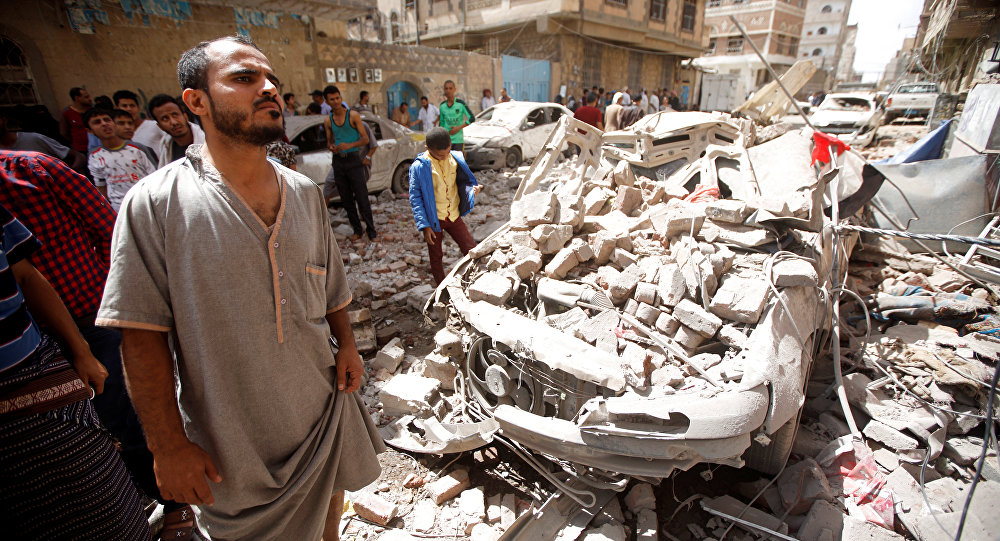 Yemeni Minister of Public Health and Population Taha Al-Mutwakel recently confirmed that at least 425 medical centers have been targeted by the Saudi-led coalition since the civil war began in Yemen in 2015.

"During the four years of war on Yemen, hospitals have been repeatedly targeted and destroyed by the Saudi-led coalition which does not value human life, and does not observe humanitarian principles, and all Yemeni people including women and children have been attacked in this war," Al-Mutwakel recently told Iran Press.

"Health conditions have suffered a lot in this war, and the Saudi-led military alliance has deliberately carried out several air strikes on the health facilities of the non-governmental organization, Doctors Without Borders of Spain, in the region of 'Abs," he added. Abs is a coastal town located in Yemen's Hajjah Governorate.

Yemen, one of the Arab world's poorest countries, has been engulfed in a violent conflict between a government-in-exile headed by President Abdrabuh Mansour Hadi and the armed Shiite Houthi movement, also known as Ansar Allah and backed by army units loyal to former President Ali Abdullah Saleh, since March 2015. The conflict intensified when a Saudi-led, US-backed coalition began launching massive airstrikes against the Houthi faction in 2015.

"The US has been heavily involved in the Saudi coalition's war in Yemen" through targeting assistance, military training, aircraft maintenance and repair and direct arms sales and weapons transfers, Hassan El-Tayyab, co-director of Just Foreign Policy, an organization dedicated to reforming US foreign policy, told Sputnik Monday. "So all of this, I think, adds up to a deep complicity in this horrible war."

Saudi coalition forces armed with US-made missiles and other weapons have killed thousands of Yemenis. On March 14, the United Nations' Office of the High Commissioner for Human Rights (OHCHR) verified the deaths of at least 7,072 civilians since March 2015 and the injuries of at least 11,205. The actual death tolls are likely to be much higher, according to the UN. In November, the Associated Press reported that the armed conflict has killed at least 57,538 people, noting that this estimate is likely to increase to 70,000 or 80,000 once death tolls from the first nine months of 2015 are taken into account. UNICEF (United Nations Children's Fund) Executive Director Henrietta Fore recently stated that at least 7,300 Yemeni children have been killed since the start of the war.

"Each day, another eight children will be killed, injured or recruited to the fighting. Every 10 minutes, another child will die from a preventable cause," Fore said while addressing the United Nations Security Council last week.

According to El-Tayyab, Saudi Arabian incompetence when it comes to targeting is a major factor in the civilian slaughter — but so is a lack of oversight, and the poor example set by the US in its recent military endeavours.

He also noted that the Houthis are "sitting ducks," lacking the air power to contend with Saudi strikes. "Over 24,000 bombs at this point have been dropped on Yemen from the Saudi-UAE coalition, and I think it's worth noting that the Houthis do not have an air force, so they're just sitting ducks. People often forget that — they think this is a fair fight, but one side has an air force and the other one doesn't."

Saudi Arabia is also aware that it has hit many Doctors Without Borders hospitals, and has even "gone so far as to blame" the humanitarian medical organization for having its hospitals struck because it failed to display emblems identifying the building as a hospital or didn't request to be added to a no-strike list, he said. "But in fact there are logos on their hospitals and they have written to let the coalition know where they are, so that's completely absurd."

Yemen, pounded by airstrikes and gripped by famine, needs its hospitals more than ever. Cholera, a deadly disease caused by the bacterium Vibrio cholera that results in diarrhea and dehydration, has rapidly spread during the war as a result of poor hygiene and sanitation, as well as a lack of access to clean water.

"Access to medical facilities is crucial right now for this population," El-Tayyab told Sputnik. "We've got outbreaks of cholera and other preventable diseases that are occurring, and to have these hospitals not in operation when you've got a cholera outbreak of 1.3 million people and 14 million people on the brink of famine is devastating."

And it might only get worse, as Saudi tactics drive out foreign aid workers. "The Saudi air force employs this horrible tactic called a double-tap," which involves bombing a target multiple times consecutively, even after first-responders arrive. "So there's a lot of reluctance in the medical community to want to even help because they're afraid they'll be directly targeted. As a result, beyond this catastrophe that's happening right now, there's a risk that non-governmental organizations and other humanitarian aid organizations might pull out of Yemen entirely if they don't feel their workers are safe."

There are several ways to end US funding of the war in Yemen, according to El-Tayyab. US President Donald Trump previously vetoed one of them: a bill passed by Congress to end US military funding of the war by invoking the War Powers Resolution, a 1973 law intended to prevent the president from waging war without a declaration from Congress.

However, the most plausible option is the suspension of the transfer and sale of weapons to the Saudi coalition, the prohibition of intelligence sharing and logistical support to Saudi Arabia's activities in the UAE (which is part of the Saudi-coalition), and the suspension of US direct commercial sales and licenses for maintenance of fighter aircraft used in operations in Yemen, according to El-Tayyab. Congress may be able to defund the Saudi-led coalition by establishing statutory restrictions through the 2020 National Defense Authorization Act that prohibit US military funding in Yemen, which would allow Congress to effectively end the war by invoking its constitutional power of the purse.