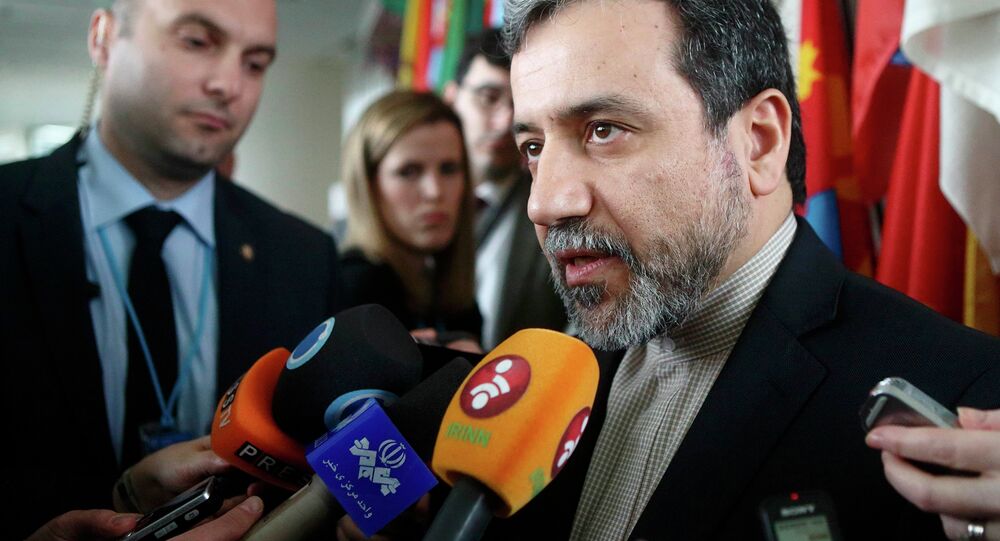 Earlier in the day, US President Donald Trump signed an executive order imposing sanctions on Iran, relating to iron, steel, aluminium, and copper. The move came after Tehran said that it was suspending some of its obligations under the Joint Comprehensive Plan of Actions (JCPOA) in light of the US decision to intensify sanctions.

Iranian Deputy Foreign Minister Abbas Araghchi has reportedly said that Iran had put a JCPOA withdrawal option in the policy agenda, noting that the withdrawal would be carried out gradually, according to the Islamic Republic of Iran Broadcasting (IRIB).

Araghchi was quoted by the IRIB on Telegram.

Earlier in the day, Iran said it was suspending some of its obligations under the nuclear deal in light of the US decision to intensify sanctions.

The US, in its turn, has imposed addditional sanctions, relating to iron, steel, aluminium, and copper against Tehran.

© AP Photo / Mehdi Marizad
France Determined to See Iran Nuclear Deal Implemented - Reports
Iranian President Hassan Rouhani earlier in the day sent a letter to Joint Comprehensive Plan of Action (JCPOA) signatory states, notifying them that Tehran would give the parties to the accord 60 days to return to the negotiating table and ensure that Iran's interests are protected under the agreement.

Exactly one year ago from today, the Trump administration announced that it was exiting the accord and re-imposing sanctions on Tehran.

In the framework of the pressure campaign waging by the US against Iran, the former has designated Iran's Islamic Revolutionary Guard Corps as a foreign terrorist organization, while announcing the deployment of the USS Abraham Lincoln Carrier Strike Group and a bomber task force, that reportedly includes four B-52 nuclear-capable bombers, near Iran.

Tehran, in its turn, placed the United States Central Command (CENTCOM), operating in the Middle East, under the same designation, dubbing the deployment announcement an act of "psychological warfare."

‘Mostly Psychological Warfare’: US Unlikely to Initiate War With Iran