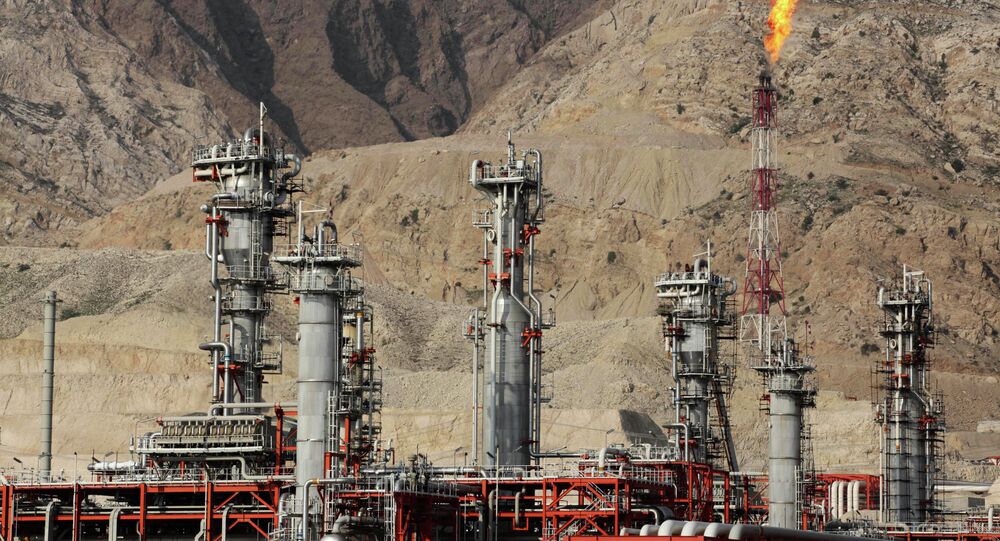 Earlier, Washington indicated that it would not renew the exemptions granted to eight major importers to its tough sanctions on Iranian crude oil exports once they expire later this week, with economists fearing the restrictions may impact the global energy market.

Iran is building up its gas refinery and transmission infrastructure to significantly expand its gas exports to countries such as Iraq and Turkey, National Iranian Gas Company CEO Hassan Montazer Torbati has said.

"Last year, we exported gas to Turkey, Baghdad and Basra with an average of over 40 million cubic meters a day, and this year, gas exports to Iraq will reach more than 35 million cubic meters per day," Torbati said, speaking to reporters at an energy conference in Tehran on Wednesday.

© AFP 2021 / HO / KHAMENEI.IR
Iran Won't Negotiate With US Under Pressure - Revolutionary Guards General
According to the official, Iran, which has the second-largest proven natural gas reserves in the world, will increase its gas refinery and transmission capacity to over a billion cubic metres a day by February 2020.

Bijan Namdar Zangeneh, Iran's petroleum minister, said that the country would bring 18 new petrochemical plants online over the next two years, raising the Islamic Republic's total export capacity to 50 million tonnes, or the equivalent of some $36 billion in revenue per year.

"We will continue to focus on investing in South Pars and plan to increase gas production by 60 million cubic meters before the coming winter," Zangeneh noted.

The South Pars gas field is the largest gas field in the world, accounting for nearly half of Iran's total gas reserves. China's CNPCI and Iran's Petropars entered a cooperation deal on the development of Phase 11 of the Pars field in 2017, with France's Total also participating in the project before pulling out over fears of US sanctions, with the Chinese energy giant later buying France's shares.

Iraq, another US regional partner, relies on Iranian natural gas for as much as 45 per cent of its electricity generation needs, according to PressTV, with Iran transmitting another 1,000 megawatts to the country directly in an electricity transmission deal.

In addition to Turkey and Iraq, Iran has been looking to increase gas exports to countries in the Caucasus region, including Armenia and energy-rich Azerbaijan.

© Wikipedia / Pascal
Kuwaiti Foreign Ministry Says Concerned Over Iranian Threats to Close Strait of Hormuz
The Trump administration slapped Iran with a series of increasingly harsh financial and energy sanctions in May 2018, after Washington unilaterally withdrew from the Iran nuclear deal. These included tough energy restrictions aimed at bringing Iran's oil exports down "to zero" in a bid to cripple the country's economy. China has rejected US pressure and promised to continue imports, with other countries, including Turkey, India and South Korea urging the US to reconsider its stance and renew the exemptions.

Tehran has warned that any direct US efforts to stop its oil exports could lead to the closure of the Strait of Hormuz, the strategic waterway through which about 20 per cent of the world's total oil supplies pass.

The US Treasury Department exempted eight major Iranian crude oil exporters, including China, India, South Korea, Japan, Turkey, Greece and Italy, as well as Taiwan from US sanctions, with the waivers set to expire on 2 May.