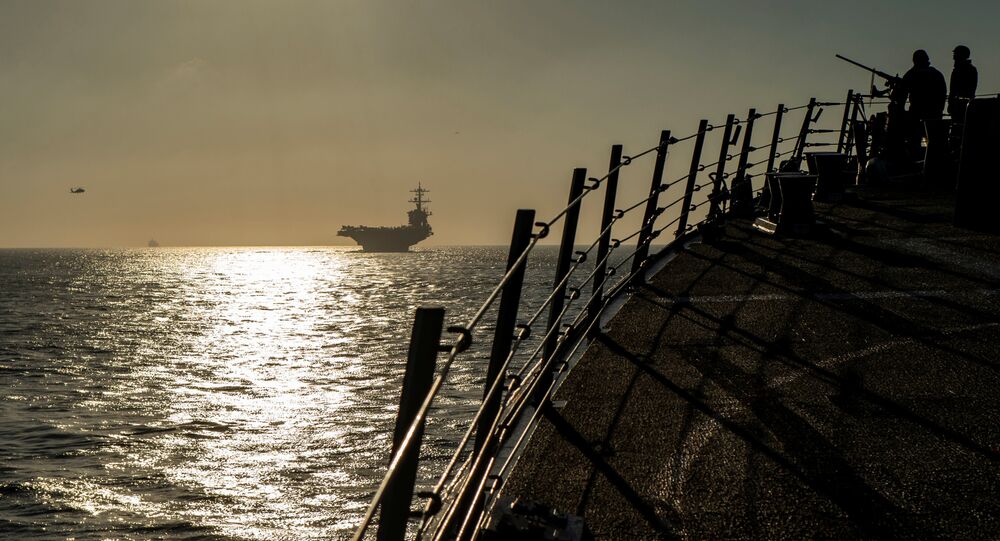 '100K Tonnes of Diplomacy': US Envoy Goads Russia With Aircraft Carriers in Med

Russia expanded its presence in the Mediterranean Sea in 2015 after its military began operations to assist Damascus in its fight against an array of Islamist terrorist groups in Syria.

US Ambassador to Russia Jon Huntsman has characterised US carriers' deployment in the Mediterranean Sea as a signal to Russia.

"Each of the carriers operating in the Mediterranean at this time represent 100,000 tonnes of international diplomacy," Huntsman said, speaking after observing the USS Abraham Lincoln and the USS John C. Stennis carrier strike groups kick off joint combat training operations in the Med on Tuesday.

"Diplomatic communication and dialogue coupled with the strong defence these ships provide demonstrate to Russia that if it truly seeks better relations with the United States, it must cease its destabilising activities around the world," Huntsman added.

© CC BY 2.0 / U.S. Pacific Fleet / 150501-N-JN432-163
US Operating 2 Carrier Strike Groups in Mediterranean for First Time Since 2016 - Navy
The two carrier groups began joint operations in the Mediterranean on Tuesday, with the strike groups consisting of a total of 10 ships, 130 aircraft, and over 9,000 sailors and marines. This is the first deployment of two carrier strike groups in the Med since 2016. According to a Navy press release, the carriers will "work with regional allies and partners at sea" toward NATO maritime integration and "improving collective proficiency and inter-operability."

The US and its allies considerably beefed up their presence in the Mediterranean Sea in recent months, with France deploying its Charles de Gaulle carrier strike group for anti-Daesh (ISIS)* operations in March, and the UK planning to sail its new F-35-carrying HMS Queen Elizabeth in the Mediterranean, the Middle East and Pacific later this year.

US President Donald Trump announced plans to withdraw US forces from Syria late last year, with the time-frame on the withdrawal of the estimated 2,000 troops in the war-torn country pushed back repeatedly since the president made his announcement in December. Last month, the State Department said that some 400 troops would remain in the country for an undefined period. The US has repeatedly used carrier groups in the Med for strikes against Daesh militants since starting their intervention against the terror group in 2014.