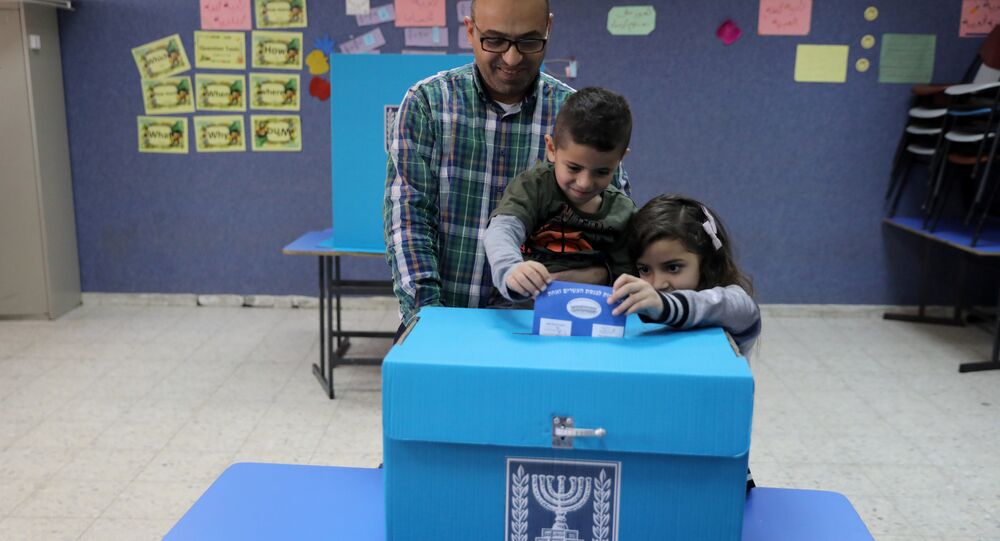 An Israeli PR firm working for Likud boasted Wednesday that its campaign to place 1,200 hidden body cameras on people working at polling stations in Arab neighborhoods had produced the lowest Arab voter turnout seen in years.

"Thanks to us placing observers in every polling station we managed to lower the voter turnout to under 50 percent, the lowest in recent years!" PR company Kaizler Inbar posted on Facebook Wednesday.

© AFP 2020 / JACK GUEZ
‘Do You Want Netanyahu?’: Israelis Vote for PM on Personal, Not Political Basis

"Now it's official — the Likud tried to lower the Arab turnout through illegal means. Hidden cameras, monitoring and voter suppression," MK Ayman Odeh, head of the far-left Hadash-Ta'al slate, told Haaretz. "This is what de-legitimization of a fifth of the citizenry looks like. What started out as unleashed racist incitement continued in the nation-state law and could end with a transfer government and revoking rights."

Haaretz reported that Kaizler Inbar is run by Sagi Kaizler, a former head of a West Bank settlement residents' council, and noted that in 2015, he said: "Arabs are sitting alone in the polling station; we don't trust them. We let them vote in our country even though it's our country. They should at least vote truthfully."

Word emerged of the plan on Tuesday, the date of Israel's Knesset elections, throwing civil rights groups and pro-Palestinian groups into a frenzy.

Central Elections Committee chair Justice Hanan Melcer filed a complaint with Israeli police, who attempted to crack down on the cameras where they found them, but it seems the damage was done: Arabs stayed away from the polls in record numbers.

Al Jazeera noted that in 2015, Prime Minister Benjamin Netanyahu, who was narrowly re-elected to a fifth term in Tuesday's vote, warned Likud supporters to get out and vote, as "Arab voters are heading to the polls in droves."

​Outgoing MK Jamal Zahalka, from the Arab Balad party, told the Times of Israel the cameras were an "illegal" action by the "extremist right" to try and deter Arabs from voting. The Times noted that nobody they interviewed said the cameras intimidated them, but admitted that by 9 p.m. Tuesday, turnout in Arab communities stood at only 46 percent, when it had been 63.7 percent in 2015.

Likud maintained that the purpose of the cameras was to crack down on fraud.

"The problem is with those people in the Arab sector," Likud lawyer Kobi Matza flatly stated to the Times. "The cameras were intended to preserve the integrity of the vote."

"The cameras were not hidden, they were out in the open, and were in places where there is a high suspicion of fraud," Matza said. "I get reports from all over the country that our representatives are being kicked out of polling stations in Arab areas."

Haaretz reported that a government source said Tuesday that "the move was aimed to preserve the purity of the election and to assure that Ra'am-Balad won't pass the electoral threshold through falsifications."

However, both Arab-majority slates, Hadash-Ta'al as well as Balad-Ra'am, still managed to pass the electoral threshold, retaining 10 seats of the 13 they had before.