CAIRO (Sputnik) - French President Emmanuel Macron and Prime Minister Fayez Sarraj of Libya’s UN-backed Government of National Accord held a phone call on Monday to discuss the offensive on Tripoli.

The Libyan National Army of Marshal Khalifa Haftar last Thursday marched on the national capital with the stated goal of wrestling it from terrorists. The administration in Tripoli announced a counteroffensive on Sunday, dubbed Volcano of Rage, to repel the National Army.

The French president "harshly criticized the aggression against the capital, which puts civilians at risk", the Tripoli-based government said in a statement. Sarraj promised to Macron he would "stand up to this aggression", adding Haftar "has only one option which is to immediately stop… and go back to where he came from". 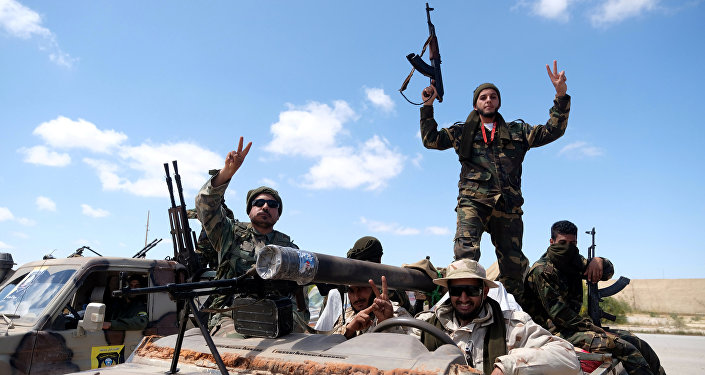 © REUTERS / Esam Omran Al-Fetori
Pompeo: US Urges Forces of Libya's Haftar to Immediately Stop Offensive on Tripoli
On Sunday, the United Nations Support Mission in Libya (UNSMIL) demanded from the conflicting sides to organize a two-hour humanitarian truce for evacuation of those injured during the LNA operation in Tripoli, but the conflicting sides refused to follow the UN request.

Libya has been gripped by political turmoil since its leader, Muammar Gaddafi, was deposed and killed in 2011.

The country is currently split between two rival administrations, with an elected parliament governing the east and the government of Prime Minister Sarraj ruling the west from Tripoli.

READ MORE: Russia Concerned Over Use of Combat Aircraft by Armed Groups in Libya