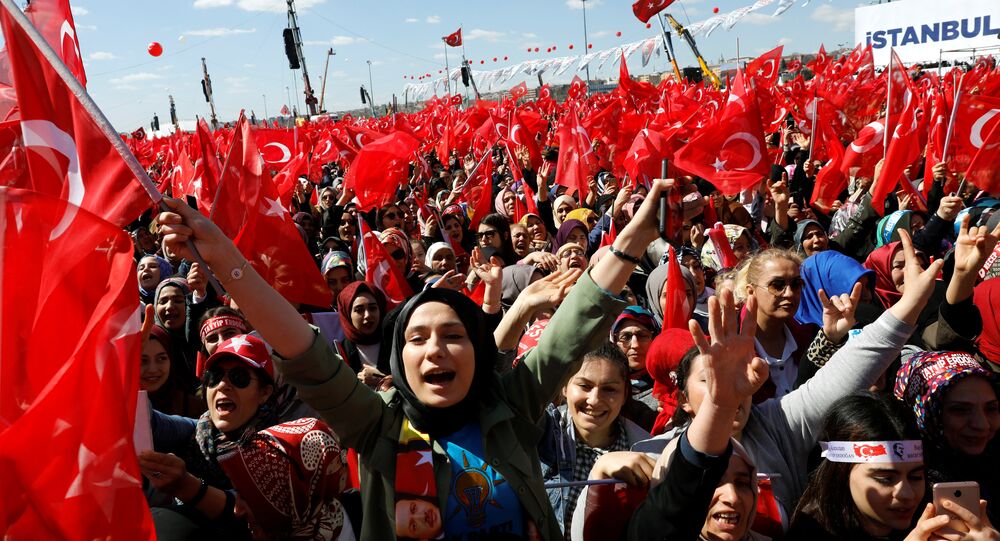 ANKARA (Sputnik) - The mayoral election in Istanbul, which took place on 31 March, was accompanied by systematic irregularities, Turkish President Recep Tayyip Erdogan said on Monday, adding that votes had been stolen from his ruling Justice and Development Party (AKP).

"There were not just some irregularities during the election in Istanbul, there were systematic irregularities… The citizens demand that their rights be fully respected. Our duty is to protect them. There is proof from cameras and other evidence. We are talking about stealing of votes at polling places," Erdogan told journalists.

© AP Photo / Presidential Press Service/Pool
Erdogan Vows to Appeal Municipal Election Results 'Wherever Needed' - Reports
Although the People's Alliance, the political bloc the AKP is part of, received a total of 51.64 percent of the national vote, it lost the vote in Turkey's two main cities — Istanbul and Ankara. The AKP has been adamant in contesting the results through an official recount, while Imamoglu is pushing for Turkey's election board mandating him as the mayor of Istanbul.

On Sunday, the AKP said it was seeking the complete recount of all votes cast in the Istanbul mayoral election, in which Ekrem Imamoglu, an opposition candidate from the Republican People’s Party, won the country's main economic centre by a slim margin of about 14,000 votes, according to preliminary results. Prior to that, the party had applied for the recount of only the ballots that were cancelled.