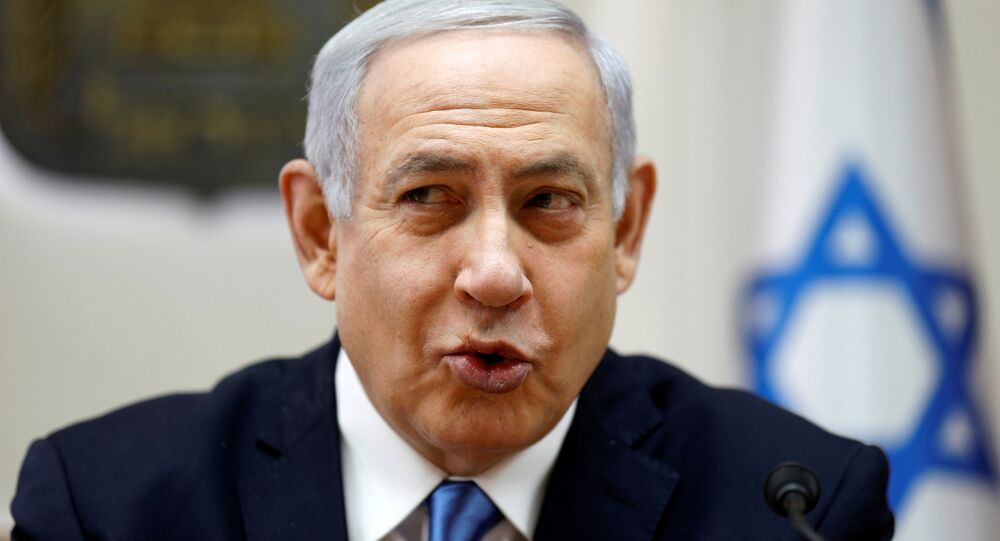 On Saturday, Prime Minister Benjamin Netanyahu announced that he was planning to extend Israeli sovereignty over settlements in the occupied West Bank territories if he wins another term in the upcoming elections, scheduled for 9 April.

Prime Minister Benjamin Netanyahu stated during a pre-election interview with the Hebrew website Arutz 7 on Sunday that a Palestinian state will not be created, "not like the one people are talking about."

"It won't happen," Netanyahu asserted adding that he was "maintaining a united Jerusalem and I am maintaining our control on the entire area west of the Jordan River to prevent another Gaza."

© AP Photo / Ariel Schalit
Trump, Netanyahu to Set Up Palestinian State After Election, Minister Claims
The remark comes after Reuters reported on Saturday that the Israeli prime minister will seek an extension of Israeli sovereignty over settlements in the occupied West Bank territories if he wins another term in the upcoming elections that will take place on 9 April.

In February, Israeli Education Minister Naftali Bennett alleged that Netanyahu and US President Donald Trump were planning to establish a Palestinian state in the West Bank and divide Jerusalem "a day or two after election day." Netanyahu immediately reacted to the claims, describing them as "unfounded."

Israel and Palestine have been in a state of conflict for several decades over border and sovereignty disputes. Currently, Palestine is seeking independence and wants to establish East Jerusalem as its capital. Palestine remains only partially recognized as a state and claims the territories of the Gaza Strip and the West Bank, including East Jerusalem. In 1947, the United Nations worked out a plan to put an end to the conflict, giving most of the West Bank and Gaza to Palestine.

Israel occupied the territories 20 years later but claims to have withdrawn all its forces from Gaza in 2005. The United Nations supports the recognition of Palestine within its pre-1967 borders.