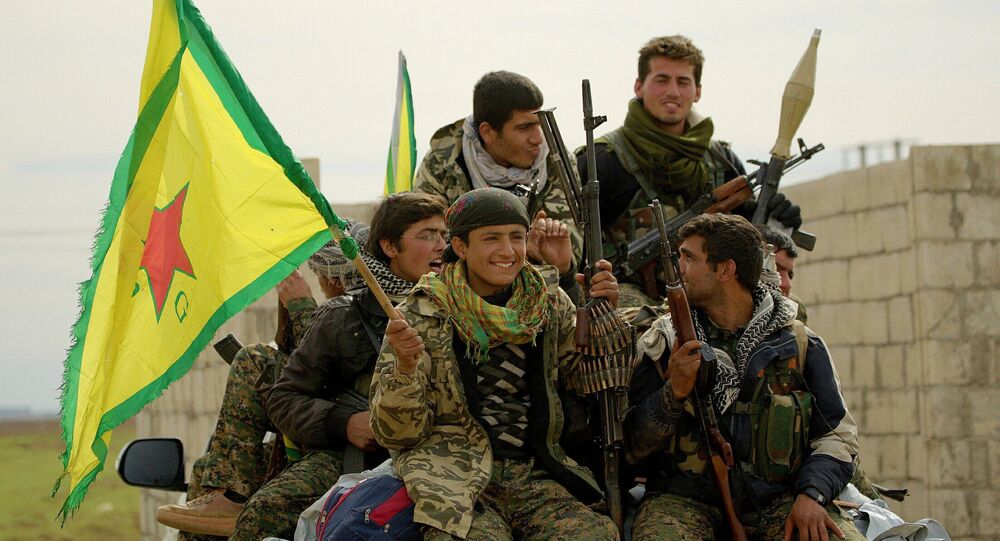 Aidan James, 28, is on trial in London for engaging in acts of terrorism and attending a place used for terrorist training. The YPG is not a proscribed organisation in the UK, although the PKK is on the list of banned groups.

A British jury has been shown journal entries made by a man from Liverpool who travelled to Syria to fight with the Kurdish YPG against Daesh in 2017.

"My so-called country should be proud of the work us volunteers are doing as they have failed to help," James wrote in October 2017.

James admits travelling to Syria, via northern Iraq, in the autumn of 2017 but he denies two counts of engaging in acts of terrorism and one charge of attending a placed used for terrorist training.

Mark Heywood QC, prosecuting, asked Detective Constable Anna Dobson from Merseyside Police about images and a video they found on James' phone when he was arrested on his return to Britain in 2018.

Aidan James, 27 who travelled to Syria to join the Kurdish YPG battling ISIS, appeared in court today charged on terrorism offences.
Aidan denies engaging in conduct in preparation of terrorist acts and two charges of attending a place used for terrorist training. pic.twitter.com/E1QTY7Ypn4

​The jury was shown the video — believed to have been filmed in Makhmur, a Kurdish village in northern Iraq — in which James is shown practising firing a long-barrelled weapon.

Mr Heywood then read out long extracts from James' journal in which he talks about the frustration he felt in Makhmur, waiting to be sent over the border into Syria and onto the frontline against Daesh.

"I am now squad's commander, which is good, more responsibility and because I will sacrifice myself no problem, for my boys," James recorded in his journal in September 2017.

He then described crossing the Tigris river and the Syrian border on 1 October, arriving in the town of Shingal where he joined a "YPG academy" and was given a new name — Sevan, which means warrior in Kurdish.

James updated his Facebook page throughout his stay in Iraq and Syria, including posting images of himself in combat gear and using his nom de guerre, Sevan Firas.

He described himself as a "revolutionary freedom fighter" and said he was there to help the Kurdish people "fighting for an autonomous Kurdish state."

Aidan James, the first Brit to face a terror trial for fighting against Islamic State, said he wanted to stop “the world’s biggest evil” and believed it was a "calling", Old Bailey hears.

​DC Dobson then read out an article in the Liverpool Echo newspaper in October 2017 after a journalist tracked down James and exchanged emails with him about his life in the Middle East.

In the article — headlined "I'm no terrorist" — James said he was "happy to fight against terror" and was fighting for "feminism, humanity, freedom and peace."

"There are people being killed in ways that are unthinkable," James told the journalist.

The jury was told that another British man, Jac Holmes, was killed by Daesh while fighting for YPG in Syria.

"We all get scared and we all know the risks," James was quoted as telling the Echo.

James also told the paper his family were being "hounded" by the UK authorities who were warning them he would be prosecuted on his return.

In a journal entry on 19 October James claimed agents of the Turkish military intelligence, MIT, had tried to kidnap him.

Later entries mentioned clashes between the YPG and the Turkish army in northern Syria and said they were being subjected to daily Turkish airstrikes.

But the YPG was mainly engaged in fighting with Daesh in Raqqa and also in Deir Azor and Afrin.

"Raqqa has been took from Daesh, their so-called capital is now destroyed," James wrote in November 2017.

A negotiator from Merseyside Police contacted James by email and tried to persuade him to return to the UK.

"I know having read the recent newspaper articles that you believe very strongly in the cause you are fighting for and that you have a real passion to right some of the wrongs taking place in Syria and around the world…however you will be very aware that you are putting yourself in considerable danger," the police negotiator told James.

Celebration of the historical victory continues across Kurdistan and north Syrian cities. Kurds and YPG celebrating the victory together in Qamishli today. #SDFDefeatedISIS pic.twitter.com/IlnrKCbiMM

​When James wrote back he trashed an article on the Daily Mirror website as "complete bull****".

"I'm not a mercenary and don't like killing people…I believe in assisting the people here in their fight against Daesh," James added, before quoting from the Magna Carta.

The negotiator wrote back and seemed to assure him that if he returned to the UK he would not be charged.

"If you come home nobody will assume you are a terrorist. I don't know of any case where someone has been charged for fighting in Syria against Daesh," the negotiator wrote to James, who replied that he did not trust the police and had no plans to return to the UK.

In one of his journal entries James wrote about the camaraderie he felt fighting with a group of international volunteers who had come to fight for the YPG.

"The whole world is here to help, all apart from our government. English, Scottish, all over America, Finnish, Australian, French, Spanish, Polish, Russian, Austrian, German, China, Sweden, Irish. We are all different minded politically and military but come together for this one cause," James wrote.