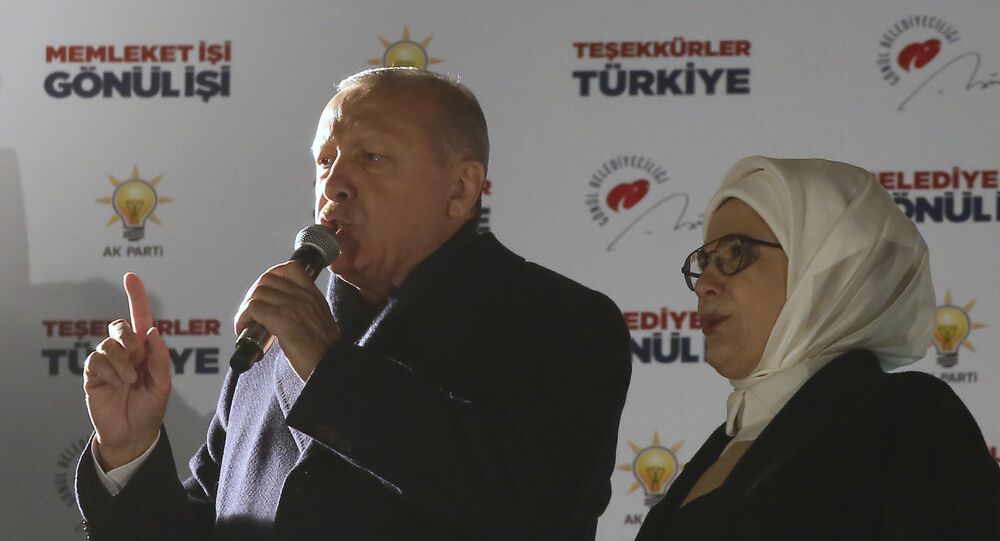 “Our people have made us winners of the elections for the 15th time in a row. Candidates from AKP, or the bloc [of AKP and the Nationalist Movement Party, MHP] won the elections in 24 provinces, 538 districts, 200 rural settlements. We have won in 778 municipalities, including mayoral elections in 16 big cities”, Erdogan said addressing AKP supporters in Ankara.

On Sunday, Turkey held municipal elections with voters electing mayors of cities, provincial capitals, and municipal districts, as well as local assembly representatives and village administrators. He thanked all people, who supported his party in the Sunday elections, especially the Kurds living in the southeastern part of the country.

“According to our data, [Ekrem] Imamoglu has won in Istanbul. We have also won in Ankara, Izmir, Adana, Antalya, Artvin, Ardahan, Bolu”, Kilicdaroglu said addressing CHP supporters in Ankara. He also said that his party faced significant political pressure during the election campaign.

A ccording to the Anadolu news agency, the AKP-MHP bloc gathered 51.7 percent of votes in the municipal elections, while the bloc comprised of the CHP and the Good Party (IYI) got 37.6 percent, with 91.15 percent of votes having been counted.

In Istanbul, CHP’s Imamoglu and AKP’s Binali Yildirim are involved in a neck-and-neck race, with the latter having received 48.71 percent of votes against Imamoglu’s 48.65 percent after 98 percent of ballots having been counted. Despite the fact that the final results of the vote in Istanbul have not been announced yet, Yildirim has already declared his victory.