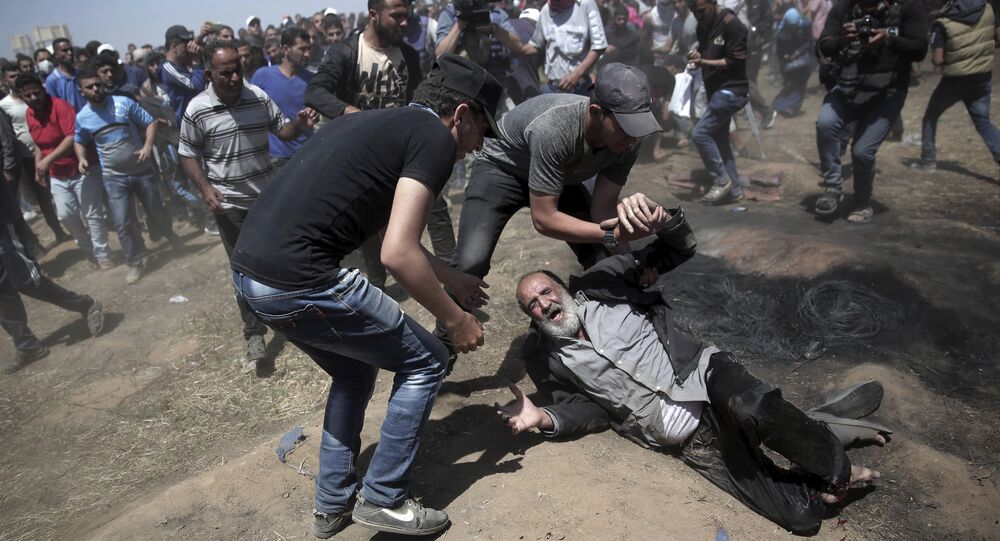 A Palestinian reportedly died from a head wound in Gaza Strip border clashes as Saturday marks the first anniversary of the beginning of weekly protests along the Israel-Gaza border, known as the “Great March of Return”.

The Palestinian Islamic Jihad (PIJ) militant group has threatened to unleash war against Israel if Palestinian civilians are killed during Saturday’s mass protests in Gaza to mark a year since the start of the “Great March of Return”.

The threat came after a spokesman for the Al-Quds Brigades, the PIJ’s militant wing, urged Palestinians to join the protests in a video posted on the group’s website.

“We caution the Zionist enemy against the spilling of Palestinian blood and emphasize that killing civilians will not bring it anything other than war”, Hamza warned.

He spoke amid reports that the organisers of the “Great March of Return” protests plan to mark the first anniversary of the event with large-scale rallies along the borders of the Gaza Strip on Saturday.

Iyad Sarhan, spokesperson for the Israel Defence Forces (IDF), in turn, warned Palestinians against approaching or breaching the security fence near the Gaza border.

“Protect your lives, stay far away and keep the innocent far away from the flashpoints and terror elements in the Gaza Strip”, he said, urging the Palestinians to keep a distance of at least 300 meters”.

Earlier, the Israeli military stated that they had completed preparations ahead of Saturday, reinforcing the southern district with three additional infantry brigades, divisional headquarters and an artillery unit.

Visiting Israeli troops concentrated around the Gaza Strip on Thursday, Prime Minister Benjamin Netanyahu assured that he would not hesitate to launch a large-scale military campaign if other means did not work.

© AP Photo / Anja Niedringhaus
Gaza Needs ‘More Than Statements’ from UN to Stop Israeli Violence - Historian
The statement followed the escalation of tensions between Israel and the Palestinian militant group Hamas earlier this week as a rocket fired from Gaza destroyed a house and injured seven people in a densely populated Israeli neighbourhood, prompting return fire by the Israeli military on Hamas targets, located in the border areas of the Palestinian enclave.

The exchange of fire resumed on Wednesday after a brief hiatus on Tuesday, with Hamas then calling on Palestinians to attend the Saturday protests which have already reportedly claimed the life of a Palestinian.