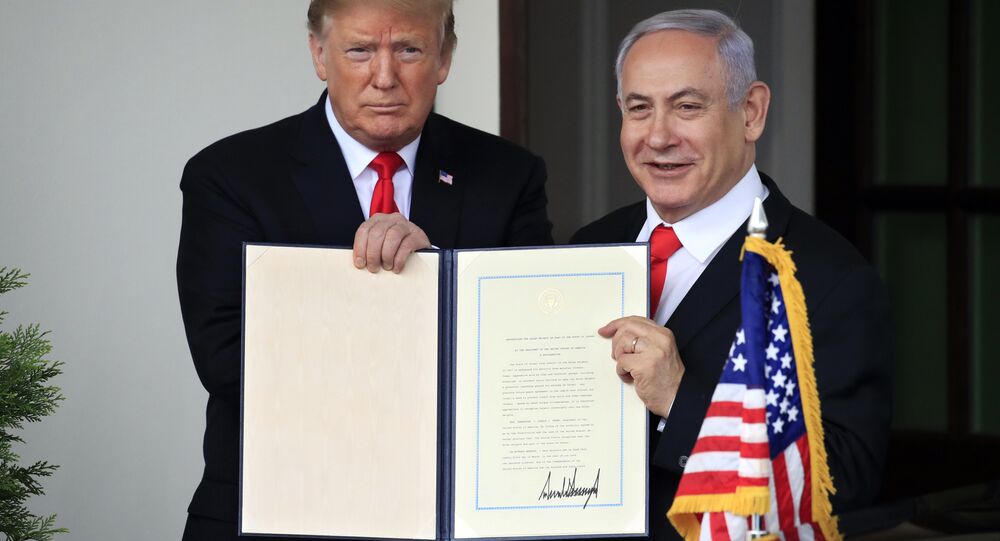 US President Donald Trump's decision to recognise the Golan Heights, which Israel seized from Syria during the 1967 Six-Day War and formally annexed in 1981, as a part of Israeli territory has drawn much criticism from around the globe.

Iranian President Hassan Rouhani said on Friday that Tehran would resist President Donald Trump's recognition of Israel's control over the Golan Heights, adding that the decision is "trampling on international regulations about" the region.

Trump’s lawless announcement on "Occupied Syrian Golan" after last year’s on "Occupied Al-Quds" is a sobering reminder for our Arab and Muslim brethren: US & Israel will offer you handshakes, but no matter how much you kowtow, they will still steal your lands. #LetUsUnite pic.twitter.com/f6zHx36R2Z

On Monday, Trump signed a presidential proclamation unilaterally recognising the contested territory as Israeli, sparking condemnation from the international community.

Syria's UN Ambassador Bashar Jaafari rebuked Trump over the move, saying that the United States has plenty of its own lands to give to Israel instead of other country’s territories.

A number of countries have accused the United States of violating international law by recognising the Golan as a part of Israel and warned that the decision would undermine the peace process in the Middle East.

© AFP 2021 / Jalaa Marey
Saudi Arabia Rejects US Recognition of Israeli Sovereignty Over Golans
Shortly after the announcement, Arab League Secretary-General Ahmed Aboul Gheit said that the US statement "does not change anything in the status of the Golan Heights", and that the territory occupied by Israel belongs to Syria.

The Golan Heights, a strategically important area, were seized by Israel from Syria during the Six-Day War in 1967, but it was only fourteen years later that the Israeli Knesset unilaterally proclaimed sovereignty over the territory. However, the UN Security Council declared that the motion was "null and void and without international legal effect".

In 2018, the UN General Assembly also adopted a resolution calling on Israel to immediately withdraw its forces from the region after the country staged local elections in the area on 30 October.