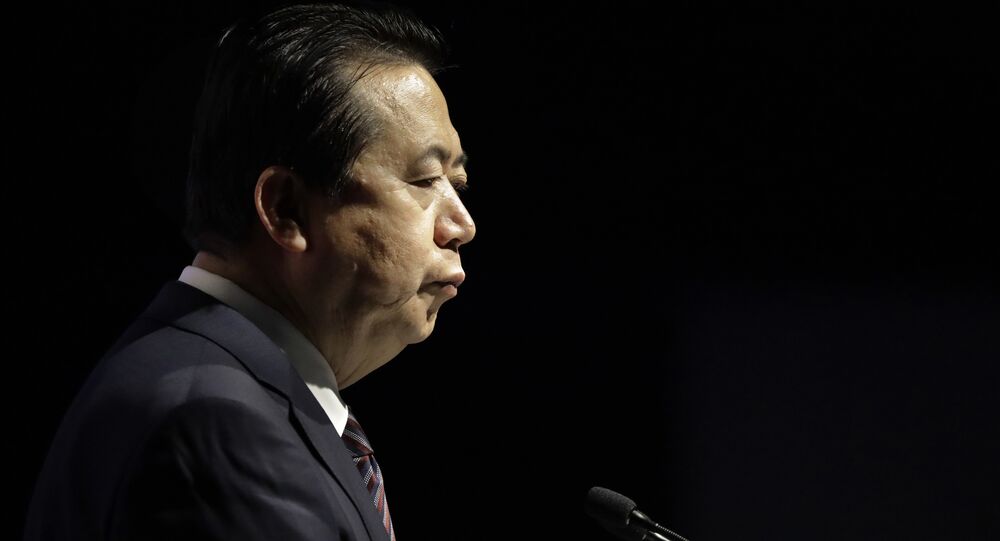 MOSCOW (Sputnik) - The former president of Interpol, Meng Hongwei, has been removed from all of his official positions and is expected to face legal prosecution for serious disciplinary violations, the anti-corruption watchdog of the ruling Chinese Communist Party (CCP) said in a statement.

"Upon investigation, Meng Hongwei has zero awareness of the party’s principle and organisational mentality. He failed to report his personal affairs in accordance with regulations and refused to carry out the decisions from the Central Committee of the Chinese Communist Party. He abused the power from his public position and wasted the nation’s assets to satisfy a lavish family lifestyle", the Central Commission for Discipline Inspection (CCDI) said in the statement on its official website.

The CCDI also accused Meng of abusing the power from his position to seek special rights and private interests for his wife and take bribes in exchange for favours for others.

Meng has been expelled from the CCP and his case handed to the prosecutor’s office to prepare for formal legal charges, the statement said.

© AP Photo / Du Yu/Xinhua
Hunting for Corrupt 'Tigers'?: Analyst Explains Why Ex-Interpol Head Under Inquiry in China
Last October, his wife, Grace Meng, reported to French authorities that her husband, who was serving as the president of Interpol at the time, went missing after travelling to China. Interpol, the global police coordination organisation based in France, said in a subsequent statement that Meng had resigned as the president of the organisation.

During press interviews last year, Grace spoke out against the secretive nature of China’s anti-corruption campaign and called on Chinese authorities to release more details on the whereabouts and condition of her husband.

READ MORE: Wife of Former Interpol Chief Fears Her Husband Might Be Dead After Detention

"He [Meng] is likely being held in 'liuzhi,' a form of secret detention effectively controlled by the Chinese Communist Party under which detainees are held incommunicado – without access to lawyers or relatives – for up to six months", Sophie Richardson, the China Director of Human Rights Watch, said in a statement on the mysterious disappearance of the former Interpol chief last year.

© AFP 2021 / ROSLAN RAHMAN
Missing Interpol Head’s Wife Received Knife Emoji From Him Before He Vanished
The human rights advocate called on international organisations like Interpol to act immediately on behalf of any Chinese member of their organisation who is facing similar scrutiny from Chinese authorities.

After taking over as the head of the CCP in late 2012, Chinese President Xi Jinping launched a sweeping anti-corruption campaign, which critics viewed as part of his efforts to remove political rivals and consolidate power. A number of top Chinese officials, including former security chief Zhou Yongkang and rising political rival Bo Xilai, have all been sentenced to long prison terms on corruption charges.