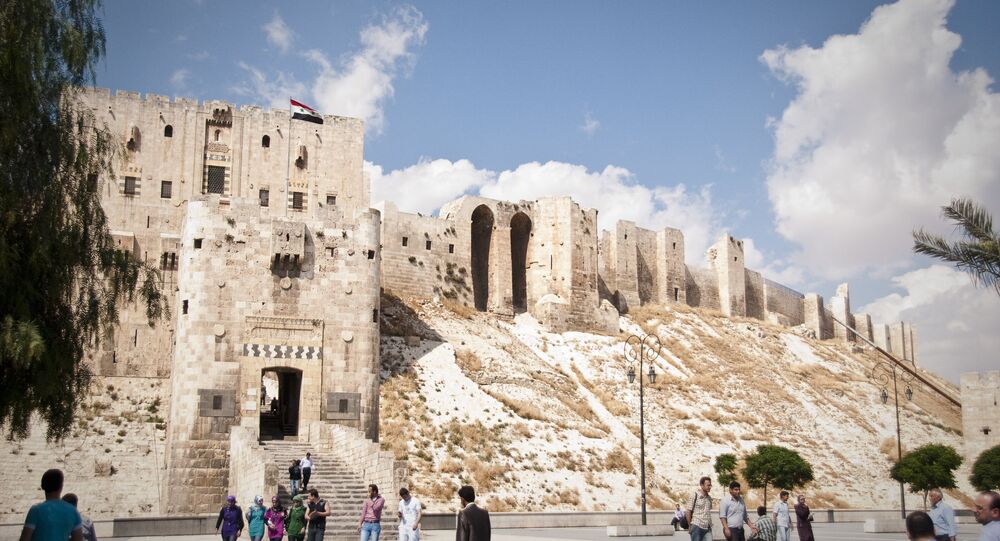 During brutal street fighting for control of the city, terrorists managed to blow up a portion of the ancient UNESCO Heritage Site, with the ancient castle structure helping to defend Syrian troops besieged by jihadists in neighbouring areas for years on end before Aleppo was finally completely liberated in late 2016.

The Syrian Arab News Agency has released footage shot at the entrance to the Aleppo Citadel, showing a city teeming with life, as tourists and residents enter and exit the citadel, while local shop owners and street vendors offer their merchandise to passerby on a sunny spring day.

The video marks a stark contrast to images of the UNESCO World Heritage Site from less than two years ago, when the ancient castle was surrounded by piles of rubble, with part of the structure itself destroyed following a terrorist bombing attack on a tunnel under its western gate.

Aleppo was opened to the public in late December 2016, immediately after terrorists were driven out of the majority of the city's districts. Russian sappers helped clear the area of mines and boobytraps. The strategic hilltop citadel itself was cleared by Syrian troops in 2013, but then became encircled, leading to years of brutal fighting for control of the castle.

1 / 5
© Sputnik / Michael Alaeddin
The Citadel, a formidable fortress built on the high hill in the heart of Aleppo, joined the UNESCO World Heritage site list in 1986.

The Citadel of Aleppo was recognised as a UNESCO World Heritage Site in 1986, and is thought to be one of the oldest and largest ancient castles in the world, built and rebuilt repeatedly between the 3rd millennium BC to the 12th century AD, and being stormed by Roman legionnaires, the Crusaders, Alexander the Great, Tamerlane, the Mongols and the Ottomans during its rich history. According to archeologists, the oldest structure discovered within the citadel's walls is over 10,000 years old.

Aleppo was Syria's largest city before the start of the foreign-backed civil conflict in 2011, and has suffered from years of intense urban combat. In 2017, Syrian authorities estimated that up to 80 percent of Aleppo's Old City suffered damage due to the war, with restoration efforts expected to cost as much as $35-40 billion. While the city itself has been completely liberated, terrorists holed up in the city's suburbs continue to periodically shell the city. Last week, two children were killed after their school bus came under fire by terrorist snipers.