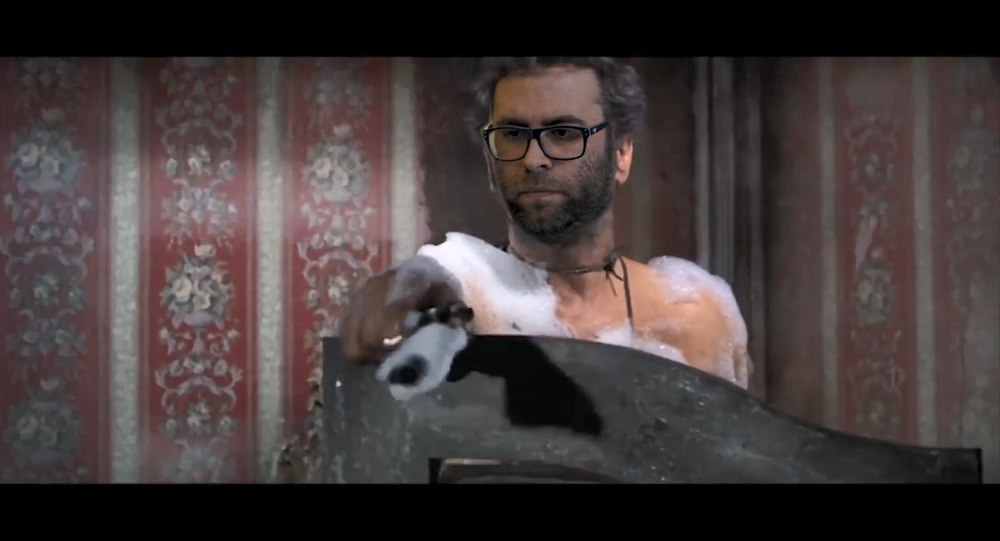 An Israeli Knesset member has filed a complaint against a fellow legislator for a campaign ad showing the man shooting him. It’s only the latest controversial ad in the lead-up to Israel’s parliamentary elections April 9.

An ad posted on Facebook Tuesday by MK Oren Hazan, founder of the right-wing Tzomet party, shows him shooting MK Jamal Zahalka, who chairs the Arab-majority Balad party. Zahalka has filed a complaint for incitement to murder and tried to get Facebook to remove the ad for its racist, violent and inciting content.

© AP Photo / Ariel Schalit
Jewish Home MK Tells Palestinian Colleagues ‘Israel is Not Your Country’
The campaign ad is based on a scene from the 1966 Spaghetti Western film "The Good, The Bad, and the Ugly" in which Tuco, the fast-talking bandit, shoots the one-armed bounty hunter sent to kill him. However, in this version, Hazan's face is superimposed over Tuco, who sits in the bath, and Zahalka's face over that of the one-armed man.

In the real scene, which you can watch here, Tuco's final line after surprising his would-be assassin with a pistol concealed in the bath bubbles is: "When you have to shoot, shoot. Don't talk!"

The video's caption tells voters to vote for Tzomet, the only party that will "expel the terror supporters from the Knesset."

"This is not a movie; instead it is a call for murder," Zahalka said Tuesday, Haaretz reported. "In an atmosphere which fuels incitement against the Arab public and its representatives, this is dangerous — very dangerous."

"Oren Hazan, in addition to his being a terrifying racist, has proven to us time after time how low he is ready to go in order to win a few votes while fueling hatred of Arabs," said a spokesman for Zahalka, who said that "this disgusting video is just one example of many" incidents of anti-Arab racism.

But Hazan fired back, so to speak, denying the video was racist and telling Haaretz, "The terrorist Zahalka's chutzpah and cynicism has no limits. He makes cynical use of Israeli democracy, like the rest of his terrorist colleagues." He added, "Zahalka was convicted of terrorism and exploited, along with his comrades, the helpers of Arafat, the Knesset stage to incite to murder IDF soldiers and Israeli civilians, incitement whose results we see daily."

Hazan's comments refer to Zahalka's time as a teenager, when he was convicted of being a member of the Palestine Liberation Organization (PLO) at a time when it was outlawed in Israel, and given a two-year prison sentence.

Zahalka is one of only three MKs representing the Joint List, a political alliance of Arab-dominated parties from disparate political persuasions who came together in 2015 when a change in election rules threatened to exclude them all from the legislature. His party, al-Balad, is a left-wing group that opposes the idea of a Jews-only state and says its mission is to "struggle to transform the state of Israel into a democracy for all its citizens, irrespective of national or ethnic identity."

However, Hazan's comments are nothing new for him, either. In March 2017, he claimed during a Knesset debate with Palestinian Israeli MK Ahmed Tibi, "We're gonna shut your mouths, and we're going to speak the truth. There is no Palestinian people. And there has never been a Palestinian people."

The Tzomet ad isn't the only controversial one to come out of Israel's Knesset election campaign. On Monday, Israeli Justice Minister Ayelet Shaked drew ire for a puzzling ad that spoofed sultry perfume advertisements, and in which she sprayed herself with a scent marked "fascism" and said to the camera, "Smells like democracy to me." Shaked is a member of the far-right Jewish Home party, which some have likened to being "Israel's KKK," Sputnik reported.