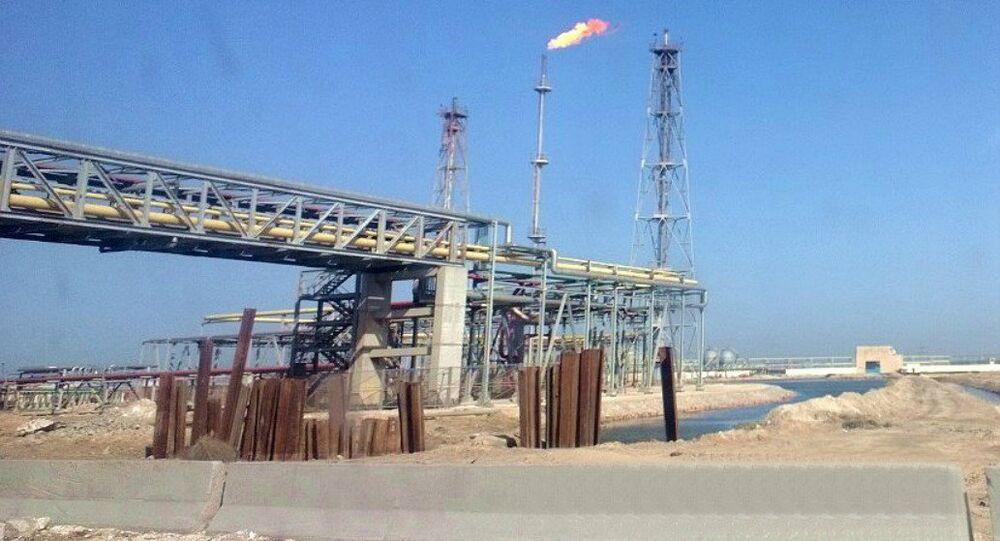 HOUSTON (Sputnik) - Egypt is not planning to join the Organization of the Petroleum Exporting Countries (OPEC) for the time being, Tarek El Molla, Egyptian minister of petroleum and mineral resources, told Sputnik on Wednesday on the sidelines of the CERAWeek conference in the US city Houston.

OPEC chief Mohammad Barkindo said Tuesday that Egypt did not submit a membership bid yet but that the organization would be happy to see Egypt in its ranks.

"Not for the time being," El Molla said, when asked whether Egypt was considering to join OPEC.

He stressed that Egypt already had the status of an OPEC observer nation.

"We are already observers in OPEC. I cannot join OPEC now because I am currently an importer of crude. I am importing crude, so I cannot join," El Molla said.

The minister explained that while Egypt was now considering cutting its oil production, it would not be easy for the country to make this step.

"We are still subsidizing our fuel, and we have a program to reform and to remove the subsidies. Hence, we can't be in a position… for joining OPEC," El Molla concluded.

Media reports emerged recently that Egypt could replace Austria as the venue for the next OPEC-non-OPEC meeting.

OPEC Secretary General Mohammad Barkindo confirmed to Sputnik on Monday that Vienna would host the upcoming 17-18 April meeting between OPEC member states and non-cartel producers, as planned. He added that he could not currently say whether Cairo could host future OPEC-non-OPEC meetings.

El Molla noted that Egypt would like Russia to participate in more projects in the country and to achieve mutually beneficial results.

"We have already many companies operating in Egypt. We have Lukoil, we have Rosneft. We want them to join us in all the expansion that we have and in many projects that we have," the minister said.

El Molla noted that Cairo would like to expand energy cooperation with Russia in all areas.

"In everything-upstream, downstream, midstream," he said.

Egypt always welcomes Russia, and the relationship between the two countries is at a very good level, the minister said.

"[Egyptian] President [Abdel Fattah] Sisi and [Russian] President [Vladimir] Putin are very good friends. They are supportive of our reforms in our country and there is complete alignment between the two countries. We welcome always Russian investments," he said.

"They are all friends," he added.

Anti-Russian sanctions and their impact on Russian companies in Egypt

Tarek El Molla stated that Western sanctions against Moscow are not hindering the work of Russian energy companies doing business in Egypt.

"No it didn't pose any problems for Russians to work in Egypt," the minister said when asked the relevant question.

In 2014, relations between Russia and the West deteriorated over the former's alleged involvement in the Ukrainian conflict and Crimea's reunification with Russia following a referendum.

© Sputnik / Andrey Chapligin
Russia, Egypt Mull Intensifying Efforts to Resolve Syria, Libya Crises - Moscow
The United States and the European Union have since imposed several rounds of sanctions on Russia's energy, banking, defense and other sectors, as well as on a number of Russian officials. Moscow has repeatedly denied the allegations and reacted with countermeasures against the Western nations that targeted it with sanctions.

Russian oil giant Rosneft is involved in production at the Zohr gas field in Egypt. Rosneft owns 30 percent in the project, while the Italian Eni S.p.A has a 60-percent share, and BP owns a 10-percent stake. Lukoil, Eni and Japan's Mitsui are the shareholders in the joint venture to develop Meleiha Block, which is located in the Egypt's Western Desert. Eni holds 56 percent of the project's shares, while Lukoil has 24 percent and Mitsui 20 percent.