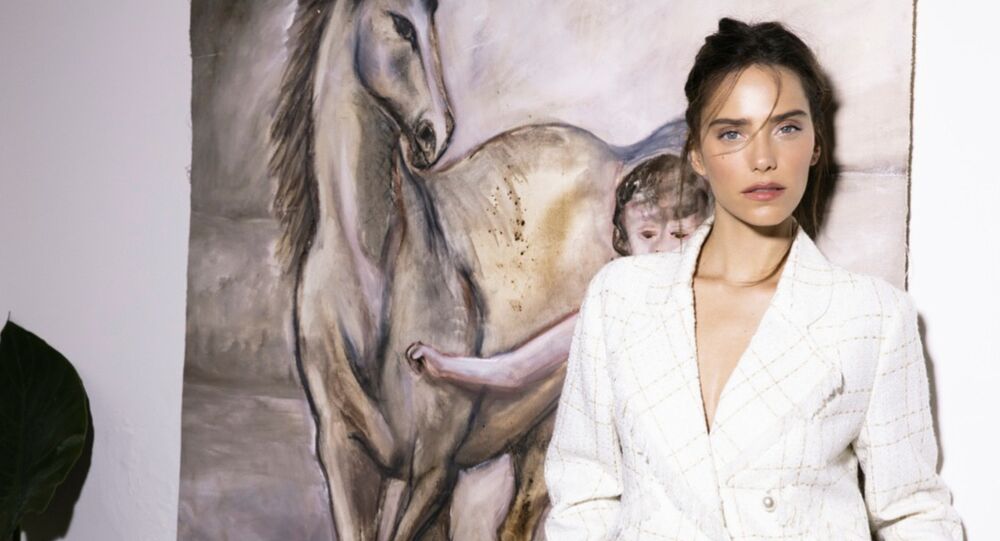 Celebrity actress Rotem Sela believes that there is nothing wrong with Arabs living in the country, since Israel is a “country for all its citizens” without exception, with the statement prompting a correction from Prime Minister Benjamin Netanyahu.

According to Israeli Prime Minister Benjamin Netanyahu, the State of Israel belongs solely to the Jews, with his statement coming in response to a comment by Israeli actress Rotem Sela on the Israeli culture minister’s recent interview.

"Miri Regev sits there and explains to Rina Matzliach that the public needs to watch out, because if Benny Gantz is elected he'll need to form a government with Arabs", Sela  wrote in her Instagram story, to the joy of her over 800,000-strong army of followers.

"Rina Matzliach stayed silent. And I ask myself why Rina doesn't ask her in shock – 'and what's the problem with Arabs???' Oh my god, there are also Arab citizens in this country", she wrote, stressing that Israel is “a country for all its citizens”.

“And every person was born equal. Arabs, too, God help us, are human beings. And so are the Druze. And so are gays, by the way, and lesbians, and…shock…leftists", she said, admitting though, that despite “disgusting comments”, she treats everyone with affection.

The comments prompted Benjamin Netanyahu to respond on Sunday: he uploaded a snapshot of himself posing in front of an Israeli flag, captioning the picture as follows:

“Dear Rotem, an important correction: Israel is not a state of all its citizens. According to the Nation-State Law that we passed, Israel is the nation-state of the Jewish People — and them alone. As you wrote, there's no problem with the Arab citizens of Israel – they have the same rights as us all and the Likud government has invested in the Arab sector more than any other government".

He continued by saying that Likud only seeks to sharpen “the central point of these elections: it's either a strong right-wing government led by me, or Yair Lapid and Benny Gantz's left-wing government with the support of the Arab parties”.

He went on to state that Lapid and Gantz have no other way to form a government, while a government “like this will undermine the security of the state and citizens”. “The decision – another month at the ballot box. Have a nice day”, he rounded off.

The culture minister also weighed in on the debate, addressing Rotem on Sunday: “We don't have a problem with Arabs. Our party has more than a few Arab, Druze, and Christian members. We have a problem with the hypocrisy and masquerade of Lapid and Gantz, who are trying with all their might to hide from the public that they are the left disguised as the centre", he was cited by Israeli media as saying.

Crowds, however, rushed to throw their weight behind the Israeli actress on Twitter, applauding her bravery vis-à-vis “religious extremist Netanyahu”:

If you needed more proof that mainstream Israelis are pro Arabs and anti Netanyahu, I have two words for you:
Rotem Sela.

Kudos to Rotem Sela. And shame on Netanyahu. We are living in the 21st century. You can't practice segregation and call yourself a democracy at the same time. https://t.co/Sl2Us4tdDO

decent person rotem sela, no doubt religious extremist like @netanyahu will attack her for her kind and TRUE words

There were those, meanwhile, who would more likely appreciate Netanyahu's stance:

Netanyahu's statement about Israel belonging to Jews only & not to the rest of its citizens should not come as a surprise. He said it in Hebrew for a reason: this is the normative approach within Israel. It will get him more votes on April 9. Any other view is considered treason.

There are many ways to criticize Israel w/o being anti-Semitic, but one of the simplest is just to make it about *Israel*. DO go hard after Netanyahu and his government's policies. DON'T fulminate about the "allegiances" of Americans or American Jews. Those are totally different!

In case anyone forgot, Israeli Prime Minister Benjamin @netanyahu reminds us (in an @instagram spat w an actress/model) that Israel is *not* a country for all its citizens — Israel is a country for Jews and only for Jews pic.twitter.com/1ITJIpnwm0