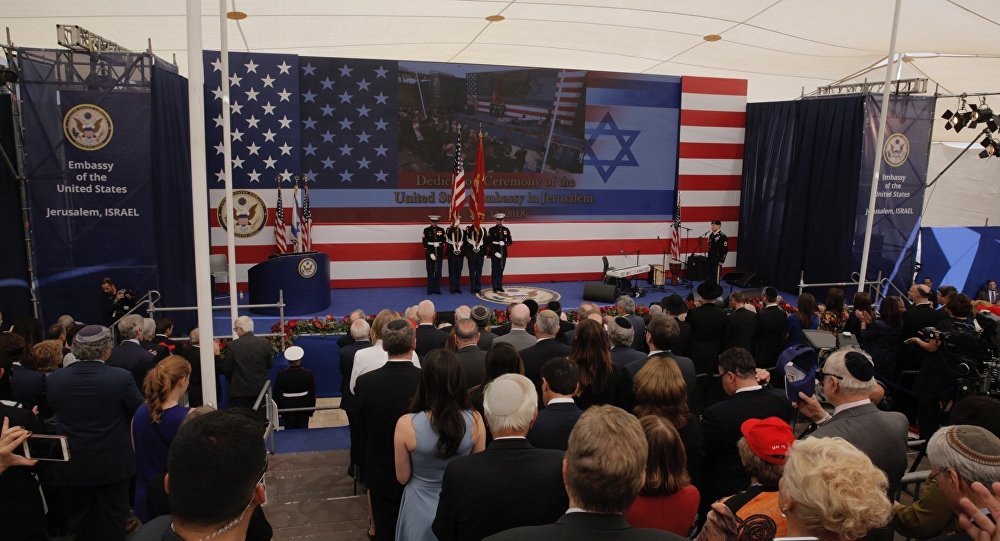 MOSCOW (Sputnik) - The United States has merged its Consulate General in Jerusalem, which served Palestinians, and its new Embassy in Israel into a single diplomatic mission.

“On March 4, 2019, U.S. Consulate General Jerusalem will merge into U.S. Embassy Jerusalem to form a single diplomatic mission … This decision was driven by our global efforts to increase the efficiency and effectiveness of our diplomatic engagements and operations,” deputy spokesperson Robert Palladino said in a Sunday statement.

Palladino stressed that the move “does not signal a change of U.S. policy on Jerusalem, the West Bank, or the Gaza Strip.”

“As the President [Donald Trump] has stated, the United States continues to take no position on final status issues, including boundaries or borders. The specific boundaries of Israeli sovereignty in Jerusalem are subject to final status negotiations between the parties,” he said.

The deputy spokesperson also reiterated the US commitment to efforts to achieve “a lasting and comprehensive peace that offers a brighter future to Israel and the Palestinians.”

Until now, US relations with the Palestinian Authority have been conducted through the Consulate General in Jerusalem, making the mission a de facto embassy of the country for Palestine, which Washington has not yet officially recognised as a state. The planned merger was first announced back in October.

© CC0
Abbas Adviser Calls Moving Israeli Capital to Jerusalem 'Legal Apartheid'
Palestinian officials have repeatedly stated that the merger of the US embassy and the consulate in Jerusalem could potentially reduce the level of the US representation in the Palestinian National Authority and reinforce Israel's claim to the control over Jerusalem.

Both Israelis and Palestinians see Jerusalem as their capital, and the status of the holy city has long been regarded as a matter that must be resolved through a Palestinian-Israeli peace process. In May, the United States decided to relocate its embassy in Israel from Tel Aviv to Jerusalem, provoking a huge backlash from Palestinians, the Arab world and number of other nations opposing any unilateral moves with regard to the holy city's status.